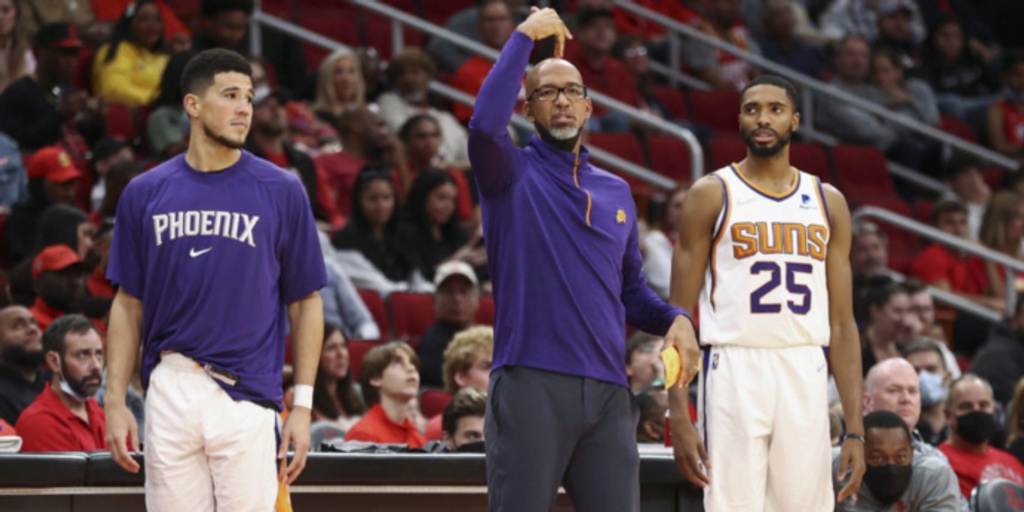 Last week, BasketballNews.com dished out its first edition of NBA Power Rankings for the 2021-22 season. Now, nearly one month into the campaign, Tommy Beer is back with his latest version.

The two top-rated teams in this week's ranking's square off against each other Tuesday night in Brooklyn.

The Warriors had their seven-game winning streak snapped Sunday night in Charlotte, and head to Brooklyn on Tuesday evening in a matchup between the two best teams in the league thus far this season. Tuesday's contest also features a showdown between the reigning Eastern Conference and Western Conference NBA Players of the Week: Kevin Durant and Stephen Curry, who averaged 34.8 points, 5.5 rebounds and 7.8 assists per game last week.

Just how efficient has the aforementioned Kevin Durant been this season, you ask? Incredibly, KD has scored 415 points on just 263 field goal attempts. To put those numbers in perspective, consider this: Curry has scored 365 points on 265 FGAs. And Boston's Jayson Tatum has scored 109 fewer points (306) than Durant despite having attempted 28 more shots from the floor (291) this season. It's genuinely remarkable how well KD has played since recovering from his torn Achilles.

On Monday, the Suns welcomed back Deandre Ayton (who had missed five games due to a right lower leg contusion), and the big man racked up 22 points (10-of-14 shooting) and 12 rebounds to help carry Phoenix to its ninth straight win. That's the league's longest current winning streak, and the Suns' longest streak in over a decade (they won 10 in a row from March 14 to April 2, 2010).

When the Bulls inked DeMar DeRozan and Lonzo Ball to big contracts over the summer, they envisioned them performing as well as the duo did in Monday's night's pounding of the Lakers. DeRozan converted 15-of-23 attempts and made all six of his free throws en route to a season-high 38 points. Lonzo shot 10-of-13 from the field and knocked down seven three-pointers for a season-high 27 points, to go along with 7 rebounds and 8 assists. The Bulls have won four of their last five, with those four wins coming against the Nets and Mavs, plus the Lakers and Clippers on a road back-to-back.

The Wiz outlasted the Pelicans on Monday night to secure their fifth consecutive victory. Washington has won at least 10 of their first 13 games to start a season for the first time in over 40 years (they opened the 1974-75 season with an 11-2 record). Editor's Note: Our Spencer Davies recently spoke with Wes Unseld Jr. and Kyle Kuzma about Washington's developing defensive identity.

Miami was forced to play without Jimmy Butler (sprained right ankle) and Bam Adebayo (bruised left knee) Monday night in Oklahoma City, but Tyler Herro scored 26 points to help propel the Heat past the Thunder. After a relatively disappointing sophomore season, Herro has bounced back in a big way this year. Through Miami's first 14 games, Herro is averaging 21.9 points, 5.7 rebounds, 3.9 assists and 2.8 made triples while posting an Effective Field Goal Percentage of 53.7%.

Kristaps Porzingis followed up a 32-point explosion Friday with 29 more points in a 111-101 win over the Nuggets on Monday. However, unfortunately for Dallas, Luka Doncic limped off the court after Austin Rivers fell on his left ankle in the final minute of Monday's victory. The Mavs play the red-hot Suns twice this week.

After capturing his first MVP award in 2020-21, Nikola Jokic might, somehow, be playing at an even higher level this season. Not only is The Joker averaging a mind-boggling 26/13/6 stat line to go with 1.7 made treys per contest, but he is also shooting a career-high 59.3% from the floor.

Utah stormed out of the gates this season, winning 7 of its first 8 contests. However, the Jazz's defense has abandoned them of late, as they're allowing over 114 points per 100 possessions during a current five-game stretch. Utah will look to get back on track Tuesday night vs. Philadelphia.

If you were looking for a reminder of just how important Joel Embiid is to the success of the Sixers, last week was Exhibit A. Embiid entered the NBA's health and safety protocols last Monday after reportedly testing positive for COVID-19. Consequently, the big man missed all four games the 76ers played, and Philly lost each contest.

Rookie sensation Evan Mobley entered Monday's matchup with Boston on a heater, averaging 19.6 points, 7.4 rebounds, 2.2 assists, 1.2 triples and 2.0 blocks over Cleveland's five previous contests. However, the kid came crashing back to earth vs. the Celtics, missing all 11 of his field-goal attempts prior to exiting the game with a right elbow sprain. The Cavs then announced Tuesday afternoon that Mobley would miss 2-to-4 weeks due to the elbow injury.

The Clippers were riding a seven-game winning streak into Sunday's showdown with Chicago before the Bulls handed L.A. its first loss since the Friday before Halloween. Still, Clippers fans got some encouraging news on Sunday from head coach Tyronn Lue. He told reporters that Marcus Morris has made progress in his recovery from a left knee injury, and that it may be possible Morris could travel with the team on its upcoming two-game road trip later this week.

The Bucks spanked the Nets by 23 points on opening night. That was the last time the team had all five of its starters healthy. Fortunately for Milwaukee, Khris Middleton (health and safety protocols) is reportedly expected to return Wednesday against the Lakers after missing eight consecutive contests. In addition, the Bucks begin their longest home stand of the season (five games) starting Wednesday vs. the Lakers.

The Knicks got a much-needed victory on Monday vs. the Pacers. It was their backup backcourt of Derrick Rose and Immanuel Quickly that led the way. That combo has been, by far, New York's most effective two-man lineup this season; the Knicks have outscored their opponents by 89 points in the 183 minutes D-Rose and IQ have been on the floor together. In contrast, New York has been outscored by 75 points in the 290 minutes that the starting backcourt of Kemba Walker and Evan Fournier have played together. Over the Knicks' last four games, Quickley is averaging 13.3 points and 3.0 made treys while shooting 51.5% from the floor, 60% from downtown and 87.5% from the free-throw line.

The Lakers lost on Monday in blowout fashion to the Bulls, but L.A. fans were once again treated to another impressive performance from Talen Horton-Tucker. THT started and racked up a career-high 28 points to go along with 6 rebounds, 2 assists and a steal in 37 minutes. And, according to Adrian Wojnarowski of ESPN, there is "growing optimism" that LeBron James (abdominal strain) could return to action on Friday in Boston.

The surging Hornets put an end to the Warriors' seven-game win streak on Sunday. It was thanks in large part to another phenomenal all-around effort from LaMelo Ball, who racked up 21 points, 7 rebounds, 5 assists and 3 steals to go with four triples. Despite turning 20 years old just a few months ago, Ball is averaging 19.3 points, 7.5 rebounds, 7.1 assists, 2.1 steals and 2.7 made treys per game. Only three players in NBA history have ever finished a season averaging more than 15 points, 7 boards and 7 dimes before turning 21: Magic Johnson in 1979-80, LeBron James in 2004-05 and Luka Doncic in 2019-20.

where does lamelo get his ideas pic.twitter.com/IHyFafKDBY

In early November, Dennis Schroder was inserted into the starting lineup to replace Jaylen Brown (strained right hamstring), and Schroder has filled in admirably. He is averaging 24.0 points (on 51% shooting), 4.2 rebounds, and 3.8 dimes in his five consecutive starts. However, Celtics head coach Ime Udoka said Schroder would return to the bench once Brown is back. "We like our regular starting lineup," Udoka said. "Dennis is a pseudo sixth starter for us, coming off the bench and finishing games."

After losing three straight games, all by double-digits, a matchup with the hapless Rockets was just what the doctor ordered for the Grizzlies. Memphis blew out Houston by 34 points on Monday night, 136-102.

After missing Sunday's game vs. the Nuggets, Damian Lillard (abdomen) was back in action on Monday and led the Blazers to a 118-113 home win over Toronto. Lillard recorded 24 points, 8 assists, 4 rebounds, 2 steals, a block and cashed-in three treys. Portland 6-1 at home, but just 1-7 on the road.

The Raps have lost 5 of their last 6 games, and things don't get any easier in the near future. Toronto is just beginning a six-game road trip that will include stops in Utah and Golden State later this week.

The Hawks got a much-needed victory over the Magic on Monday, but received awful news over the weekend when they learned De'Andre Hunter would have to undergo surgery on a tendon in his right wrist that's expected to sideline him for roughly two months. And in Monday's victory, Kevin Huerter was forced to exit the game due to left hamstring tightness.

On Monday, the Pacers were held to just 10 points in the fourth quarter in their loss to the Knicks. Remarkably, Indiana didn't convert a single field goal attempt in the final seven minutes of regulation. The Pacers will look to get back in the win column Wednesday vs. the Pistons.

The Kings snapped a four-game losing streak on Monday vs. the lowly Pistons, but coach Luke Walton is on the hot seat. Sam Amick and Shams Charania of The Athletic reported Walton's job "will likely be in peril" if the Kings don't turn things around soon.

The Spurs have faced a demanding schedule early on, with 9 of their first 15 games on the road. And, despite having a positive point differential on the season (+1), they find themselves five games below .500. San Antonio is expected to welcome back Jakob Poeltl this week once his conditioning improves, as he works his way back from COVID.

Karl-Anthony Towns poured in a season-high 35 points to go along with 13 rebounds and 2 assists, but also committed a season-high-tying 7 turnovers in Monday's 99-96 loss to the Suns. The Wolves have now lost 8 of their last 9.

Karl Anthony Towns scored a season-high 35 points as the Wolves battled until the end with Phoenix but fell short 99-96. Full highlights ⤵ pic.twitter.com/x8gU14LE8R

OKC has lost two in a row, but Luguentz Dort has continued his impressive play. We know what he brings to the table on the defensive end, but over the Thunder's last four games, Dort is averaging 22.3 points, 4.3 rebounds and 2.8 made treys, while shooting 56.9% from the floor, 37.9% from beyond the arc and 85.7% from the charity stripe.

Jalen Suggs was unable to play Monday in Atlanta due to a right ankle sprain, which he suffered late in Saturday's home loss to the Wizards. However, Orlando head coach Jamahl Mosley said the team was "just being cautious," adding that Suggs went through shootaround Monday morning and is considered "day-to-day." Orlando's next game is Wednesday vs. the Knicks.

Brandon Ingram returned to action over the weekend after missing seven straight games due to a hip injury. However, ESPN's Brian Windhorst reported last Friday that he believes Zion Williamson (right foot surgery) is still "weeks away" from a return and won't be cleared to play until December.

Pistons fans haven't had much to cheer about this season, but they did get to enjoy No. 1 overall pick Cade Cunningham pouring in a career-high 25 points while also tallying 8 rebounds, 8 assists, 2 steals and five treys on Monday.

The Rockets are riding an embarrassing 12-game losing streak. And it's not as if these contests have been nail-biters. During this 12-game slide, Houston has been outscored by a whopping 169 points.