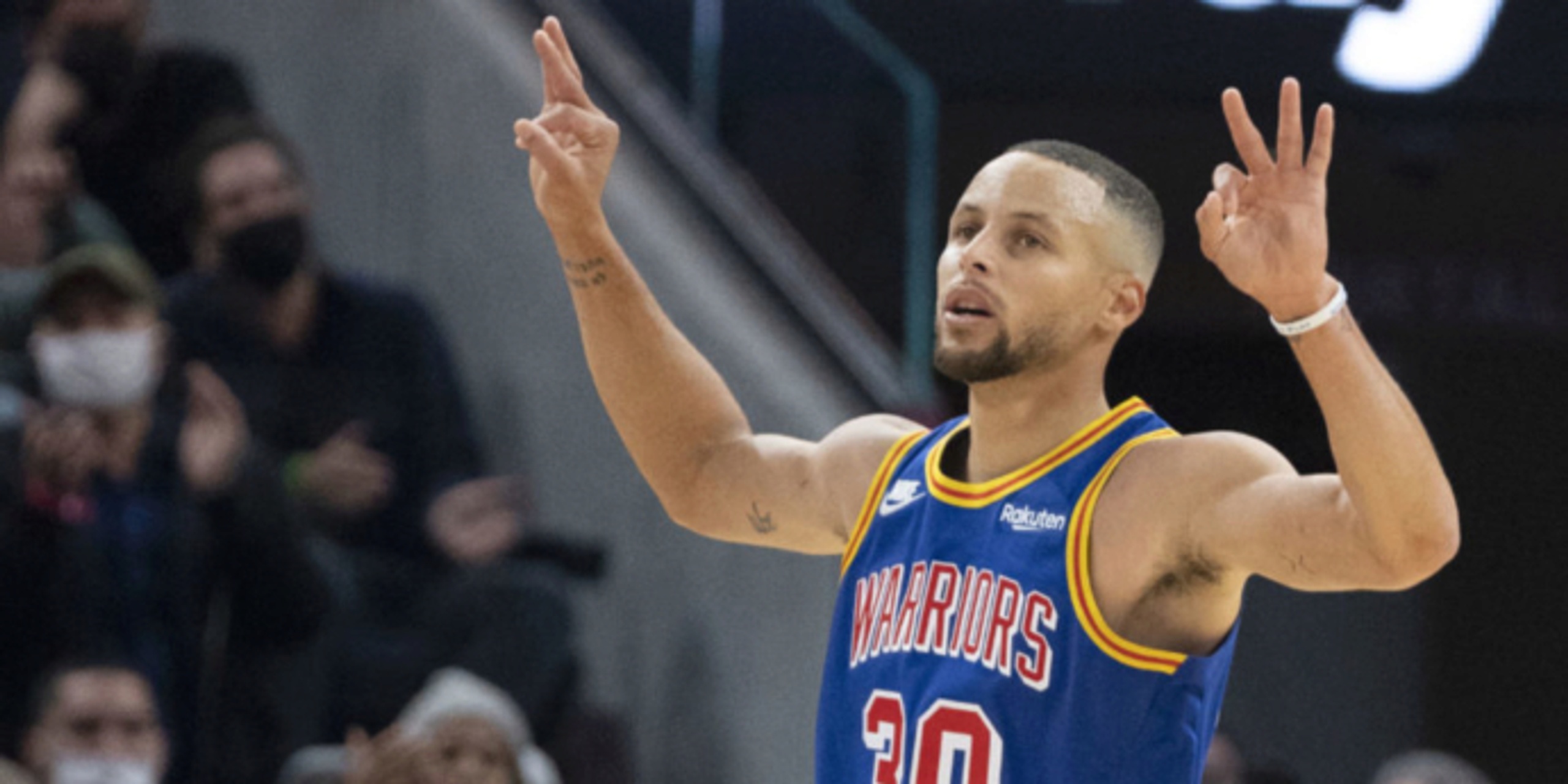 NBA Power Rankings: Warriors come in at No. 1

Thanks mainly to the incredible play of MVP-front-runner Stephen Curry, fresh off a 50-burger, the Golden State Warriors have won 9 of their first 10 games this season and propelled themselves to the top of the BasketballNews.com Power Rankings.

The oldest player in NBA history with 50+ points and 10+ assists in a single game: Stephen Curry.@UAbasketball || Second Look pic.twitter.com/QhnO72K6Id

In Monday night's blowout victory over the Hawks, Steph Curry reminded everybody why so many folks consider him the best long-range sniper in NBA history. He poured in an NBA season-high 50 points to go along with nine 3-pointers, ten assists and seven rebounds. It was the 35th time in Steph's career he knocked down at least nine treys in a single game. He's already established himself as the greatest shooter of all time. It's no longer up for debate.

On Monday afternoon, the Sixers announced that Joel Embiid entered the NBA's health and safety protocols, which will force him to miss several games. Coach Doc Rivers told reporters that Embiid was "struggling" due to the illness. "It's not going great. Similar to Tobias (Harris)," Rivers said. "It clearly is a concern." In addition to Harris and Embiid, Sixers' Matisse Thybulle and Isaiah Joe are also sidelined due to COVID-19 protocols.

On Monday night, the Heat began a five-game,West Coast road trip in Denver and got off on the wrong foot, as the Nuggets whipped them 113-96. Miami has a back-to-back vs. the Lakers and Clippers on Wednesday and Thursday, before heading to Utah on Saturday night.

The Bulls notched arguably their best win of the season Monday night in a lopsided victory over the Nets. Chicago was down 78-76 entering the final frame but went on to score 42 points in the fourth quarter, outscoring the Nets by 25. It was the second-highest fourth-quarter point differential in Bulls franchise history.

The Jazz lost back-to-back games over the weekend, but it should be noted Utah had played six of its past seven games on the road. Looking forward, the Jazz play just five games over the next 11 days, and all five are at home.

The Nets had their five-game winning streak snapped Monday night in the Windy City, but Kevin Durant poured in 38 points to raise his league-leading scoring average to 29.5. LaMarcus Aldridge also chipped in 19 points vs. Chicago. He's been terrific for Brooklyn, averaging 14.0 points and 5.5 rebounds in 21.3 minutes off the bench over his last six games, while shooting 61.4% from the floor and 50% from downtown.

The Wizards continue to exceed expectations. In their most recent victories, the Wiz clamped down defensively on both the Grizzlies and the defending champion Bucks. After a disappointing season with the Lakers in 2020-21, Montrezl Harrell has been a beast in Washington, averaging 17.7 points, 9.1 rebounds and 1.3 blocks while shooting 63.6% from the floor and 82% from the stripe.

The Suns stumbled out of the gates this season, losing three of their first four contests. However, they are currently riding a five-game winning streak after beating the Sacramento Kings 109-104 on Monday night.

The Cavs have won four straight and have Cleveland fans extremely excited. The frontcourt combo of Evan Mobley and Jarrett Allen has been downright dominant of late. During the Cavs four-game win streak, Mobley and Allen are averaging a combined 38.0 points, 25.1 rebounds, 5.0 assists and 2.3 blocks.

The Knicks secured a much-needed victory over the short-handed Sixers on Monday night. Julius Randle led the way for New York, tallying 31 points, 12 rebounds, five made 3-pointers and three assists. It was the fourth time in his Knicks career that Randle had tallied at least 30 points, ten boards and five made treys, which ties Carmelo Anthony for the most such games in New York franchise history.

You know what Luka is going to bring to the table, but Jalen Brunson has been a critical cog in the Mavs' strong play of late. Dallas has won three of their last four games, and during this four-game stretch, Brunson is averaging 21.5 points (on 59.3% shooting), 6.5 rebounds and 4.3 assists.

Denver blew out the Heat Monday night thanks to an MVP performance from Nikola Jokic, who racked up 25 points, 15 rebounds and ten assists. However, he was ejected late in the game for shoving Markieff Morris to the court in retaliation for an elbow from Morris. Joker said he "felt bad, really bad" after the altercation. We'll see if the league suspends him.

The Raps welcomed back Pascal Siakam (left shoulder surgery) to the lineup last week, where he joined impressive rookie Scottie Barnes. After playing Barnes on Sunday, Nets superstar Kevin Durant walked away impressed. "You've got a lot of guys who love to compete and love to win, but what's more rare about Scottie Barnes is his IQ for the game, his length, his enthusiasm for the game. All of that stuff shines bright when you watch him play," Durant told reporters after the game. "He knows how to play the right way and he's only going to get better."

Ja Morant was at it again Monday night, scoring 33 points to go along with eight dimes and six boards in an inspired comeback over the Wolves. Memphis was down by 16 points with less than eight minutes remaining in regulation, but was able to force overtime and pull out the victory.

The good news is the Lakers were able to pull out a victory over the Hornets in overtime on Monday night. The bad news is Lebron James (abdominal strain) is still without a timeline for his return. Bill Oram of The Athletic reported over the weekend that Lebron could miss between 4-to-8 weeks.

The Bucks have been bad. There's no other way to say it. They've lost five of their past six games, and their one victory in that stretch was over the hapless Pistons. Yet, it's important to note that Milwaukee has been forced to pay without starters Khris Middleton (quarantined due to the NBA's Covid-19 health and safety protocols) and Brook Lopez (sidelined since he injured his back on opening night).

After stumbling out to a 1-4 record to start the 2020-21 campaign, the Clippers have righted the ship by winning four straight games. Between now and December 1st, L.A. plays 11 of their next 13 games at home.

The Hornets have dropped five straight, but LaMelo Ball, who exceeded expectations as a rookie, is playing at an elite level despite not yet being old enough to buy a drink legally. Over the Hornets' last six games, Ball is averaging a whopping 23.5 points, 8.0 assists, 7.7 rebounds, 1.8 steals and 3.0 made three-pointers, while shooting over 48% from the floor, 40.9% from downtown and 95% from the free-throw line.

As an aside, I'm not sure what's more shocking: The fact that LaMelo and Lonzo Ball have been just as good, or even better, than LaVar Ball predicted, or the fact that LaVar has been incredibly quiet and tight-lipped over the past year while his two boys have played so well!

The Hawks watched Steph Curry explode for 50 in their loss to the Golden State on Monday night. It was Atlanta's fourth straight defeat and sixth in their last seven contests. Atlanta is now just 1-6 on the road this season and is riding a five-game road losing skid. It doesn't get any easier, as they travel to Utah on Tuesday night.

Damian Lillard snapped out a massive shooting slump this weekend in a victory over the Lakers, scoring 25 points on 9-of-19 shooting. In the Blazers' previous seven contests, he shot just 32% from the floor and 24% from behind the arc.

The Pacers are finally getting back on track, winning three of their past four games. However, they face a week of tough matchups, starting with trips to Denver and Utah.

Following a brutal collapse to Chicago and Marcus Smart's controversial comments about his star teammates, the Celtics bounced back with victories over the Magic and Heat. This squad remains a tough team to figure out.

The Spurs' defense has been solid early on, but their offense has been brutal. San Antonio has yet to win consecutive contests this season.

This season, the Wolves played seven of their first eight games at home, but won only three of those contests. On Monday, they began a four-game road trip with a loss to the Grizzlies after blowing a 16-point lead in the fourth quarter. Over four days starting Wednesday, the Wolves play the Warriors in the Bay and the Clippers and Lakers in L.A.

Plenty of talented rookies struggle to make their initial transition to the NBA, and that has been the case with No. 5 overall pick Jalen Suggs, who is shooting below 31% from the floor and just 22% from three-point territory. And, on the season, Suggs has as many turnovers (39) as assists.

The Rockets were hoping Kevin Porter Jr. would take another step forward after his impressive debut season in Houston, but that hasn't been the case. KPJ has been incredibly inefficient, shooting 36.7% from the floor and below 30% from downtown. He is also averaging a whopping 4.5 turnovers per game.

After a couple of tough games to start his NBA career, No. 1 overall pick Cade Cunningham scored a combined 35 points in close losses to the Nets and Sixers last week. This week, Cunningham will take on No. 2 pick Jalen Green in Houston on Wednesday, No. 3 pick Evan Mobley in Cleveland on Friday and No. 5 pick Jalen Suggs in Orlando on Saturday.

We first learned in late September that Zion Williamson underwent surgery to repair a fracture in his right foot early in the offseason. At that time, Pelicans team president David Griffin said the team hoped to have Zion back in time to start the regular season. Yet, here we are in the second week of November, the Pels are already nine games under .500, and we still don't have a timeline on when he might return.

MORE:
NBA News

Nothing But Bets: NBA Projections for 11/9/21
With Collin Sexton sidelined, who's next man up for Cavs?

Featured News

Phil Handy: Kawhi Leonard 'wants to be great; it's all we'd ever talk about'
Feb 5 2021
Bill Russell’s No. 6 jersey to be retired throughout NBA
8h
How Rudy Gobert and Karl-Anthony Towns can work as Timberwolves' duo
12h
Through Her Eyes: How Chelsea Gray sees what you can't
yesterday
Jarrett Allen Q&A: Cavaliers' offseason, Basketball Without Borders
yesterday
Best Bets: NBA Western Conference over/under projections
2 days
Isaiah Livers is ready to rise up in second season with Pistons
4 days
Best bets for 2022-23 NBA Most Valuable Player award
5 days
Subscribe to our newsletter
SUBSCRIBE
Follow Us



Basketball News
Home
Podcasts
Scores
Draft
Stats
News
Charts
Contact
Contact Us
Advertise With Us
Terms Of Use
Privacy Policy
Do Not Sell My Personal Information
Cookie Policy
Download Our App!
Stay up-to-date on all things NBA
Copyright © BasketballNews.com 2020. All Rights Reserved.
