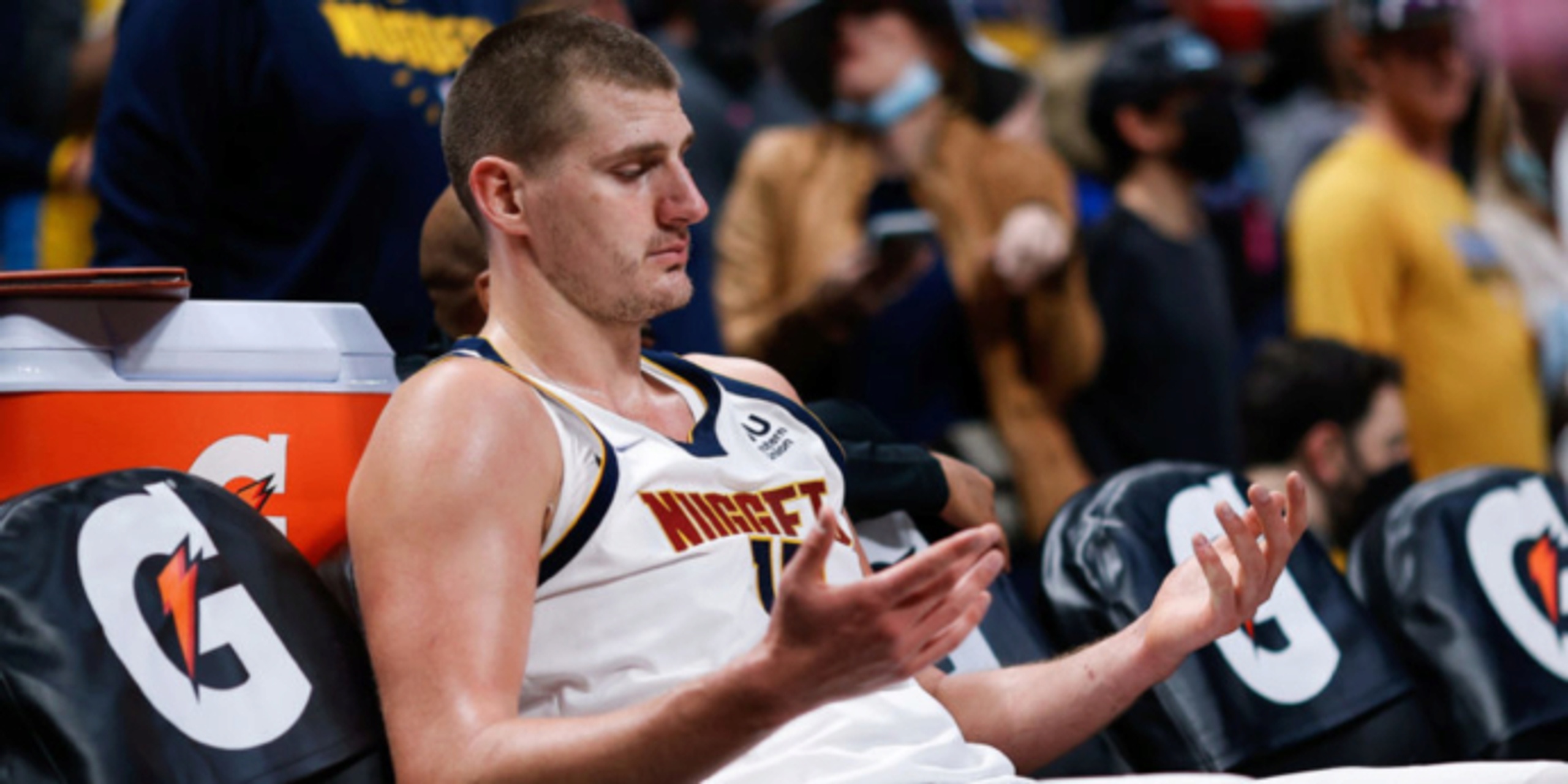 We're having the wrong conversation about Nikola Jokic

This is what it took? Taking an elbow to the ribs, then sending a forearm shiver to the back of the pain-disher?

Now, his brothers are involved, and everyone is brushing off their AP World History knowledge. Alright, man. Y'all got it.

I've given my thoughts on the ordeal. I don't think Markieff Morris should've made that kind of contact. There are take-fouls, and then there are take-that fouls. The Morris shot was the latter.

Jokic certainly didn't have to respond the way that he did. Frustration over the foul is one thing; putting dude on a stretcher is another. Add in the context of the Nuggets already missing Jamal Murray and Michael Porter Jr. due to injury, and the Jokic retaliation becomes even more inexcusable. He's too important to put himself at risk of suspension.

And to that point, it feels like the lede is being buried: Jokic is important. Too important for nonsense. But he's that important because of a fact — a conversation, at least — we (collectively) are seemingly afraid to acknowledge or discuss: He's the best player in the world right now.

Some may read that and roll their eyes, might even call it controversial.

Do you know how absurd it is for the reigning MVP — a guy playing better than he did last season, in which he won MVP — to be considered an unpopular choice in the "best player in the world" discussion? It is insane (in the membrane!) to me.

Let's start with this: Jokic is leading his team in everything right now.

Jokic's credentials offensively should be well-known by now. He's a legitimate three-level threat. In addition to his gaudy three-point percentage, he's also converting nearly 68% of his two-point shots.

He's done this despite being uncharacteristically off as a putback machine; per Synergy, he's converting 44.4% of his shots after offensive rebounds this season, a mark 20 percentage points lower than last sesaon (64.4%).

It helps that he's shooting 60% on post-ups. His combination of dizzying footwork, brute force and superb touch makes him nearly impossible to deal with. On any given possession, he can activate Backdown Punisher to get to his spots, Post-Hook Specialist to infuriate try-hards or Fade Ace to demoralize his foes.

Honestly, it's unfair to be this kind of scorer. The paint dominance is there, as is the proficiency from the mid-range area (59.1% from 8-16 feet) and three-point shooting. You can't give Jokic a sliver of space, which allows him to tap into his actual best skill: his passing.

Don't let the assist numbers from this year fool you; he's every bit of the elite passer he's always been. He gets some freebies as a handoff hub — his chemistry with Porter, in particular, has grown tremendously over the past year-and-a-half.

But the fun comes when Jokic gets to read or manipulate defenses. There aren't many players in league history — and none from the center position — that map out the floor as quickly as Jokic does. He doesn't just hit open teammates; he creates passing windows that don't exist to most elite passers.

He threads the needle to cutters, makes live-dribble reads and can manipulate weak-side helpers whenever he wants. Cheat a step too far, and Jokic will capitalize.

This is all amazing. No player in the league is slapping up 25-14-6 like Jokic is; Giannis Antetokounmpo (27-11-6) is really the only guy that comes close. Considering the gap in scoring versatility and passing ability between the two, I think it's more than fair to dub Jokic as a deadlier offensive threat.

To most, the defensive side of the ball is where Jokic has fallen short in "best player" conversations. A player with Jokic's, uh, limitations, are difficult to value on that end.

(Well, it is if you don't actually watch him.)

We know Jokic isn't a "Gobertian" rim-protector. He doesn't have the vertical pop to challenge drivers above the rim. Fine. That isn't the only way to get it done.

Throughout Jokic's career, the Nuggets (read: head coach Michael Malone) have opted to play him higher in pick-and-roll. Instead of dropping Jokic and giving drivers a pocket to attack, they play him at (or above) the level of the screen to make life more difficult.

Jokic has three things working for him. He's incredibly large, has quick and active hands and has a keen understanding of angles. Those factors work together to create havoc.

What's been interesting to watch is Jokic's growing comfort in drop coverage. His vertical limitations persist, but he's playing the gap with more purpose. There's a little more activity, stronger contests. He's flipping his hips a little better, allowing him to track ball-handlers in a smoother fashion.

(No, Jokic isn't a better defender than Brow, but you have to admit you didn't see that one coming.)

Here's more fun for ya: the Nuggets have the second-best defense in the NBA (100.4 defensive rating). With Jokic on the floor, that number drops to 94.1. Per Cleaning The Glass, opponents are getting to the rim much less, and shooting a ton more from mid-range with Jokic on the floor.

In fact, teams have gotten to the rim less with Jokic on the floor in every season of his career; the difference (-7.1%) has never been more stark than it has been this year.

It is virtually impossible to have a good defense — more so a no-questions-asked elite D — with a bad defender at the 5. You just can't do it. They're too important to a team's base. Unless you want to argue that Jokic has the 2018-19 Raptors around him 1-through-4, you have to attribute at least some of that success to him.

Jokic isn't just holding his own — he's actually been darn good while being asked to do multiple things. That doesn't mean he's without his flaws; it simply means his flaws aren't as pronounced as some would have you believe.

If a player is a top-three offensive talent (at worst), is an above-average defender and his team is nearly [checks notes] 34 points per 100 possessions better with him on the floor, shouldn't that guy be in strong contention for being the league's best player?

That checks out to me.

MORE:
Nuggets
NBA News

Gary Payton on son's success: 'I knew he could play in the league'
Nothing But Bets: NBA Projections for 11/9/21

Featured News

Phil Handy: Kawhi Leonard 'wants to be great; it's all we'd ever talk about'
Feb 5 2021
Bill Russell’s No. 6 jersey to be retired throughout NBA
8h
How Rudy Gobert and Karl-Anthony Towns can work as Timberwolves' duo
12h
Through Her Eyes: How Chelsea Gray sees what you can't
yesterday
Jarrett Allen Q&A: Cavaliers' offseason, Basketball Without Borders
yesterday
Best Bets: NBA Western Conference over/under projections
2 days
Isaiah Livers is ready to rise up in second season with Pistons
4 days
Best bets for 2022-23 NBA Most Valuable Player award
5 days
Subscribe to our newsletter
SUBSCRIBE
Follow Us



Basketball News
Home
Podcasts
Scores
Draft
Stats
News
Charts
Contact
Contact Us
Advertise With Us
Terms Of Use
Privacy Policy
Do Not Sell My Personal Information
Cookie Policy
Download Our App!
Stay up-to-date on all things NBA
Copyright © BasketballNews.com 2020. All Rights Reserved.
