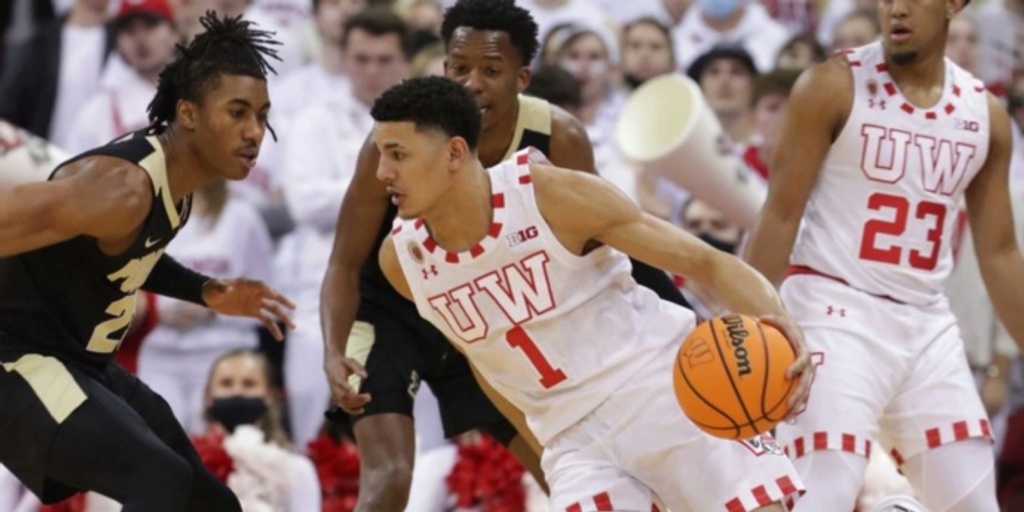 Here are the names to look out for in the Big Ten.

For the Boilermakers this season, Jaden Ivey is shooting career highs across the board and has propelled himself into top-three consideration. Ivey is a phenomenal athlete and a promising on-ball defender who has flashed great potential on the defensive end of the floor. His offense has taken a huge leap, as he's shown the ability to create space for himself, score on multiple levels and attack the rim at an elite level. Purdue is one of the best teams in America, and Ivey is a huge component of the team's success. He's one to keep an eye on near the top of the 2022 NBA Draft class.

At 6-foot-8 with a 6-foot-11 wingspan, Keegan Murray has a high motor and does a lot of the “little things'' that contribute to winning, and he is a terrific defender. Despite shooting an inefficient 29.6% from deep last season, Murray has shot and scored the ball at a much higher rate this season. In addition, his ability to attack closeouts and score from multiple levels has allowed him to carry a greater offensive load. Murray is a candidate for National Player of the Year and has played himself into top-10 consideration in the 2022 NBA Draft.

​​At 6-foot-5, Johnny Davis carries positional size and has become one of the most reliable scorers in the country. He can take his defender to the rim, is comfortable operating in the mid-range and has shown consistency from deep. He isn’t flashy, but is incredibly effective and decisive, which has resulted in a large jump in his free-throw rate. His combination of physicality and quick decision-making brings good versatility to his game. Davis has established himself as one of the best shooting guards in the country, and is a candidate for National Player of the Year. (Unfortunately, Davis was injured on a flagrant foul in Wisconsin's loss to Nebraska, but he believes he'll be ready to play in the conference tournament.)

A former five-star recruit, Max Christie came to Michigan State as one of the top-ranked freshmen in the country. At 6-foot-6 and 190 pounds, Christie possesses the ability to shoot and score the ball at a high level. It’s also worth noting that he has some experience playing on the ball as a point guard. And although plays mostly off the ball for Michigan State, it is a good example of his versatility. Christie is a strong candidate to be a one-and-done prospect.

Although he is a bit undersized for the position, the Buckeyes often use E.J. Liddell as a 4/5 in their lineups. He is physical and versatile on both ends of the floor, scoring both inside and out. He appears more comfortable in the mid-range and paint, which works well for his college system, but raises questions in regards to his translatability to the NBA. Liddell continues to fill up the box score and play with great effort and toughness. He has certainly carved out a spot for himself in the 2022 NBA Draft.

Malaki Branham was ranked 35th in the 2021 RSCI recruiting class and, after a slow start, burst onto the scene in conference play. At 6-foot-5, he plays with patience, and is a smooth three-level scorer. He is comfortable operating in the pick-and-roll and mid-range, and has shown promise as a spot-up shooter. Branham is full of potential, and is hitting his stride as a scoring threat. He's certainly one to watch down the stretch.

​​Possessing positional size and length, Bryce McGowens has flashed space creation as a shooter with pull-up craft, ball-handling and the ability to elevate over defenders. Although he can be a bit streaky, the fluidity with his shooting mechanics are special. He is also a solid defender due to his length, athleticism and instinctual play. With his combination of great athleticism, shot-making and finishing craft at the rim, McGowens has been the go-to scorer for the Huskers this season.

Standing 6-foot-11, 210 pounds and possessing an impressive 7-3 wingspan — while also being capable of moving fluidly — Moussa Diabaté’s physical tools jump off of the page. While he is still a work in progress on the offensive end, Diabaté’s talent and versatility on the defensive end stand out. Since Diabaté has been able to properly showcase his talent and make the necessary steps in his development throughout the season, he is a strong candidate to be a one-and-done prospect.

Caleb Houstan, a five-star recruit for head coach Juwan Howard and the Michigan Wolverines, is a high-level outside shooter and a marksman who possesses positional size at 6-foot-8. Houstan's size, mechanics, shot-making are special, but there are questions about his versatility and consistency. He is one to monitor as the season wraps up, and is a viable floor-stretching option in the 2022 NBA Draft.

Trevion Williams may be the best low-post scorer in the country. He has incredible footwork, craftiness at the rim and is always thinking a step ahead with the ball in his hand. He is also an impressive athlete at 255 pounds, as he's quick off the ground and runs the floor well. Williams is old school in the way he provides points, but he does the little things well. He has good vision out of the post, plays with a great motor and is the kind of player you want in the locker room. Williams has a great chance of earning a shot at the NBA level.