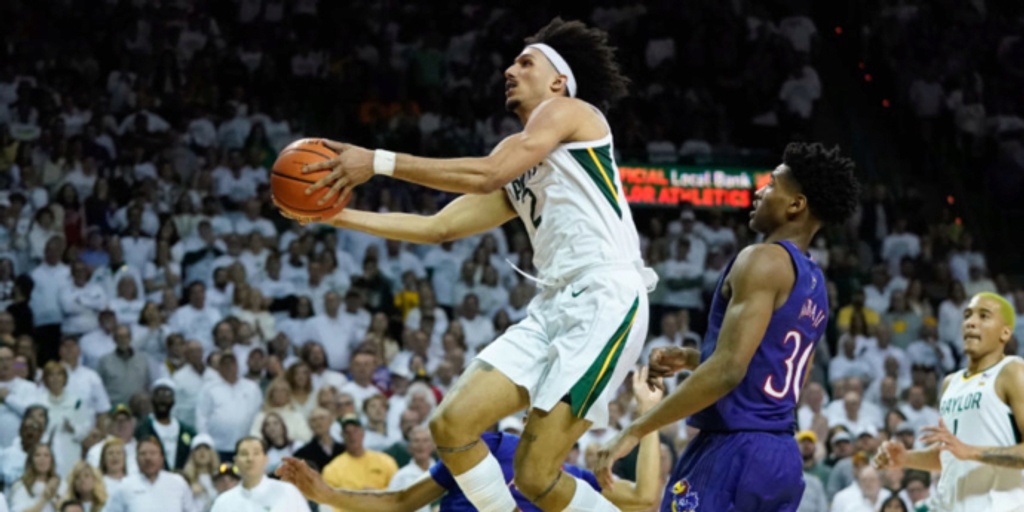 (Editor's note: Check out our breakdowns of the ACC, Big Ten, Pac-12 and SEC.)

Here are the names to look out for in the Big 12.

A big, strong and explosive wing with a high motor, Kendall Brown has provided an impact as a freshman at Baylor this season. Brown can finish with both athleticism and finesse as a slasher despite lacking elite self-creation. He is also a terrific defender, using his length and quickness to disrupt the opposition. Brown is a potential lottery pick in the 2022 NBA Draft.

Ochai Agbaji is a versatile wing who has shown promise as a defender, slasher and shooter. Early in his career, he was known for his athleticism and defense. However, this season, he has emerged as one of the best shooters in America, making giant leaps as a scorer in both volume and efficiency. Agbaji has solidified himself as a viable 3-and-D option at the NBA level, and is a candidate for National Player of the Year.

Jeremy Sochan is an energetic, athletic forward with positional size at 6-foot-9. He has a tremendous motor and excels as a defender and rebounder due to his footwork and length. Although still 18 years old, Sochan has shown flashes of self-creation, but is primarily scoring off of cuts at the rim and catch-and-shoot threes at the moment. He will still only be 19 on Draft Day, but he is already showing why he has big-time potential at the NBA level. Sochan's combination of size, athleticism, instincts and skill is unique.

At 6-foot-6, Christian Braun has positional size, showing the ability to score from anywhere on the floor. He has a smooth release from three and can pick his spots off the dribble. He is reliable on and off the ball on offense, while providing intelligent defense on the other end. Braun is a well-rounded player and makes a strong case for the 2022 NBA Draft.

At 6-foot-9, Matthew Mayer is a fluid ball-handler and scorer who has been an essential piece of Baylor's success the last two seasons. Although his role and usage have never been overly significant, his impact is often felt on both ends of the floor. He projects as a scoring wing at the NBA level who plays strongly on and off-ball defense, providing true versatility. In addition, Mayer has positional size, making him worth monitoring down the stretch as he makes a case for himself in 2022.

Terrence Shannon Jr. is an energetic, athletic wing who hangs his hat on defense. He possesses an impressive frame and mobility, and is a solid on-ball defender who provides versatility. He missed many games due to injury to start this season, and will need to show more consistency as a shooter and rim-finisher. However, Shannon’s physical tools alone make him a viable option in the 2022 NBA Draft.