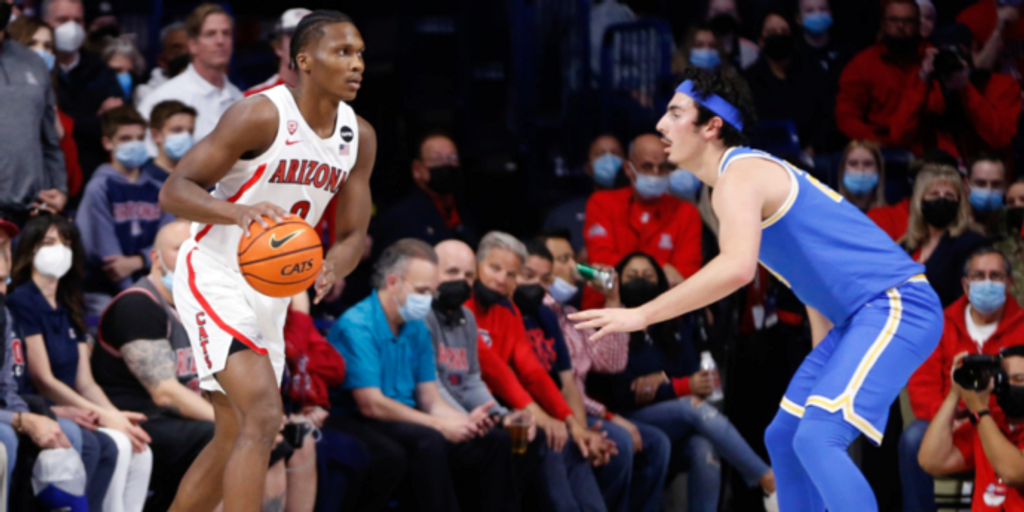 (Editor's note: Check out our breakdowns of the ACC, Big Ten, Big 12 and SEC.)

Here are the names to look out for in the Pac-12.

After a strong freshman campaign for the Arizona Wildcats, Bennedict Mathurin has made a jump in his second year in Tucson. Mathurin's size, athleticism, defense and shot-making ability make him an intriguing NBA prospect. Standing at 6-foot-6 and 210 pounds, he is an explosive athlete and a capable slasher and finisher. Mathurin has solidified himself as one of the best wings in the 2022 NBA Draft, and continues to make his case as a top-10 selection.

At 6-foot-8, Harrison Ingram projects as a versatile point-forward at the next level. He is a capable scorer both inside and out, and is comfortable as a pick-and-roll ball-handler. Ingram is also an intelligent defender with an excellent feel for the game. With positional size, basketball IQ and versatility on both ends, Ingram has made a name for himself, and will continue to make his case as a potential first-round pick this June.

One of the best rim-protectors in the country, Christian Koloko can anchor a defense in the half-court. As much as his 7-foot-4 wingspan helps on defense, it also allows him to be effective on the other end. His hands, post moves and awareness continue to improve, and he is an efficient finisher in the dunker spot. While his role won't ever be to carry a large load on offense, his impact as a rebounder, shot-blocker and rim-runner remains special.

At 6-foot-9, Jabari Walker was a reliable shooter from three-point range last year, although on low volume (23 of 44). While he has been consistent in that area this season, he has also shown promise as a floor stretcher — both on the move and standstill. Walker is also a solid rebounder and adequate defender with a high basketball IQ. If he shoots the way he is capable of and makes the next steps in his development, he could be a highly-coveted prospect in the 2022 NBA Draft. Also worth noting, Jabari is the son of former NBA player Samaki Walker.

After a stellar NCAA Tournament run last season, Johnny Juzang tested the NBA Draft waters, but ultimately returned to UCLA for his junior season. At 6-foot-7, Juzang is an exceptional outside shooter, especially off the dribble in the half-court. He has continued his efficient scoring as a shot-creator and cutter this season. He projects as a wing shooter and capable facilitator at the next level, and will be considered a solid option for teams picking in the 2022 NBA Draft.

Jaime Jaquez Jr. is intelligent and crafty, using defensive manipulation and footwork to create for himself and others. He excels in the post against smaller defenders, and can stretch the floor as a reliable shooter from three-point range. In addition, Jaquez is a hard-nosed competitor, and is an adequate defender and rebounder. He continues to build on the momentum he established last March during UCLA's impressive tournament run, is proving to be a consistent three-level scorer and is a viable option in the 2022 NBA Draft.

An intelligent player, Isaiah Mobley is a strong rebounder at 6-foot-10, and has shown the ability to score the ball effectively — both inside and out — with tremendous touch at the rim. He flashed the ability to stretch the floor last season, and has continued to do so in '21-22. Mobley lacks elite athleticism and will be close to 23 years old on Draft Day, but his promise as a passer and floor-spacer make him an intriguing prospect nonetheless.