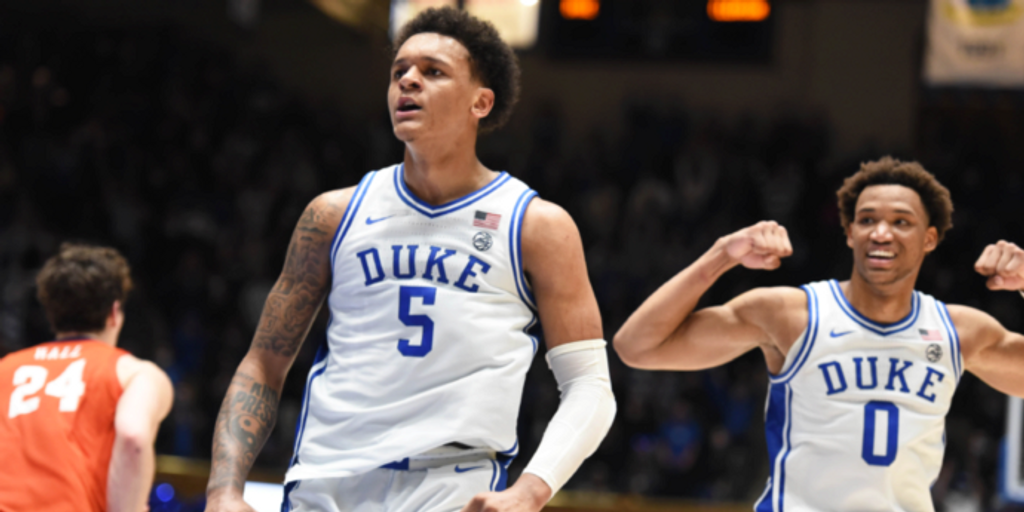 Here are the names to look out for in the Atlantic Coast Conference.

AJ Griffin is 6-foot-6 and possesses a 7-foot wingspan. He is a powerful and versatile wing with a tremendous physical profile and promising skill set. Griffin has also shown the ability to create for both himself and others. After missing the early part of this season due to injury, he has solidified himself as one of the best shooters in the country. AJ is the son of former NBA player and current Toronto Raptors assistant coach Adrian Griffin, and has made his case as a top-10 pick.

Mark Williams is one of the best shot-blockers and inside scorers in the country. Utilizing his size, length and interior presence, Williams shows flashes of dominance on both ends. This season, he has been solid for Mike Krzyzewski and the Duke Blue Devils, which could lead to him to first-round pick status in the 2022 NBA Draft.

Wendell Moore Jr. is having a breakout season, finally coming into his own as a junior. At 6-foot-5, he has good positional size, strength and athleticism at guard. While Moore remains streaky as a three-point shooter, he has proven to be a reliable three-level scorer this year for the Blue Devils. He will still be 20 years old on draft night with more room to develop, making him a solid option this June.

Blake Wesley came to Notre Dame as the No. 100 RSCI high school recruit,, but has quickly cemented himself as one of the more productive freshmen in the country. He has positional size and excellent length with a knack for scoring at all three levels. He'll need to improve his overall efficiency before unlocking his full potential, but he has the tools and skill set to develop into a capable NBA player.

A physical and slashing guard capable of shooting the ball from outside, Trevor Keels came to Duke after being a consensus five-star high school recruit. His physicality and natural ability to score the ball should generate interest from NBA teams. Although he can be streaky as a shooter, he has a beautiful release, and has proven to be a tough shot-maker. With positional size and a knack for scoring, Keels is one to follow.

After two seasons at both Triton College (NJCAA DII) and Oklahoma, Alondes Williams transferred to Wake Forest and truly came into his own. Leading the team in points, rebounds and assists, he is versatile and reliable in all facets of the game. His shooting has been inconsistent, but he makes a strong case for this June's NBA Draft. He is one of the older players in the class, but projects as a player worthy of an opportunity at the next level.

After being a highly-touted recruit out of high school, Caleb Love had a somewhat underwhelming freshman season for the North Carolina Tar Heels. However, this season, he is scoring well from deep and the free-throw line, promising a scoring punch at the next level. Love is a solid athlete with a quick first step and knack for playmaking, and has taken a step forward this season. Love could be a viable option in the 2022 NBA Draft if he can continue trending in the right direction.

After redshirting in 2019 and only playing 17 minutes in 2020, Dereon Seabron has exploded onto the scene as a sophomore. Leading NC State in multiple statistical categories, he excels in attacking and finishing in the lane with his long wingspan. He isn't much of a floor stretcher at this point in his career, but adds significant value in other areas such as rebounding and facilitating. He is older for a sophomore (22.1 on Draft Day) but continues to make a strong case for himself in this June.