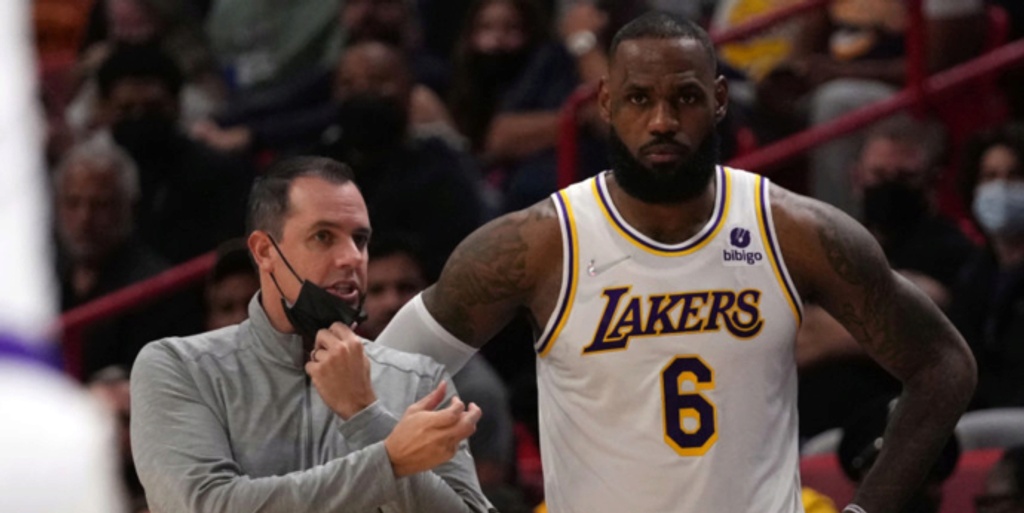 Three of the four California NBA franchises have now resided in the Sour Rankings for multiple consecutive weeks.

This might be the worst check-in to date. The Los Angeles Lakers, with a coach on the brink of getting fired, an avalanche of roster criticism and a storm of rumors, have taken the No. 1 spot in these rankings. Not far behind are the Sacramento Kings, who continue to let an attainable Play-In bid slip away while trade gossip engulfs their own headlines. And the L.A. Clippers, while battling admirably, approach a criticial franchise inflection point with this week's trade deadline.

It is wild on the West Coast, and don't expect things to calm down anytime soon.

Escaping the Sour Rankings: The Houston Rockets managed to sneak out this week after going 1-1 with a nice win over the Utah Jazz and a "good effort" loss to the Golden State Warriors. KJ Martin tallied 14 points, 3 assists and 2 steals in that Friday defeat off the bench. Also, a shoutout to Rio Grande Valley prospect Daishen Nix, who is putting up over 27 points per game for Houston's G League affiliate this month.

Expectations are high in Utah. This is a reigning No. 1 seed that needs to take the leap to legitimate title contender, and as of this recent stretch, the Jazz simply aren't there. Utah is 3-7 in its last 10 games with an 18th-ranked defense over the past two weeks. The Rudy Gobert slander is back, but as Nekias Duncan wrote recently, he's far from the main problem with this defense.

The Jazz are reportedly looking for wing defenders on the trade market, which could sorely help while teams run rampant against Joe Ingles, Bojan Bogdanovic, and even Royce O'Neale.

The Clippers and their injury-plagued roster keep battling, and went a solid 2-2 with close losses to the New York Knicks and Denver Nuggets this week. They've been a bottom-10 team on both ends recently, but are still solidly ninth in the West, so LAC remains in a limbo state ahead of the trade deadline.

If the Clippers are truly willing to discuss most of their veterans in trade talks, teams should be lining up to make offers for Nic Batum. The 33-year-old continues to be one of the league's most underrated complementary players. He's up to a career-high 64.9% True Shooting percentage and has been lights-out from beyond the arc while consistently taking tough defensive matchups.

Anfernee Simons has almost singlehandedly given Portland joy. He's averaging 25.0 points and 7.2 assists per game in the month of January, while the Blazers have quietly gone a respectable 7-4 this month. Portland is now three games up on the Kings for the final Play-In bid in the West, and that should be comfortable breathing room given Sacramento's state right now.

The Blazers have 5 games in 7 days coming up, including matchups against Minnesota, Dallas and Chicago. If they can break .500 in that stretch, they might leave the Sour Rankings entirely.

Of course, the Hawks' best stretch of winning comes when trade rumors are swirling. Atlanta has taken its last four games, beating the Minnesota Timberwolves, Miami Heat and Charlotte Hornets this week. Trae Young is averaging 31.3 points and 9.0 assists per game during the streak while canning 47.6% of his three-pointers, so he's on fire.

Onyeka Okongwu has also blended in seamlessly with the starters while Clint Capela has been out. De'Andre Hunter is on track to the tune of 18.8 points and 6.5 rebounds per game. Is it too early to be back on the Hawks train?

Jayson Tatum's 51-point bombshell on Sunday essentially saved the Celtics from a potential No. 1 ranking this week. He now has the most 50-point games (5) in franchise history, and he is 22 years old (!!!). It's been a brutal year for Tatum, so Celtics fans certainly hope Sunday's performance was a spark.

Jayson Tatum delivered for us tonight with a 51-point performance that fueled a 116-87 win over the Wizards. pic.twitter.com/HcrvPH0UMP

Meanwhile, the same team also went scoreless for seven crucial fourth-quarter minutes and blew a winnable game against Portland. In a 2-2 week, the Celtics move up by default against a struggling middle pack in the East. Perhaps a fully-healthy starting five is what the team has always needed.

So the Knicks have a sneaky 10th-ranked offense and fifth-ranked defense over the past two weeks. I know it doesn't reflect much in the record (1-2 this week) or today's rankings, but I do think good things are slowly happening.

From what I've seen and read, the biggest gripe appears to be that Tom Thibodeau still won't fully unleash his young talent. Immanuel Quickley has started just 2 of his 43 games played. Quentin Grimes has maximized his bench role with quality two-way play. Miles "Deuce" McBride has graduated from the G League. There's a lot of excitement around these backcourt players in particular and the fans are hungry for more.

The Pacers' state of affairs hasn't meaningfully changed for over a calendar month. So this time, I'm giving the floor to Justin Holiday, who has been a bright spot in dim places for Indiana. The eldest Holiday brother is shooting a scorching 42.0% from beyond the arc and averaging 13.4 points per game in January, while being one of the few plus perimeter defenders on the roster. He's another Batum-level role-player who, if I were GM of a contender, I'd heavily pursue before the trade deadline.

Fortunately, the Wizards don't seem all too concerned with Bradley Beal's likely free agency this offseason. Unfortunately, their on-court slide continues after an 0-3 week with losses to the Brooklyn Nets, Toronto Raptors and Celtics. Washington started 10-3 and has since gone 13-21 with the league's 22nd-ranked offensive rating and 26th-ranked defensive rating. The Wizards have two more games this month and some extended time off before the schedule ramps back up in February.

So the Kings are reportedly thinking about acquiring Ben Simmons and Tobias Harris from Philly and... I just don't know if that's how you get out of 15 years' worth of directionless mediocrity. They're both great players, but do they significantly raise the ceiling when the Sixers would get a haul in return?

Sacramento is 2-8 in its last 10, and this quote from the aformentioned report by Sam Amick sums things up nicely:

"The widely held belief is that this front office, with general manager Monte McNair in his second season after working for all those years with Morey in Houston, simply must do a deal of significance now. To no one’s surprise, there has been a collective loss of faith in the prospect of this core evolving into a contender in the West."

The Lakers' woes have been the talk of the NBA for the past week. I don't need to add anything because an article and a video clip will cover everything you need to know. Frank Vogel appears to be coaching for his job every game, and as Alex Kennedy wrote, that's pretty brutal. As for this roster, let JJ Redick explain:

“[The Lakers] are a bad team! … These are guys that are past their prime, that’s the reality.”

I'll ask: What is the best return we can reasonably expect from a package of Kendrick Nunn, Talen Horton-Tucker and a 2027 first-round pick?