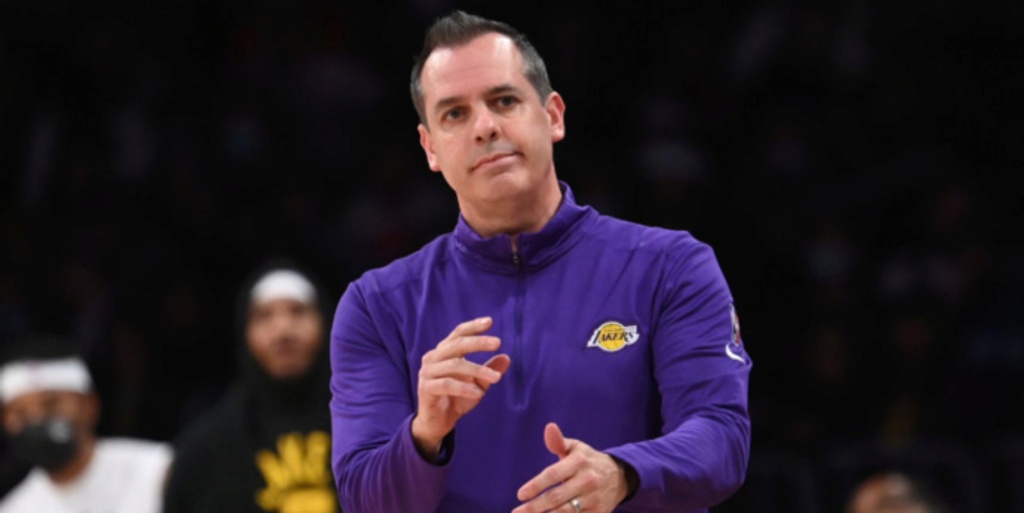 The Lakers have put Frank Vogel in a very difficult position

The Lakers "will not be making a personnel move at this juncture and Frank Vogel will travel with the team tomorrow to coach in Orlando on Friday," sources told Haynes.

Earlier this week, Sam Amick and Bill Oram of The Athletic reported that Vogel is on the hot seat and "being evaluated on a game-to-game basis." According to the report, he "narrowly avoided being fired" after the Lakers' 37-point loss to the Denver Nuggets and he "was coaching for his job" when the team faced the Utah Jazz on Monday. Los Angeles ultimately beat the Jazz, 101-95.

The Lakers have put Vogel in a really difficult spot — undermining him, adding extra pressure and creating a potential distraction. This is no way to treat a head coach who just helped you win a championship in October of 2020. While the Lakers extended Vogel's contract over the offseason, they reportedly only added one year to his deal just so he wouldn't be a lame-duck coach this season.

Not only do these leaks make Vogel's job harder, they could also complicate the Lakers' next coaching search (whenever that may be). Coaches talk and stick together, and members of the NBA's Coaching Association probably aren't thrilled about how the Lakers are going about this. When it comes time to find Vogel's replacement, certain candidates may be concerned about how he was treated.

Vogel has a 116-72 record since taking over as the Lakers' head coach, and he's 420-363 throughout his coaching career. This season, Los Angeles has underwhelmed, sitting at 22-23 (which puts them in the Western Conference's eighth seed). The Lakers have the NBA's 15th-best defense (allowing 107.4 points per 100 possessions) and 22nd-best offense (scoring 106.6 points per 100 possessions).

However, there's plenty of blame to go around in Los Angeles. Some of their veteran players have struggled — most notably Russell Westbrook. And the front office made a number of questionable decisions last offseason, moving on from key pieces and trading for Westbrook's massive contract (rather than acquiring DeMar DeRozan in a sign-and-trade, dealing for Buddy Hield or standing pat).

On Wednesday, Westbrook was benched in the final minutes of the Lakers' loss to Indiana. According to Dave McMenamin of ESPN, this idea had been discussed over the last week-and-a-half, and the front office gave Vogel the green-light to sit the nine-time All-Star. "You got to do what you got to do," management told Vogel. After Westbrook struggled on both ends, Vogel decided to sub in Malik Monk (who has been a bright spot for Los Angeles).

It's not surprising when an NBA head coach is thrown under the bus and used as a scapegoat. When a team fails to live up to expectations, the coach is almost always the first to be replaced. But this instance feels particularly egregious, especially considering Vogel helped the Lakers win their 17th championship not too long ago.

"If the Lakers want to fire Frank Vogel, they should fire Frank Vogel," McDonough tweeted. "NBA head coaches are paid well, with the trade-off being that ‘longevity’ usually isn’t part of the deal. But what the Lakers absolutely should not do is put out there that Vogel is coaching ‘game-to-game' or [leak] that there are ‘no current plans’ to replace him. That’s not fair to Frank, who won a trophy with the Lakers just 15 months ago and is one of the most respected guys in the NBA. Letting him twist in the wind undermines his authority while also damaging the franchise’s reputation."