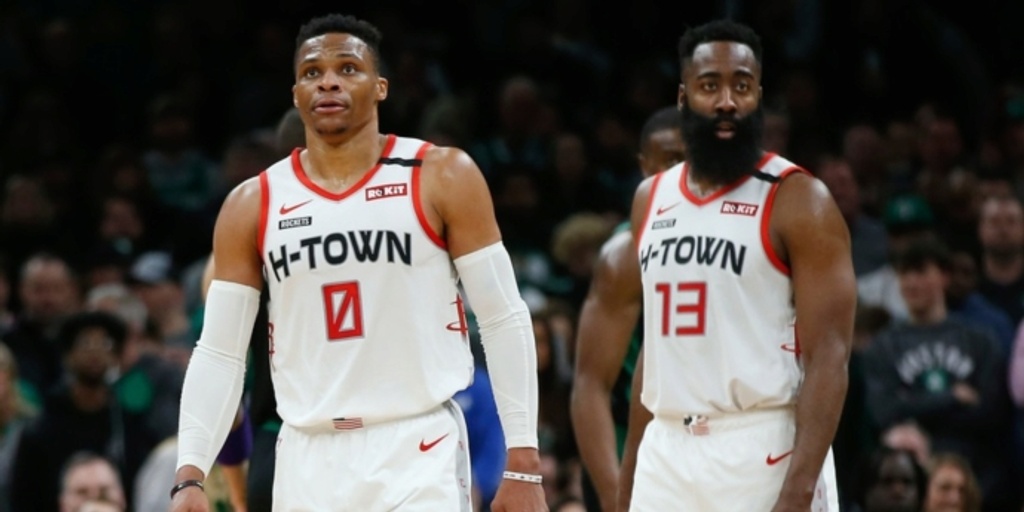 Giannis Antetokounmpo was en route from Athens to Milwaukee this morning, as he's ready get back in the gym and prepare for the upcoming NBA season (after he quarantines, of course). The Bucks have been aggressive, landing two new teammates for Antetokounmpo: Jrue Holiday and Bogdan Bogdanovic.

Russell Westbrook and James Harden want out of Houston, but they have no leverage when it comes to leaving. For all the talk of Harden wanting to get traded to Brooklyn, can his ball-dominant play be a fit alongside Kyrie Irving? Or, since the team is already widely regarded as a co-favorite along with Milwaukee to win the East, is Nets GM Sean Marks better off standing pat with depth at every position?

Who will be making the most noise tonight when the draft is held and Woj breaks out the euphemisms?

Despite reports to the contrary, BasketballNews.com's Alex Kennedy and I are hearing that the Atlanta Hawks are being aggressive and considering a number of win-now moves. League sources say they want to bring in some veterans to surround their young Big Three of Trae Young, John Collins and Clint Capela. They are loaded with cap room -- approximately $51 million -- and thus, can make uneven trades salary-wise. Also, they have the sixth pick in the draft, and they could look to trade the pick if it nets them a key contributor that complements their young nucleus. They still need a veteran to lead the youngsters, and there are a bunch of those out there in this free-agent class. Rajon Rondo seems like a good fit, for example. My colleague, Spencer Davies, ranked all of the top free agents, and the Hawks have the financial means to go out and get any of them. They may be the most active team tonight.

“It’s going to be hectic,” colleague Matt Babcock said in this Q&A with Kennedy.

LaMalo Ball has been dropping in mock drafts recently. ESPN’s Jonathan Givony dropped Ball from No. 1 to No. 3, and our Matt Babcock currently has him going No. 3 to the Charlotte Hornets as well, with USC's Onyeka Okongwu slotted No. 6 to Atlanta. If any of the other 29 teams are madly in love with the 6-foot-9 big man and he is still on the board at No. 6, Hawks general manager Travis Schlenk may be able to start a bidding war and reap a bounty for that pick. Atlanta has the most cap room of any NBA team, and Schlenk is trying to put together a roster that will make the Hawks a playoff team for the first time since Mike Budenholzer was coaching them.

The Los Angeles Lakers have already made one major move, acquiring Dennis Schroder from the Oklahoma City Thunder for Danny Green and their 2020 first-round pick. But they could potentially lose Rondo in free agency, and we now know -- thanks to Etan Thomas’ podcast “The Rematch” -- that Dwight Howard wants a better contract than the one he played under last season. It remains to be seen whether Avery Bradley and JaVale McGee will exercise their player options, and whether Kentavious Caldwell-Pope is retained as a free agent (as Los Angeles has his Bird rights).

As for the Milwaukee Bucks, giving up three first-round picks in the deal with New Orleans for Holiday shows how committed they are to changing the parts surrounding Giannis as they try to entice him to sign a supermax deal. But they now need a backup point guard along with a shooter to replace the departed George Hill, and they risk losing top defender Wes Mathews as an unrestricted free agent. So GM Jon Horst’s work is not yet done.

The San Antonio Spurs and Portland Trail Blazers are also said to be especially active in trying to shake up their rosters. The Blazers have already acquired Robert Covington to be their 3-and-D guy alongside starters Damian Lillard, CJ McCollum, Jusuf Nurkic and Zach Collins, so an upgrade at the 4 position seems to be their most likely next move. Because the Blazers are capped out, this would have to come through a trade or free-agent signing, and they have already dealt away the No. 16 pick. Portland may have to wait to see how the initial stages of free agency shake out, because there are some very good players who are going to get squeezed financially due to the dearth of available cap space (so it's possible that they could land a talented player with their mid-level exception).

Looming large in terms of teams that have enormous flexibility are the New York Knicks, who have the No. 8 pick and have become increasingly secondary in the New York market behind the Brooklyn Nets, which does not sit well with owner James Dolan. The Knicks have some $27 million in cap room, and new general manager Leon Rose has been playing his cards close to the vest throughout the summer and fall. (The Knicks also moved up to No. 23, trading with the Utah Jazz).

And then we have the Toronto Raptors, who not only stand to lose two of their best players, Fred VanVleet and Serge Ibaka, but they also still do not know where they are going to play. Tampa, Fort Lauderdale and Nashville are among the cities being mentioned as possibilities, even as team president Masai Ujiri is telling anyone who will listen that a way must be found to play at Scotiabank Arena.

We have already written about where the games may be played (practice facilities and G-League arenas are being considered), and the NBA announced Wednesday night that only the first half of the schedule will be released around the start of training camp.