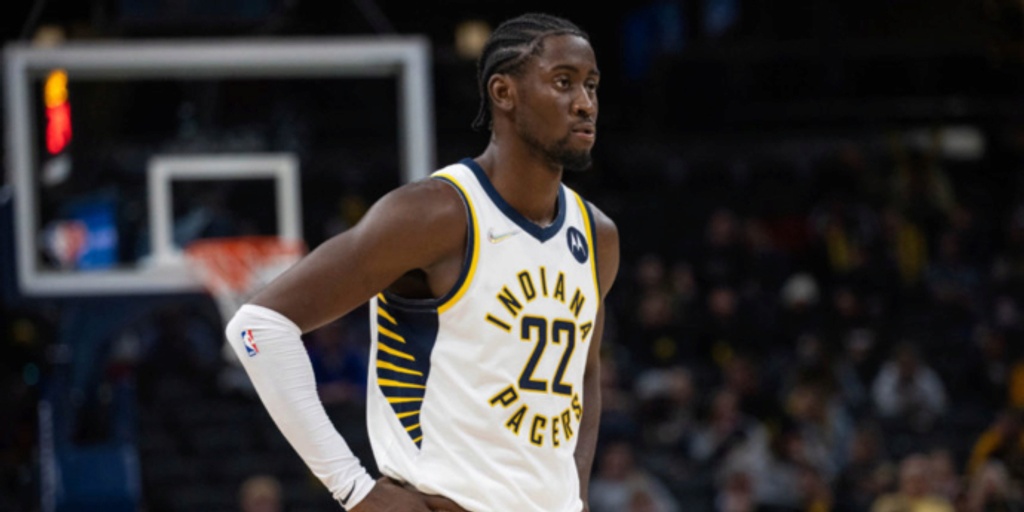 The Athletic’s Shams Charania officially tossed out a stick of dynamite on Tuesday, and the fuse was lit from Indiana. Trade season has officially begun, and the Pacers are open to a fire sale to begin an “extensive rebuild.” A long overdue strategy in Indiana, it’s the right move for a team that has shown a low ceiling and potential roster regression.

With a 10-16 record, Indiana is open to all of its key pieces being shipped out, per Charania, including Caris LeVert, Myles Turner and Domantas Sabonis. Here on BasketballNews.com, we will be providing the best potential landing spots for all three. Nekias Duncan will be handling the two-time All-Star center in Sabonis, while I’ll be scouring through the best situations for LeVert and Turner.

We’re going to kick things off with LeVert. As I wrote last month, No. 13 overall pick Chris Duarte’s quick emergence as a key long-term piece changed the calculus on the future of the team's backcourt. With Malcolm Brogdon signing an extension and not being eligible for a trade until this offseason, that leaves LeVert as the odd man out. He also plays the same position as Duarte, making his exit even more likely before February’s deadline.

When the Pacers acquired LeVert almost exactly one year ago in the blockbuster four-team James Harden trade (which also sent Victor Oladipo to Houston), Indiana believed it might have struck discount gold once again. However, LeVert’s on-court value is nowhere close to what it once was. LeVert has shown to be a solid combo guard, but his overall ineffectiveness in reading the floor and his poor shot selection make paying him a hefty contract a very worrisome proposition.

So, which teams actually make sense for the 27-year-old scorer? Let’s dive into the best win-win scenarios for the Pacers and LeVert.

Although the Cavs are in the same division as Indiana, they immediately popped up as my best-case scenario in a potential LeVert deal. Not only would LeVert be able to slide in at shooting guard in the short-term replacing Collin Sexton — who is sidelined with a torn meniscus — but he also fits Cleveland’s long-term puzzle alongside Darius Garland, No. 3 overall pick Evan Mobley and potential All-Star center Jarrett Allen. LeVert is an ideal score-first complement to the gigantic frontcourt duo that is wreaking havoc to opposing offenses around the rim.

From the Pacers’ point of view, the Cavaliers have a former top-five pick in Isaac Okoro who seems like an ideal roll of the dice and trade sweetener. Okoro is a strong, defense-first wing, but his offense still isn’t developing at the rate Cleveland had hoped. Okoro’s fit with the Cavaliers core right now is clunky, so swapping him out for LeVert is a major win for 2021-22 and beyond.

Cleveland throwing out an offer to Indiana revolving around Okoro, Cedi Osman and a lottery-protected 2022 first-round pick has to at least lead into serious discussions. Osman is salary-filler with a contract only guaranteed through the 2022-23 season, but he’s a solid shooter who can provide wing minutes off the bench.

It’s hard to peg LeVert’s overall value, but a former top-five pick and a first-round pick make up a solid baseline and, honestly, this feels like the most realistic scenario as well. Cleveland is surprisingly in win-now mode, and LeVert adds a much-needed jolt offensively.

On the surface, you may be wondering why the Grizzlies are included here. They have Ja Morant and Dillon Brooks, plus some enticing young prospects developing in their system. However, Memphis continues to remain afloat in the Western Conference play-in race early on without Morant, who is sidelined with a knee injury. Adding LeVert into the Grizzlies’ rotation would soften the blow of not having Morant at the moment, but he also fits very well alongside their young superstar point guard.

LeVert would slide right in as Memphis’ sixth man who can score for himself or create for others in a pinch. I’m very intrigued by the idea of LeVert playing heavy minutes in combination with the likes of Morant, Brooks and Desmond Bane. This would be a move to raise the immediate and long-term ceiling for the Grizzlies, who could also deal Brooks this offseason if LeVert thrives in their system (which is something I actually suggested Memphis look into before the season started).

The Grizzlies’ rotation once Morant returns would look like this:

That’s a strong nine-man rotation that could go up against a lot of teams in the reloaded West.

As you can tell above, two names in the Grizzlies’ current rotation are missing: Kyle Anderson and No. 10 overall pick Ziaire Williams. That would be the return for Indiana, potentially with a lottery-protected first-round pick as well.

Again, it's a solid baseline offer for LeVert and the move could help both teams. Memphis acquires a win-now piece who can also help them long-term, plus Indiana receives a young prospect alongside another future draft pick. Win-win.

This one was tough, but LeVert's fit in Dallas is very intriguing. Could you imagine Luka Doncic playing alongside LeVert in the Mavericks’ backcourt? That would be so much fun, because LeVert is an ideal complementary piece who can take pressure off Doncic in key situations.

With the Mavericks’ roster, though, there are not many assets that would intrigue Indiana. So, unless Dallas was open to this idea, a swap of LeVert for Jalen Brunson at least makes a little bit of sense.

Brunson’s strong start to the 2021-22 season is bringing his value to an all-time high as we inch closer toward restricted free agency. Would Dallas want to ship Brunson for a potentially cheaper option who could play more minutes alongside Doncic? Brunson would be an excellent fit in Indiana as well, forming a strong one-two punch with Duarte long-term.

Would Dallas even be open to the idea of something like Dwight Powell and Brunson for LeVert? It’s a tough sell, but one that could be a potential win-win down the road for both sides. 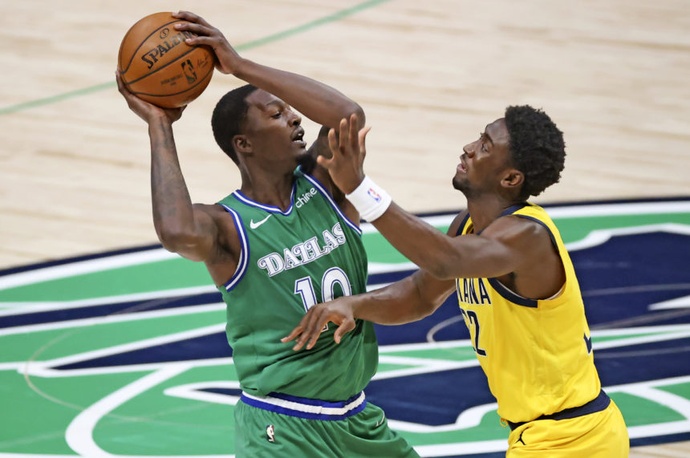 Talk about a potential shift atop the West if Utah were to snag LeVert between now and February. LeVert, I feel, would be a strong fit within head coach Quin Snyder’s system. He'd take pressure off of LeVert and have him focus on the finer details. LeVert’s scoring package would be another win-now, all-in push from Utah, who is trying to capitalize on its Finals window being open.

From Indiana’s perspective, there’s not a lot that Utah could offer that would intrigue them. However, an expiring contract in Joe Ingles (who could be bought out after a trade) alongside second-round pick Jared Butler, Eric Paschall and a lightly-protected 2023 first-round pick could at least make for some interesting discussions.

Ingles has been an integral piece to the Jazz’s success for years, but upgrading to LeVert would be a major win for their title hopes. Utah would have copious amounts of scoring off its bench — LeVert, Jordan Clarkson and Rudy Gay. The Jazz could also trot out LeVert as their starting small forward, inserting him between Donovan Mitchell and Rudy Gobert. Either way, it would be a massive opportunity to bring LeVert aboard.

The Pelicans are teetering on desperation mode. The hot seat has been cranked up on executive vice presiident David Griffin, and Zion Williamson’s injury issues continue to short-circuit their hopeful rise up the West standings. Whether it be Turner or LeVert, expect the Pelicans to be calling Indiana sometime soon if they haven’t already.

Bringing LeVert to the Bayou would lead to an experimental fit alongside Williamson and Brandon Ingram. LeVert would slide right in at shooting guard for the Pelicans, or he could lead their second unit as a dynamic sixth man.

As a potential trade package, what about sending Indiana the following: Josh Hart, Trey Murphy III and a future first-round pick, if necessary? The Pacers would then have two young wings on their roster who could help build out a new vision under head coach Rick Carlisle.

It’s another interesting trade destination for LeVert, and one that actually makes sense for both sides when examined under the microscope.

Overall, LeVert’s market is so hard to project. As a score-first combo guard on an attainable contract for the next two seasons, his market could be robust. However, there’s another scenario where his injury history and inefficiency could seriously limit the market for him.

Indiana is finally blowing it up, and LeVert seems to be an obvious candidate to be moved very soon. Stay tuned to BasketballNews.com as we continue to track the situation, plus reveal more trade destinations for the team's other notable pieces in Sabonis and Turner.