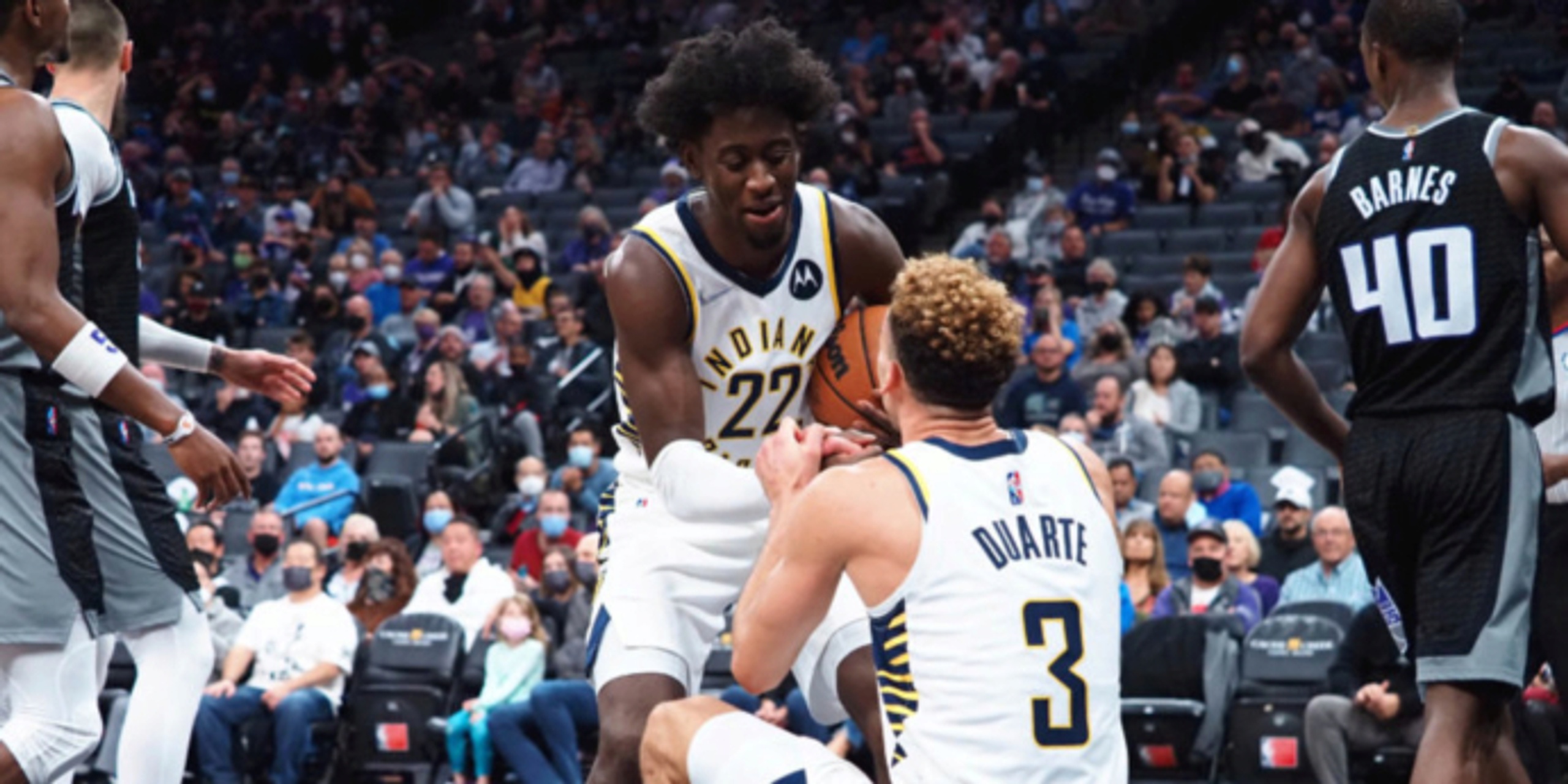 Entering the 2021-22 season, there were many long-term questions facing the Indiana Pacers. Seemingly stuck in the middle for years on end, when would they get off the hamster wheel and make a move one way or the other? Well, early on, we’re already getting answers to some of those intriguing topics in Indianapolis.

Malcolm Brogdon, who was reportedly involved in Ben Simmons trade discussions, signed a new long-term extension worth $45 million, extending his stay in Indy through at least through 2024-25. Now, the Pacers’ leading scorer is off the market for good.

Two-time All-Star Domantas Sabonis has continued to prove why he’s a fixture piece for the Pacers, averaging 19.3 points, 10.9 rebounds and 3.9 assists to this point. Sabonis has also continued to produce instant synergy with last year’s newcomer in Caris LeVert, who the Pacers acquired after shipping off Victor Oladipo in the James Harden four-team blockbuster.

Among Sabonis-only lineup duos who played at least 500 minutes alongside him in 2020-21, only one player carried a positive net rating: LeVert. After LeVert suffered a stress fracture in his lower back, he missed the first six games of the regular season. However, that chemistry with Sabonis has picked up right where it left off for Indiana, as the inside-out duo is carrying a plus-10.3 NET in 109 total minutes (109.4 ORTG, 99.1 DRTG).

So, Indiana has at least three players locked into its long-term plans in a make-or-break campaign with Rick Carlisle now running the show at head coach. And now, surprisingly, a 24-year-old rookie has forced his way into the immediate conversation alongside Brogdon, Sabonis and LeVert.

Chris Duarte, the No. 13 overall pick in the 2021 NBA Draft, has been an instant revelation for the Pacers. Carlisle has placed immense trust in the rookie already, giving him the ultimate green light and drawing up late-game, crunch-time shots for him as well. Duarte is averaging 16.0 points, 4.5 rebounds and 2.4 assists while shooting a blistering-hot 42.2% on three-point attempts. In total, Duarte’s efficiency levels stand at a respectable 55.5% True Shooting percentage in his first 11 games on the NBA level.

Duarte has already made Pacers fans think back to the days of Danny Granger and Paul George — two young wings who made instant impacts in the Association and became key long-term fixtures in the organization. It’s a super-small sample size, but Duarte seems to be the team's first top draft pick in a while to hit since Myles Turner in 2015.

Honestly, the Granger comparisons have some legs to them. Coming out of New Mexico as an older prospect, Granger hit the ground running in Indiana having no real adjustment period for the Pacers. The same exact learning curve is happening for Duarte, last year's Pac-12 Player of the Year at Oregon.

Already, Duarte has forced Carlisle’s hand to keep him on the floor, even with LeVert back from an injury. Instead of splitting the two, Carlisle is letting the talented wing duo log heavy minutes together, and it is producing fantastic results. When Duarte and LeVert share the floor, Indiana is outscoring opponents by 30.2 (!!) points per 100 possessions. That number will surely slide down as the season continues on, but the early results have been nothing short of phenomenal. This also shows Carlisle and the Pacers’ front office that the two can thrive with one another in a pair, taking pressure off each other as a slashing/spot-up combination with Sabonis using his Nikola Jokic-like tendencies inside.

Indiana seems to have struck a gold mine with the Duarte selection, even further evidenced by the fact that the Golden State Warriors and New York Knicks tried to trade for him after he was selected. On the court, Duarte is cold-blooded and doesn’t fear any situation. He even took Giannis Antetokounmpo 1-on-1 and made a jumper in a must-score scenario. Duarte has forced himself into the Rookie of the Year discussion, which has Indiana grinning from ear-to-ear at the moment.

With Duarte currently breaking into a different tier of Indiana’s roster, it’s going to create a unique situation in a few months before February’s trade deadline. If the Pacers are in the playoff race, don’t be surprised if they keep the core together and reassess this upcoming offseason. However, if they are fading away already, how should they maneuver the deadline?

T.J. Warren, who hasn’t played yet this season due to further complications from his foot injury, is expected to make his debut around Christmas or early January. Warren is slated to be one of the top available free agents in a light 2022 market, but his injury history could make teams with the necessary cap space seriously second-guess about offering him a hefty new contract. So, if Warren does well upon his return, he could lock in a new long-term deal with Indiana where it benefits both the team and the player’s financial security multiple years down the road.

This leads us back to the elephant in the room, one that has been there for years now: Turner and his fit alongside Sabonis.

Thus far, the results have actually been positive for this jumbo big-man duo in Indy. The Sabonis-Turner 2-man lineup combination is outscoring opponents by 6.2 points per 100 possessions (103.7 ORTG, 97.5 DRTG) right now, so if that figure maintains, it will certainly be intriguing. Carlisle is still experimenting how to best utilize Sabonis and Turner together, which more often than not leads to each one patrolling his own unit. We’ve yet to really see Indiana commit to closing a game with both Sabonis and Turner on the floor. That isn’t a financially sustainable plan with a player making close to $20 million in either scenario sitting out in crunch-time.

Thought this was really smart geometry last night. The Knicks were consistently involving extra defenders on the roll to crowd Sabonis, so took advantage of the gravity by positioning Turner's hot hand in the strong-side corner.

Big difference from what occurred against Toronto pic.twitter.com/3DILKyHv17

However, it should be noted that Turner is putting together a career-best start in Year 7 with the Pacers: 14.5 points, 8.5 rebounds and 2.9 blocks per game while shooting 41.1% on threes. No surprise here, but when Turner isn’t on the floor, Indiana’s defense completely submarines. The team carries a 100.5 DTRG with Turner in 308 minutes, but it balloons to 115.9 points allowed per 100 possessions in the 230 minutes he sits. Overall, the Pacers are 14.3 points per 100 possessions better when Turner is on the floor. That’s a noticeable swing, and one where it makes their long-term decisions revolving around their core even murkier.

Another way of looking at is that Turner’s trade value may never be higher with his current start to the season. If it maintains for another few months, the trade deadline might be the best time to cash-in on a considerable return. Turner has been on the trade block for years, but nobody has wanted to bite on Indiana’s asking price. Now, with Turner playing the way he is, it might finally be time to push that button.

A team like the Charlotte Hornets — an elite rim-protector away from making the jump — could be a team who would pay a fortune for Turner to be its swing piece to contention; that would allow Indiana to embrace its locked-in core of Brogdon, Duarte, LeVert, Warren and Sabonis. Would the Pacers bite on a trade package revolving around a protected 2022 first-round pick via the New Orleans Pelicans, plus promising young big man prospect PJ Washington? We’ll cross that bridge when we get there, but these long-term hypotheticals should be buzzing within the mind of Pacers president of basketball operations Kevin Pritchard.

In February, or at the end of this season, will Indiana commit further to the Turner-Sabonis frontcourt? What if Warren comes back and thrives as a small-ball 4 in lineups alongside LeVert and Duarte? There’s still plenty of time for these questions to get answered, but that’s why Indiana continues to stand out to me as one of the league’s most intriguing teams — short- and long-term.

Duarte may have forced the Pacers into considering making a bigger move earlier than expected. And for a team in desperate need of hitting on draft picks, completely dearth of homegrown players, that’s totally okay.