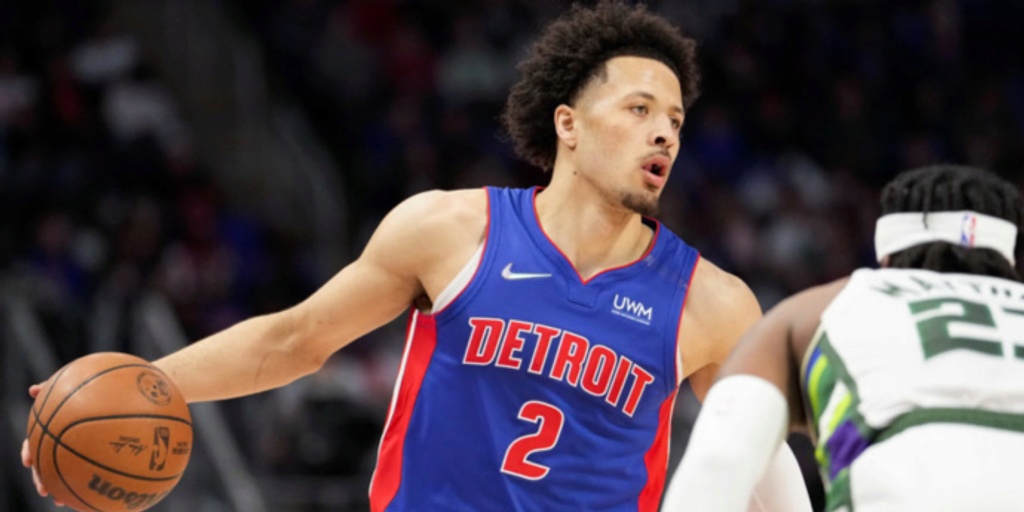 For a third of the NBA, summer break comes early.

Though 10 teams didn't make the playoffs, it's not all doom and gloom. Several NBA bottom-feeders took tangible steps forward in their rebuilding efforts, while others — well, they're not supposed to be here.

Every franchise enters the offseason with summer plans. As teams get eliminated from the postseason, I'll be rounding up every team's offseason outlook and posing one question they must answer over the summer. You'll see each squad's 2022 NBA Draft chest, plus their potential free agents, along with the central question.

Central question: How do the Pistons build an offense around Cade Cunningham?

This was a pretty solid season for Detroit as far as rebuilding efforts go. Cade Cunningham emerged as a Rookie of the Year front-runner and two-way centerpiece who has fans ecstatic about his ceiling. The Pistons finished a solid 10-14 after the All-Star break, and have shown flashes of an improving defense. They did still finish with the 28th-ranked offense, per Cleaning the Glass, and one of the worst shooting rates in the NBA.

Cunningham had to carry a ridiculous offensive load in the latter stages of the season. Detroit has the power to change that in 2022-23, starting with its high draft pick. Maybe Jabari Smith's lights-out scoring means he's an ideal secondary option? Perhaps Paolo Banchero thrives as an additional creator, or maybe Chet Holmgren makes sense as a finisher and spot-up threat? The fun part about Cunningham is that his versatility creates so many pathways for the Pistons in the draft — whether or not the ping pong balls fall their way.

Detroit wields a cap hold of approximately $28 million on Bagley, and once that lifts (either via a new contract or letting him walk), the Pistons should have a solid chunk of cap space to add to the supporting cast.

Central question: How patient is the front office willing to be?

Houston's 2021 draft strategy of "draft talent, figure out the fit later" appears to be working out. Jalen Green demonstrated an Anthony Edwards-esque leap post-All-Star break, Alperen Sengun is already one of the NBA's best passing bigs, and guys like Josh Christopher and KJ Martin routinely hinted at upside. Houston gets another prime shot at a franchise cornerstone this draft cycle. We're approaching Stage 2 of the strategy, though: figuring out how the pieces fit.

The Rockets were one of two NBA teams with bottom-five ratings on offense and defense. They led the league in rim frequency and were fourth in three-point frequency, but posted mediocre shooting clips. Houston evokes memories of the rebuilding Nets, who played a similarly extreme brand of ball for a few years as the team slowly reshaped into a fun playoff squad. Does the front office have the foresight to let head coach Stephen Silas work things out with his roster of young guns?

How is there a “rebuild” to afraid of if it isn’t a rebuild? pic.twitter.com/0pDD7E6Mss

Central question: How extreme is the incoming rebuild, and what veterans mesh with the future vision?

Notably unlisted among the potential free agents are Malcolm Brogdon, Myles Turner, Buddy Hield and T.J. McConnell. All range from solid starters to rotational complements, and 3 of the 4 (not Turner) will be 30 next season. The Pacers are clearly retooling, as evidenced by their trade-deadline fireworks and Tyrese Haliburton's subsequent high usage. They also have publicly flip-flopped regarding the direction of the team; see the above Tweet.

Indiana doesn't have the pure depth of talent to straddle the line. The Pacers can trade many of these talented players and build up a chest of draft picks and young pieces, or they can charge ahead, turn their picks into win-now players and hope Haliburton is ready for the playoff push. But a middle ground doesn't exist in an Eastern Conference where just about every team has solidified its direction.

Central question: What does team-building around two injury-prone superstars look like?

LeBron James turns 38 next season, and has played 60-plus games just once in the past four seasons. Anthony Davis has now missed more than half the season in back-to-back years. Sure, the Lakers were a mess regardless of their stars' health, but going forward, is pursuing fits next to James and Davis even worthwhile if the two won't consistently be on the court?

With just three players under contract (the aforementioned stars, plus Talen Horton-Tucker), the Lakers enter another offseason of a roster overhaul. This time, I'd recommend almost entirely forgetting about James and Davis when building the squad and simply try to assemble units that make sense together.

Draft assets: First-round pick (2.5% chance at No. 1, could change based on Play-In results), Second-round pick via Boston and Charlotte (if 56-60)

Central question: What's going to happen with the veterans?

The top six moneymakers for the Knicks next season are all 27 or older, and I think many fans would say that out of the group, only Julius Randle should have started — and he seriously regressed this season. The young Knicks clearly showed they're ready to take the mantle.

So what happens with Randle, Evan Fournier, Derrick Rose, Alec Burks, Nerlens Noel and Kemba Walker? Is Tom Thibodeau prepared to reduce their (their meaning Burks specifically in this case) minutes and usage, will trades be coming, or will Madison Square Garden burn when Immanuel Quickley opens the season by playing 16 minutes off the bench? New York has drafted extremely well in recent seasons, but the ceiling of the young core is capped if these youngsters don't get a chance to prove themselves in meaningful situations.

Central question: What is the pathway in the frontcourt?

I've stanned Sam Presti's team-building strategy for years now, and I still think it's on track for a serious payoff. Josh Giddey slots in somewhere on your All-Rookie ballot, and draft classmates Tre Mann, Jeremiah Robinson-Earl and Aaron Wiggins flashed rotation-caliber play as well. It is simply a joy to watch a random young player have a breakout game on any given night, and OKC has already shown the early stages of a prominent defense.

Next up: Capitalize on a draft loaded with intruiging frontcourt players. Banchero, Holmgren and Smith are obviously the best of the best. But even if the Thunder slide in the lottery, they could pounce on an athletic shot-blocker like Jalen Duren, or use one of their later picks on a center like Mark Williams. I'm just spit-balling, but the point is that OKC has plenty of chances to find its big-man anchor and further flesh out its core.

Central question: How do the offensive pieces fit together?

Orlando quietly logged a 17th-ranked defense this season, and an 11th-ranked unit since Feb. 1. A dismal offense ultimately doomed the Magic, who were riddled with inconsistent shotmaking and poor team efficiency marks throughout the half-court. We don't need to sound any player alarms; it takes time for young guards in particular to grasp the responsibilities of running NBA offenses.

But what if I told you Orlando has wielded bottom-10 offensive ratings every season for the last decade?

Change can start in the draft, again with some of the top offensive forward options like Banchero or Smith. Adding another ball-dominant guard in Jaden Ivey might be overkill, but AJ Griffin and Bennedict Mathurin feel like good wing fits at first glance. Spotrac estimates the Magic could have up to $30 million in practical cap space, leaving plenty of room for veteran players to accentuate the young talent.

THE D IN DREW STANDS FOR DUNK
DO NOT GOOGLE THIS pic.twitter.com/2AojdAskYV

Some really great development happened for the Blazers during the "wash" portion of the season in the form of players like Trendon Watford, Keon Johnson and Drew Eubanks. Add them to Anfernee Simons, Nassir Little and the incomng draft picks, and Portland suddenly has... kind of a sneaky-deep prospect pool? There's real potential to mold this group into a rotation cast that gives Portland one of its deepest rosters in years.

That's why these Jerami Grant trade rumors concern me. Giving up a possible lottery pick to try and piece together a short-term playoff team risks too much and keeps the Trail Blazers in the limbo they have lounged in for several years. Understandably, the franchise wants to build a contender while Damian Lillard is invested and in his prime. With some patience, Portland can without sacrificing sustainibility.

Central question: How does Sacramento turn into a competitive NBA defense?

The Kings have trotted out lackluster defenses for as long as I can remember. In fact, they haven't ranked above 20th in Defensive Rating since 2005-06 — notably, the last time they made the playoffs.

And that didn't change under interim head coach Alvin Gentry. (Gentry will not return as head coach next season, but is in talks for a front-office role, per ESPN.) However, the on-paper roster actually shines some hope. Davion Mitchell made highlight reels out of his "Off-Night" defense. Justin Holiday is a solid individual defender, as is Harrison Barnes, and even De'Aaron Fox has his sporadic moments.

Can Sacramento find a head coach who turns a group of intriguing players with defensive potential into even an average squad? What draft and free agency options exist? Of course, the Kings would like to end their NBA-leading playoff drought. That'll come with changing the culture on defense.

Central question: What style of guard play is a feasible best fit?

Okay, so obviously the biggest question mark surrounds Bradley Beal's free agency. But from a conceptual standpoint, Washington has tried and failed over the past few seasons to find Beal's best-fitting partner in crime. John Wall, Russell Westbrook and Spencer Dinwiddie were each supposed to provide the downhill juice Beal lacks. The Wizards either did this at serious expense of another skill area (Wall, Westbrook), or it just didn't translate their at-rim ability (Dinwiddie). All battled injuries as well.

I mean, Beal's needs make total sense. The problem is that every other basketball team on Earth also wants this type of guard.