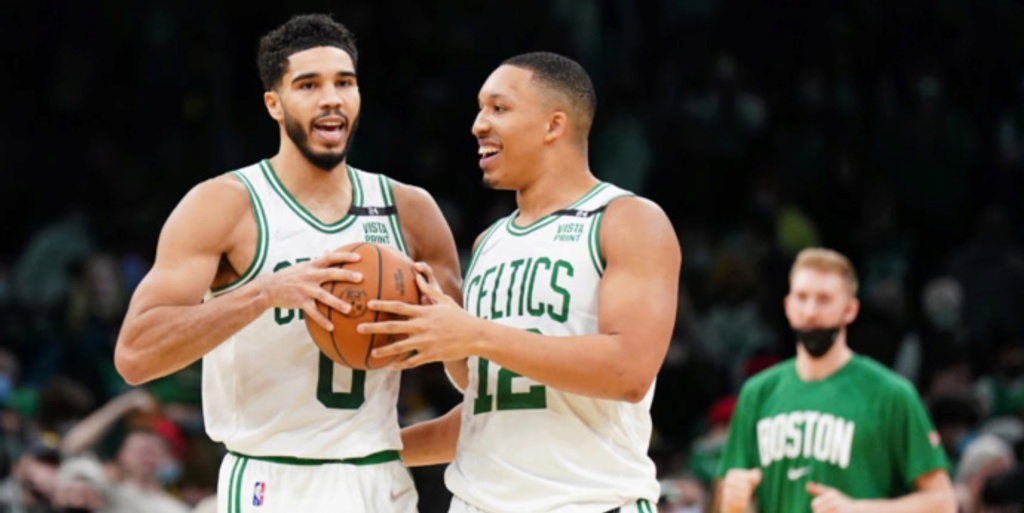 Most Improved Player awards don't go to guys like Grant Williams. They're typically reserved for players making the leap to stardom, and Williams is still a bench player in a healthy Boston Celtics rotation.

So when I say that Williams is one of the NBA's most improved players, don't think of it in the same context. Williams has completely transformed his NBA impact this season on a Celtics squad that desperately needed some in-house transformation. His fit on the roster, and in the larger-league sphere, has gone from a question mark to a grinning smiley emoji.

A year ago, no one knew who Williams could be as an offensive piece. I even thought Juan Hernangomez would replace him in the rotation. Now, he's everything the Celtics need him to be, and might have even taken himself out of run-of-the-mill trade talks.

According to Cleaning the Glass, Williams averaged 109.5 points per 100 shot attempts in 2020-21, a dismal number in the 22nd percentile for his position. This year, he's at 133.4, in the 88th percentile among all bigs. That's nuts, especially for a big with less of a paint presence, and worth exploring.

Obviously, we have to start with Williams' 44.6% three-point clip, which is currently second in the league behind PJ Tucker. He's maximizing on the gravity of guys like Jayson Tatum and Jaylen Brown; 44.9% of Williams' field goal attempts are "wide open" threes (when a defender is at least six feet away), and he's hitting 48.8% of those looks. The 23-year-old has canned over half of his corner threes and also cranked up his above-the-break success from 33% (42nd percentile) to 39% (82nd percentile).

Williams is making quicker decisions to shoot. Over 85% of his field goal attempts come without holding the ball for more than two seconds, up from 72.6% last season. That seems partially due to confidence and more of a defined role as a corner spacer. He's averaging 1.51 seconds per touch when he gets the ball, which is the second-fewest in the main Celtics rotation behind only Robert Williams III.

To top things off, Williams' 89.8% free-throw clip represents an enormous 31% boost from last season. The shooting improvement appears to be here to stay.

But Williams' isn't just evolving as a shooter. I've been floored by his improved poise when he attacks closeouts. Look at this progression, courtesy of Second Spectrum/NBA Stats (note: mobile readers should scroll right).

Williams has hit the sweet spot. He's finishing tough on drives and is an equal threat to throw a quality pass out of an attack. Williams has made 75.0% of his overall at-rim attempts, per Cleaning the Glass, which is in the 84th percentile among bigs. His overall turnover rate is down from a ghastly 17.6% to a league-average 12.7%. Here are some of his high-level drive-and-assists, just for fun:

This newfound offensive arsenal almost distracts from why Williams is in the rotation in the first place: his defense. According to BBall Index, Williams ranks in the 99th percentile for "positional versaility" and the 92nd percentile for "role versatility." Those metrics estimate how evenly Williams guards various positions and player types on the court. He's a key cog in coach Ime Udoka's switch-heavy scheme, and it reflects in these numbers.

Boston has searched for this type of versatile, low-usage stretch forward for years dating back to the Jae Crowder days. The Celtics drafted Semi Ojeleye and added Marcus Morris, but neither of those moves worked out. Ex-president of basketball operations Danny Ainge publicly said he was looking to add "shooting with size" at the 2021 trade deadline.

If you buy the sample size of this season, Grant Williams appears to have fit the bill.