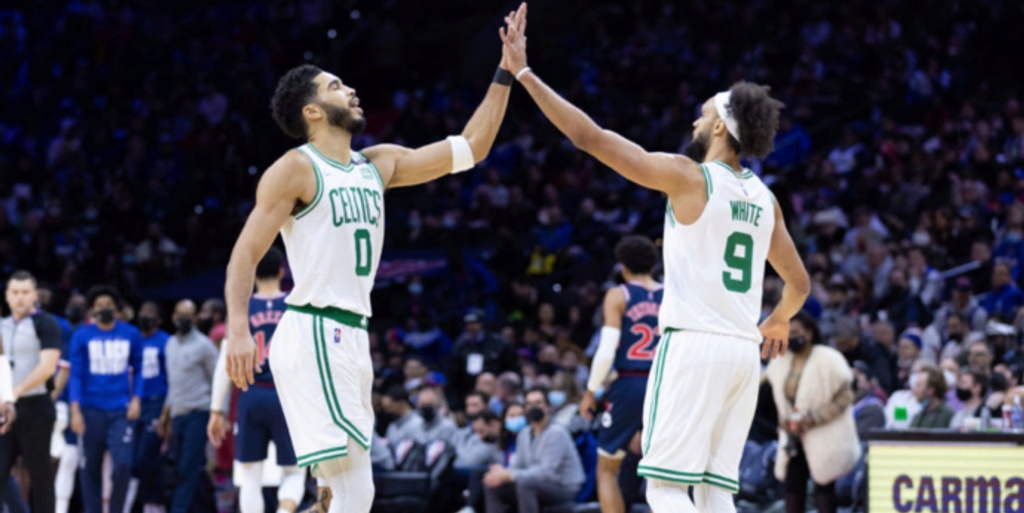 The Celtics are humming, and East contenders should keep tabs on them

We've seen many claims for the East's best team this season.

The Bucks are last year's champions, and have won over 80% of their games when their Big Three (Giannis Antetokounmpo, Jrue Holiday and Khris Middleton) is available this year.

The Nets, Bulls and Heat have all had runs as the East's top seed despite myriad injuries — and in the case of the Nets, vaccine — absences. Even now, Miami and Chicago have the same record (37-21), with the Heat holding the head-to-head tiebreaker.

We can't forget the Cavaliers, an upstart bunch that had the East's best net rating through December 31. The Sixers have the best win percentage (72%) in the East since Christmas; related, Joel Embiid is averaging a league-leading 33.1 points (63.1 True Shooting percentage), 11.4 rebounds and 4.7 assists during that stretch.

For those counting, that's six teams that have or had "we're-playing-better-than-anyone-in-the-conference" arguments this season. Since the turn of the calendar, the Boston Celtics have submitted a strong case to be the seventh.

The Celtics have a conference-best 17-6 record in 2022. Their plus-13.2 net rating doesn't just top the conference — it's nearly three points better than the Phoenix Suns for the league's top mark.

Their defense, both overall (100.4 defensive rating) and filtered for half-court situations (85.9), is roughly four points better than anyone else's this year. The offense, once maligned for its lack of movement and underwhelming shot profile, is hovering around the top 10 in 2022.

There are caveats to throw out if you want to discount some of their statistical dominance. Chief among them are the key absences some of their opponents have faced. And trust me, the irony of dropping this piece after they mollywhopped the Sixers by 48 without their new addition, James Harden, isn't lost on me.

To that I counter:

This is why the East should be on notice.

THE JAYS ARE ROLLING

Kinda has to start here, right?

A large part of the offensive clunkiness has boiled down to these two. Jayson Tatum went the first couple months of the season missing more jumpers than an abandoned trampoline park. Jaylen Brown staked his claim as the best Celtic early on, but tunnel vision still happened to hit him at inopportune times.

It was an odd problem; both players were good enough to be the focal point of defensive game plans, and both struggled to lift the guys around them — including each other. The flashbulb moment came when Marcus Smart (more on him later) essentially called them out for not being willing ball-movers.

He did express optimism toward the end, capping his thoughts with this:

"That's something that they're going to learn," Smart said. "They're still learning. We're proud of the progress they're making, but they're going to have to make another step and find ways to not only create for themselves but create for others on this team to open up the court for them later down in the game. It's something we've been asking them to do, and they're learning. We just gotta continue to help those guys do that to help our team."

But the message was clear: we're not going to hit our level unless we can work together.

To that point, there's been a commitment to unselfishness by The Jays and a better environment being fostered by those around them. As my co-host Steve Jones Jr. has pointed out on The Dunker Spot, the Celtics are doing a better job of leveraging their talents together to grease the wheels of the offense.

Smart sets a ram screen for Al Horford, who then ghosts a screen for Tatum. With Julius Randle in a drop, that's a shot (or a pump-and-drive) for Horford if he wants it. Instead, the Celtics flow into an empty corner handoff with Brown to put further strain on the defense. RJ Barrett provides help at the nail, so Brown kicks it to Tatum. With Barrett off-balance on the recovery, Tatum is able to drive by and get a layup.

Another fave of mine: a Double Drag look with Brown or Tatum as the popper. Depending on the coverage, it either allows them to dictate a switch, or open up something with the roll man (Robert Williams III, Horford) since helping off of Tatum or Brown is typically a bad idea.

Individually, we've seen passing growth from the Jays. Tatum is starting to thread the needle between being patient and decisive. He's slowing up enough to engage the big more in pick-and-roll, but firing darts outside if extra help appears. He's leading the Celtics in three-point assists (54) by a wide margin in 2022.

For Brown, he's leveraging his scoring gravity to create open looks. He's more comfortable making interior reads right now — 51 two-point assists (34 at the rim), 35 three-point assists in 2022 — but that's okay. That his comfort and willingness (5.5 potential assists through Dec.31, 7.2 in 2022) are growing is all that matters.

It would be one thing if Smart simply called for more ball movement earlier in the year. The (valid) criticism has aged well because he's taken more of that responsibility into his own hands.

He's done it in the traditional sense, using ball screens early in the clock to get downhill and get the defense scrambling. Smart has long been an underrated passer, so shifting him from off-ball spacer to tip of the spear has been productive.

The Celtics are generating nearly 1.03 points per possession on trips that feature a Smart-led pick-and-roll in 2022 — a mark sandwiched between Devin Booker (1.03) and Darius Garland (1.01 PPP), per Second Spectrum.

What's fun is the inverse; that number rises to 1.23 (!!!) on possessions featuring Smart as a screener. That is the best mark in the NBA among 164 players that have set at least 75 picks this year. He's a rugged dude that can spring The Jays free or help them get mismatches, but he's also a good enough playmaker to make things click as a short-roll threat.

Employing a similarly versatile skill set is newcomer Derrick White. The longtime Spur has fit in nicely so far, averaging 13-4-3 through three games as an overqualified sub.

He can kick off possessions with ball screens and create for himself or others. Off the ball, he can find cracks to attack as a cutter. He doesn't mind being used as a (ghost) screener.

Robert Williams III has been a godsend for this Celtics group. He's their best athlete, making him a tremendous roll threat or offensive glass cleaner when he's locked in. Beyond that, Williams operates as a connector in Boston's half-court attack.

He isn't just a hand-it-off-to-the-top-dawg placeholder; the Celtics legitimately use him as a hub in Delay or Elbow sets. He's one of the league's best passers from the center position, opening the door for half-court randomness when necessary. And friends, the short-roll playmaking is coming along.

Similar things can be said about Al Horford, sporting north of a 3:1 assist-to-turnover ratio since the year began. He toggles between roles: an elbow hub out of HORNS on one possession, a pick-and-popper on the next, then a pure spacer in the corner while his teammates get busy.

His on-ball usage has decreased as of late; after averaging nearly 12 more frontcourt touches per game than Williams through December 31 (34.2 to 22.4), Williams has usurped him in 2022 (26.1 to 25.8). But the beauty of Horford is that he can scale up when necessary.

Alas, there's the defense — the lone constant of this group as they tried to find themselves.

To restate things from earlier, they have the best defense (100.4 defensive rating) by a wide margin in 2022. During this nine-game winning streak, that number has dropped to 95.5. If you want to go old school, they've held their opponents under 100 points in seven of their last nine games.

Scheme-wise, this is a switchy unit. They switch 26.9 picks per 100 possessions, the second-highest rate in the league behind the Miami Heat (27.2), per Second Spectrum. And on possessions featuring a Celtics switch in 2022, opponents are scoring just 79 points per 100 poss- SEVENTY-NINE POINTS PER 100 POSSESSIONS.

Between the Smart/Brown/Tatum triumvirate, the Celtics have three players who can defend up and down the positional scale. Horford has been surprisingly steady in space, and Williams has some fun tape in that regard. The other Williams, Grant, has been defending at a high level for most of the season too. Adding White to this group gives the Celtics a terrifying top-seven.

It's a unique blend of athleticism, length, strength and IQ. To the latter point, one of the joys of this team is watching them navigate mismatches. If, by some chance, you get them in a matchup they don't like, they're able to scram-switch their way out of it, or shrink the floor and dare you to beat them with skip passes.

Got the Payton Pritchard-on-Tobias Harris switch? No problem. You aren't getting a clean look.

That's a pretty aggressive pinch on Harris, which highlights another strong suit of the Celtics: they absolutely strangle your half-court attack if you have a non-shooter on the perimeter.

Tatum is fine with helping at the nail because he doesn't fear Shake Milton from deep. White is tasked with "splitting the difference" between Milton and Matisse Thybulle, but sinks to pick up Paul Reed once Daniel Theis leaves to contest the shot because Thybulle doesn't scare anyone either.

Both Tatum and Smart thrive as off-ball roamers if they're "defending" a non-shooter. As The Ringer's Kevin O'Connor pointed out in a recent piece, they've experimented with Williams III doing the same thing.

There are things to keep an eye on with this Celtics team. The ball and body movement has improved, but you won't confuse their half-court attack with the Suns'. Things can still bog down for them in fourth quarters.

Zooming out, the Celtics aren't stocked with great shooters. If all else fails, opponents can still attempt to muck things up for the Jays and dare The Others — Smart, White, WIlliams, Horford — to beat them from deep.

But for now, this a team that's humming — figuring things out offensively and restricting airspace defensively. Ultimately, they're a team other East contenders should start keeping tabs on.