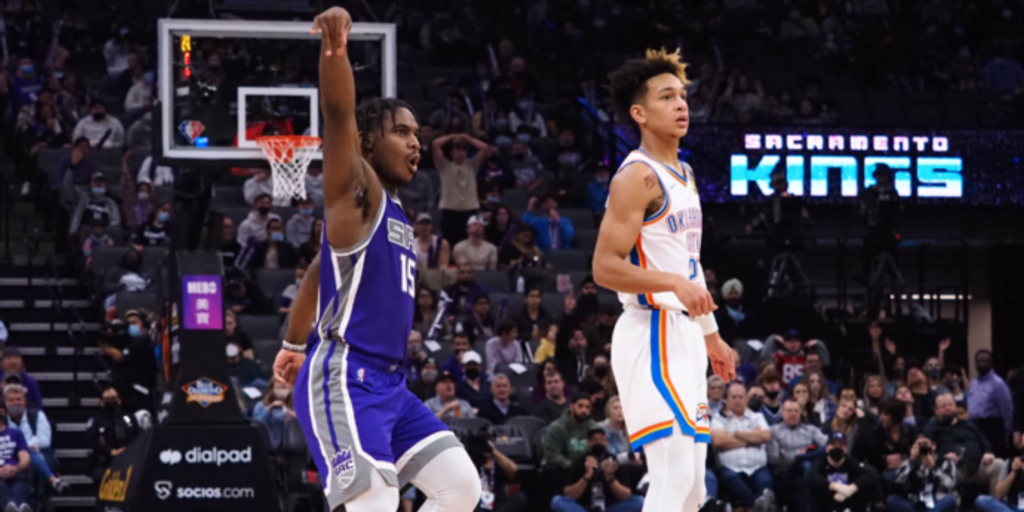 Digging into the offensive strides of Davion Mitchell with the Kings

It takes but a moment to feel Davion Mitchell's presence pop on screen anytime the Sacramento Kings play.

One of my top-five running bits this season has been opposing ball-handlers experiencing his ball pressure and intensity on defense for the first time. When Mitchell stifles a first step, it's akin to someone catching a jab to the chin for the first time. They've sparred, they've been around some heat in the ring, but Davion has that kind of defensive charisma that makes opposition stiffen, flash the Gary Payton eyebrow raise and recognize he's for real.

The defense has been etched in stone since his first minutes at NBA Summer League. However, Mitchell's offense has run counter much of the year. Through his first 43 games of the season, he played roughly 25 minutes per game, averaging 9.1 points and 3.2 assists on 45.5% True Shooting (10.5% below league average). His three-ball was way off, particularly off the catch, shooting better off the dribble per Second Spectrum.

Fast forward to Jan. 26 in a game against the Atlanta Hawks. With De'Aaron Fox out due to injury, Mitchell received his second career start, and the first in a string of seven straight starts with the Kings. While he's returned to the bench post-trade deadline and Fox's return, he's continued his stellar play.

In his last 10 games, Mitchell is averaging 16.1 points, 2.8 rebounds and 4.6 assists, and doing so with better efficiency than he has all season (All four categories in the table above are upticks from his first 43 games).

Mitchell's increasing minutes have been the largest reason for his success. Normally, that's a thinly veiled way of saying that nothing's changed — but in Mitchell's case, it's quite the contrary!

With the ball in his hands more, and more opportunities on the court, he's been more able to adapt and search out his balance in the offense between controlling the rock and moving off of it. Throughout the year, I've consistently wished Mitchell would move more without the ball. Lo and behold, it's happening!

A large reason for his improvement as a catch-and-shoot player (significant concern pre-draft) has been his willingness to move off the ball and relocate into open space.

He's dishing out of paint touches and quickly twirling out to the slot.

Making yourself available is a really important part of becoming a better shooter (and offensive player in general), and it's helped Mitchell to flow within an offense more.

Davion greatly struggled for much of the season to adapt to NBA length and speed — something that happens to most rookies — but for small guards who need the ball, it can be an adventure. Better off-ball movement is one of the first cogs for his further development.

He has to thrive on the margins, as the easier modes of efficient offense aren't as readily available to him. Can he find an extra step or sliver of space through good screening or quick handoffs?

He's started to. Sacramento's offense is heavily trending in that direction after trading for Domantas Sabonis, one of the best and most dynamic screeners in basketball.

What's so intriguing about Mitchell is his ability to exploit those margins. While yes, he is small, he is also perhaps the most explosive player on the Kings' roster. His first step is bonkers, he has a shifty handle, and he's a decent enough leaper to where he's not a solely below-the-rim athlete.

Earlier this season, he was belting line-drives to the rim, packed with power undoubtedly, but a line-drive is still a straight-on, squared-up attempt. It's so tough to consistently win by overpowering your defender in the NBA unless you have overwhelming size and physicality. Mitchell can win with power, but he has to pick his spots.

He's shown very encouraging finishes at the rim through contact.

When he lines up a drive to set up an unprepared or unequipped defender, Mitchell unleashes one of my favorite moves in the league right now.

I struggle to call it a "hesi" because it's so insanely quick, but he throws out this stutter step often with an in-and-out or hesitation dribble that just DUSTS defenders like no other. The suddenness is devastating.

He's converting a blistering 74.0% at the rim over his last 10 contests per Cleaning the Glass; that at-the-rim field-goal percentage was at 59.0% before this stretch.

However, his shot profile over this time has been incredibly telling, as 25.0% of Mitchell's total attempts came at the rim prior to Jan. 26; that number has since shrunk to 17.0%, with 36.0% of his shots coming from the mid-range and the remaining 47.0% attempts from three.

Mitchell's pacing has adapted. As mentioned earlier, less line-drives and more change-ups exist in his diet; he's more actively looking to go east and west, keeping his dribble alive without going straight to the rim as often.

Mitchell really excels at utilizing "Horford screens" from his bigs in the dunker spot (Listen and subscribe!) or on the roll. It's essentially an illegal-ish screen that doesn't always get called, made famous by Al Horford and his sealing protege, Daniel Theis.

While it may seem counterintuitive to get to the rim less, thus is the life of a combo guard. As explosive and powerful as Davion is, intuitive rim-protectors can sniff out his headlong hesitations.

With time, he'll likely develop more counters, which he needs; he really only has one or two go-to moves. While they're fantastic, we are approaching the point to where it is going to be on the scouting report.

His prolific pull-up shooting from deep has opened up more possibilities to probe. Teams still routinely go under on his ball-screens, but he's punished them for doing so.

Mitchell's pull-up two is a useful tool, and one he has to use as a jab. The quickness and explosiveness with which he can rise into it is arguably more of a threat right now than its effectiveness. Defenses are more apt to give him the shot, but he's so quick that they can't afford to fully sag off into the paint.

It's like his jab. If he doesn't utilize it, the defense may forget what he can do if they're not antagonized into being on-guard. They may find comfort in not paying attention. It's his basis upon which his interior game is built.

The space he can create in isolation is astounding.

Again, the effectiveness is not fully there yet, but what he has done — and the improvements he's made along with the creation flashes he's shown — is head-turning.

The play Mitchell has put together over the past three weeks is incredibly enticing, but there's still room for growth, as he looks to take further steps on a team headed in a new direction after trading Tyrese Haliburton.

One area I really want to see from him grow is his floater game and some of his decceleration. He's adept at sudden stops into a pull-up, but getting into his floater has felt mixed in my viewings. He can look to shy away from contact and try to force up shots with his off-hand away from the rim — which makes sense, as he's trying to shield the ball — but he often seems to be fighting his own explosiveness on those touch shots.

It's not a massive detriment, but something to monitor as he continues to create on the margins.

Opposing defenses have started to put longer, rangier wings on Mitchell rather than a guard he can take off the dribble. He's shown an aptitude to find meaningful ways to attack those defenders, but it's worth keeping an eye on as he continues to draw more attention moving forward.

Without a great screen, Davion's game can be greatly hindered.

He certainly can create without screens, as seen already, but when he needs to operate through screens, they need to make real contact. Rear contests and length can throw off his rhythm as a pull-up shooter.

Mitchell is by no means a finished product, though he might garner some dark horse All-Defense votes! I wouldn't likely include him on my teams, but he'd make the short list for guards (Sacramento, quietly league average defensively over the last two weeks!). The offensive strides he's made have been incredibly impressive throughout the season. His growing gravity is opening passing windows that weren't consistently there earlier in the year. I'm really excited to see how he handles his development!

He has a difficult path forward to hit higher offensive outcomes, but Davion Mitchell is thriving on the margins already.