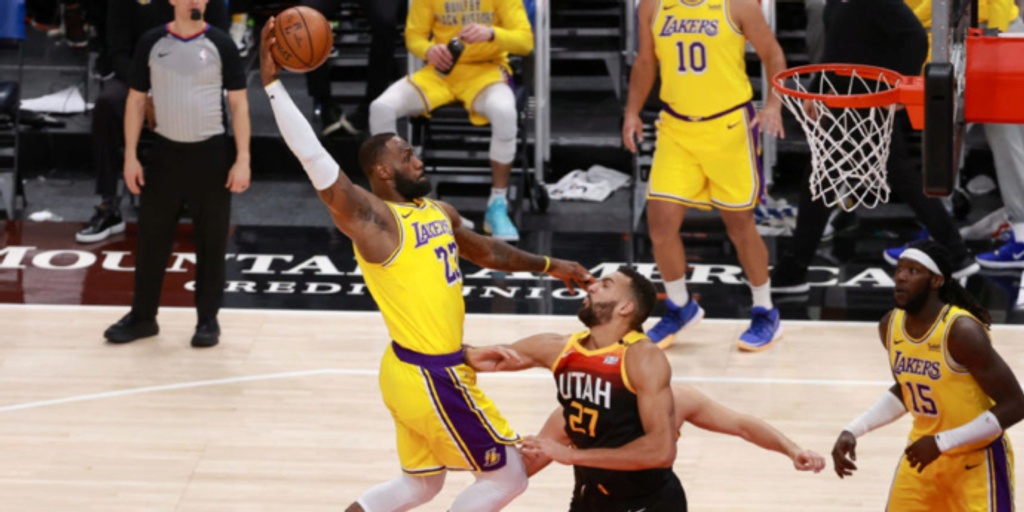 NBA Roundtable: Who's the team to beat in the Western Conference?

Unfortunately, Jamal Murray's season-ending injury likely kills Denver's shot at contending this season, but that still leaves several uber-talented teams fighting one spot in the NBA Finals. With so much competition, we recently asked our BasketballNews.com staff the following question:

Who's the team to beat in the Western Conference?

Alex Kennedy: If the Los Angeles Lakers are healthy, they’re going to be very difficult to dethrone. However, since they aren’t at 100% at the moment, so I’ll go with the Utah Jazz. Not only do they have the NBA’s best record, they are the only team with a top-four offense and defense; they’re scoring 115.5 points per 100 possessions (third-best in the NBA) and allowing 105.9 points per 100 possessions (fourth-best). They are shooting 38.9% percent from deep and knocking down an unprecedented 16.8 threes per game. The NBA record for most threes per game belongs to the 2018-19 Houston Rockets, who made 16.1 per game at a 35.6% clip. The Jazz are putting on a shooting clinic every night, and they have a very balanced attack (with six players averaging at least 12.0 points). And unlike other contenders, the Jazz have continuity and chemistry (as Rudy Gobert pointed out in a recent interview with BasketballNews.com). It’s time to stop sleeping on this Jazz team.

Nekias Duncan: I think you still have to respect the champions, assuming they get healthy. A Laker squad with LeBron James and Anthony Davis should be favored if they’re available. In the event that they aren’t, I’m kinda drinking the Phoenix Suns Kool-aid. I love their blend of shot creation, shooting, defensive versatility, and toughness.

Moke Hamilton: The Lakers. LeBron James is obviously a year older and both he and Anthony Davis have had injury issues this season, but they’re the defending champs and they’ve managed to add Andre Drummond and Ben McLemore to what was already a talented team. If I’m them, I’m not necessarily fearing any other team in the Western Conference, though the Clippers would certainly be the one that I’d be thinking about at night time. Still, though, I’m not sure how you can go against picking the defending champs, especially knowing that James will soon be back in the lineup.

Spencer Davies: It’s probably foolish to doubt the reigning champions, but there’s something about the top-four teams in the West that makes me a believer. As good as the Utah Jazz and Phoenix Suns have been at methodically dissecting their opponents, I just have a certain feeling about the Los Angeles Clippers. With Tyronn Lue at the helm, this group has shown that they’re much more than "Kawhi Leonard, Paul George and the rest." They have legitimate versatility at the center position with Ivica Zubac and Serge Ibaka, reliable veterans in Marcus Morris, Nicolas Batum and the recently-acquired Rajon Rondo, and an extremely confident Reggie Jackson manning the point with Patrick Beverley on the mend. It’s the Clippers’ depth -- I didn’t even mention the growth of Terance Mann and sharpshooter Luke Kennard -- that makes me think things could go better this postseason.

Ethan Fuller: Well, the team to dethrone is the Los Angeles Lakers. But I'm dangerously close to putting all my chips in on the Phoenix Suns. I love everything about this team. Phoenix is one of two teams with a top-six offensive and defensive rating (along with Utah); Milwaukee just missed the cut (fifth-best offensive rating, eighth-best defensive rating). The Suns’ roster meshes so well together under Monty Williams. They're 28-7 since February, and I think it's time to peg them as a genuine title contender.

Chris Sheridan: The easy answer is the Lakers. They are just so loaded.... But since everyone will likely have the same answer, I will pick Utah because of the fact that they have the best record in the NBA and they are very good at putting up points three at a time.

Jannelle Moore: The team to beat in the West, in my opinion, is Utah. Their three-point shooting and three-point defense as a collective are two huge reasons as to why they have the best record in the league -- along with the continued emergence of Donovan Mitchell and Rudy Gobert’s impact defensively. This team has been hard to stop, but I do wonder whether this is sustainable in the playoffs. We'll see what they do on the biggest stage.

Jonathan Concool: I mean, I think it has to be the defending champs. Are the Los Angeles Lakers the best team in the West right now? No. But you still have to respect the reigning champs, and with Anthony Davis and LeBron James set to return to the court soon, don’t overlook the Lakers as they look to make another postseason run.

Mark Gunnels: It has to be the Lakers, if healthy. Until we see LeBron James and Anthony Davis lose four times to the same team, this will always be the answer.