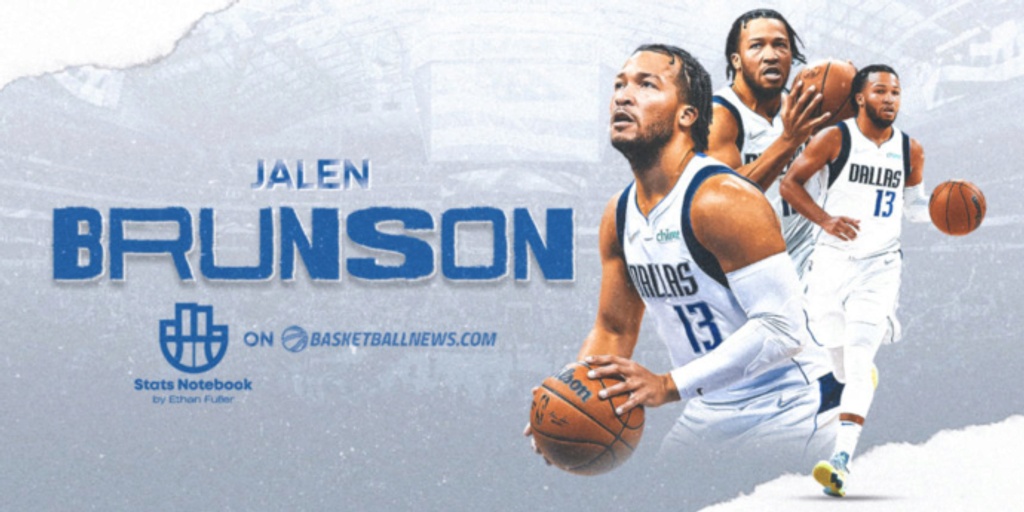 NBA Stats Notebook: Jalen Brunson is in the driver's seat

The NBA Playoffs can initially seem like a statistical nightmare littered with small sample sizes, outlier performances and a lack of context. Those challenges also make the postseason one of the most exciting sandboxes for analysis — a place to marvel at a player's career-defining games and wonder: Is this replicable?

That's what I thought as I watched Jalen Brunson's dynamic 41-point explosion unfold in Monday's 110-104 win over the Jazz in Game 2. Brunson was simply unstoppable, stepping up in the absence of Luka Doncic to turn a series that felt like a lost cause into a very winnable matchup. He's currently tied for the second-highest scoring outing in the 2022 playoffs with DeMar DeRozan.

More interesting to me, though, are Brunson's two games in attack mode. His mark of 24 drives to the basket per game leads all postseason players, and his average of 13.5 field goal attempts per game via drives ranks second behind Donovan Mitchell. Brunson toasted a disjointed Utah defense in Game 2, blowing by opponents 1-on-1 and dissecting them with his shifty ball-handling.

So to my question: Is this sustainable enough to propel the Mavericks to the next round, with or without Doncic? Though 40-point games might be a tall ask, Brunson has already proven himself to be one of the premier driving threats in the entire NBA.

Let's travel back to the regular season. According to Second Spectrum, Brunson drove toward the basket 13.6 times per game, good for 17th in the NBA but well under his current playoff pace. However, Brunson was not the lead ball-handler or driving catalyst for most of the season. Those responsibilities belonged to Doncic, who was second at a whopping 22.2 drives per game.

That being said, Brunson's 13.6 drives were the second-most in the league among secondary options, behind only Caris LeVert, who split time with the Pacers and Cavaliers. So he did attack with high frequency relative to his role, and when Brunson did, he was extremely effective.

The 25-year-old drilled 56.7% of his driving field goal attempts, eighth among 112 players averaging at least 5 drives per game. His 4.5% turnover rate was the seventh-lowest in that group.

What makes Brunson so successful? Though he doesn't get all the way to the rim very often (40th percentile at his position), he is simply an elite finisher around the basket. This regular season, the 6-foot-3-inch combo guard finished 68% of his attempts within 4 feet of the cup, per Cleaning the Glass — fourth among all guards.

Brunson's acceleration and deceleration skills are eye-catching. He can use a quick crossover or between-the-legs dribble to instantly get up to speed and blow past defenders. Then, he gets the ball high early on his layup attempts, and has the strength to deal with contact from contesting opponents. There's nifty footwork in the above clips too, reinforcing that Brunson is not just a straight-line player.

While Brunson is strong at the rim, he is lethal just beyond it. A whopping 36% of his field goal attempts came in the "short mid-range" area between 4 and 14 feet from the basket. He knocked down 51% of those attempts, which is fifth among guards with at least 800 minutes played, per Cleaning the Glass.

Here, you see the same on/off-speed changes, plus a methodical probing of the defense to find floaters and mid-range pull-ups.

These are some of the plays that stood out to me from the first two playoff games. Not all of the shots go in, but they demonstrate the confidence Brunson has in his ability to generate open looks. Brunson can turn the corner on opponents who switch or show aggressively on ball-screens, and pin defenders on his back and rock into a floater. He also has flashed a liking to attacking Rudy Gobert in deep drop coverage, getting the center on his heels and pulling back out for a mid-range jumper.

Utah can't really counter. Gobert is going to be a drop defender for the rest of the playoffs, and defenders like Mitchell, Jordan Clarkson, Royce O'Neale and Bojan Bogdanovic just don't seem to have the strength or lateral quickness to keep Brunson in front. That's especially devastating in pick-and-roll actions, where Brunson was frankly dominant in the regular season. Take a look at his numbers among the 99 players who logged at least 150 possessions as a pick-and-roll ball-handler:

Brunson is a poster child for reliability and soundly moves the ball, boasting an assist rate of 23.8% (75th percentile at his position) and an overall turnover rate of 9.4% (77th percentile). But that often overshadows his untapped upside as a scoring engine, which we saw in Game 2. Brunson did knock down 6 of his 10 pull-up attempts from long range in the victory. That likely won't sustain; he shot just 31.0% on pull-up threes on low volume in the regular season.

If Doncic returns soon, Brunson's life as a driver should become easier with the defense's focus shifted towards the Mavericks' superstar. Until then, Brunson has shown he's more than capable of holding down the fort as the top scoring option. Hopefully, offseason spenders recognize Brunson's malleability and pay the upcoming free agent accordingly.