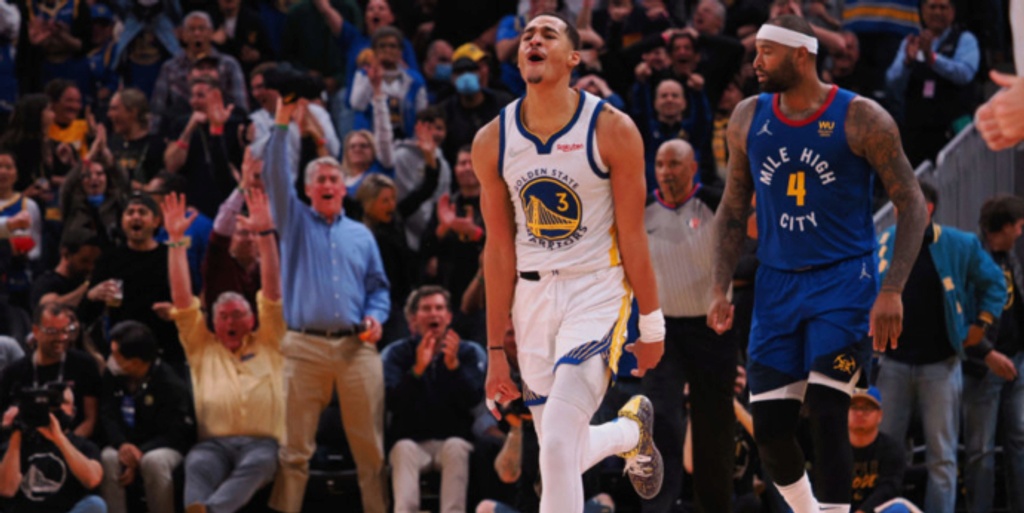 Jordan Poole is even better than we could've imagined

In 2015, Nick U’Ren created a monster when he advised Golden State Warriors head coach Steve Kerr to insert Andre Iguodola into the team's starting lineup after falling behind 2-1 to the Cleveland Cavaliers in the NBA Finals.

From there, Iguodala, Harrison Barnes, Stephen Curry, Klay Thompson and soon-to-be Defensive Player of the Year Draymond Green passed judgment on the Cavaliers in a performance that earned them the sobriquet “The Death Lineup.”

The Murderers’ Row cast proceeded to destroy all that stood in its path until an all-time performance from LeBron James forced the unit to retool, subbing out the promising young Barnes with sure-fire Hall-of-Famer Kevin Durant.

In the time they shared the court together from 2014 to 2019, both "The Death Lineup" and "The Hamptons Five" eviscerated opposing teams.

Since then, the Warriors have failed to rekindle the spark ignited during that epoch; that is, until they stumbled upon the Curry-Thompson-Green-Andrew Wiggins-Jordan Poole configuration.

And while it’s easy to identify the parallels that exist between Iguadola’s role at the time and Wiggins’ contributions to this current rendition, the real key to this group’s synergy is Poole.

Since Durant’s departure in 2019, Golden State has struggled to find a second pressure point that can bend defenses and shoulder some of Curry’s massive offensive burden.

Poole checks this box with permanent ink, and like his predecessors, he’s a true three-level scorer:

*Data Provided by Cleaning the Glass

You may recall that the last time we spoke about Poole. I included a similar chart only comparing him to Tyler Herro. Well, that’s because I didn’t have the cojones to say what needed to be said. Now, Poole's recent stretch warrants the safety gloves being taken off.

Let’s widen the parameters of our examination and compare Poole’s scoring volume/efficiency to the most prominent highly-touted second/third year guards and wings.

*Data Provided by Cleaning the Glass

Looking down the list, it’s hard to see anyone that matches Poole’s scoring balance.

LaMelo Ball and Darius Garland struggle finishing around the rim more than he does.

Anthony Edwards can’t make teams pay in the mid-range the way he can at this juncture.

Ja Morant doesn’t boast the limitless range that he has right now.

And the Tyrese tandem doesn’t handle the same level of volume.

The one tidbit I found most interesting is that, other than Morant (a certified free-throw-drawing jukebox) and Cole Anthony (master of the Timbs), no one on the list above surpasses Poole’s foul-drawing rate.

Poole's scoring versatility also manifests himself in his on-ball/off-ball game (a hallmark feature of great scorers). For instance, in his first two career playoff games, he’s shooting 8 of 14 (57.1%) on shots where he takes 0-to-2 dribbles (typically assisted looks) and 11 of 15 (73.3%) on shots where he takes 3 or more dribbles (typically unassisted looks).

It’s a balance that... *initiate collective sigh from everyone whose heard this a thousand times*... enables Jordan to temporarily masquerade as Steph within the Warriors' system.

I know I’ve said it, Warriors writer Joe Viray has said it, our Jackson Frank has said it, and hell, Sports Illustrated's Chris Freaking Herring has said it (please click that last hyperlink, it’s too funny).

But you have to admit, it hits a little different hearing it from Draymond.

Like Curry, Poole has this veneer of unpredictability layered into his attack. You never know where he’s going to pull the trigger because he’s comfortable shooting the ball from any area on the court.

This randomness in his behavior can be credited to his shot form.

As Viray explains to BasketballNews.com: "With Poole, it’s really just about the consistency of everything about his shot: the body positioning, the form. No matter the conditions, whether it’s on catch-and-shoot, pulling up off the dribble, coming off screens. Wide-open, tightly guarded. His shot never falters or falls apart.”

This consistency, as Viray puts it, enables him to “thrive off of chaos.” Like San Antonio Spurs legend Manu Ginobili once upon a time, Poole is reckless — but this wild behavior is subtly calculated in a way that only he can understand.

This frenetic nature is also the key to Poole's playmaking. On the surface, his box-score outputs are meager (4.0 assists per game), and his advanced numbers (passer rating of 5.4) don’t stand out much either.

However, it is the manner in which he facilitates that screams future high-end creator.

First off, Poole possesses incredible north-to-south burst combined with a wirey frame and subliminal ball skills, and that allows him to literally phase through defenders as if he's the basketball adaptation of "The Flash."

Couple that with preternatural instincts that land him at the top of the food chain at the School of Never Backing Down, and Poole can prance his two feet into the paint effortlessly like he’s Steve Nash.

From there, any pass is possible with Poole driving the boat (even Klay’s), and that’s how you end up with sequences like this.

Again, the first thing that comes to mind after watching this play is the presence of disorder. To the naked eye, it looks like something is going to go wrong and that the possession will spiral out into a turnover. But then, it never does.

Biomechanics expert @polarfall credits this phenomenon to Poole's stability in his neck.

“To me, the most outstanding part of Poole’s outstanding balance and body ability is his neck. His neck is like a Gimbal Camera. No matter what direction he moves in he’s able to keep it straight. It’s a special advantage guys like him and Kyrie Irving possess,” he told BasketballNews.com.

Remember, the best playmakers aren’t always the ones who get the most assists or commit the fewest turnovers. They are the ones who take the most risks, and those who can break the defense and create openings for their teammates where opportunity did not previously exist (think about the Jason Kidd versus Stephon Marbury paradigm).

And with Poole’s rare combination of neck stability, creativity, and audacity, it’s not a stretch to say that nearly every pass in the hoops lexicon is within his playmaking grasp.

A common failing of many young offensively-inclined guards/wings is their shortcomings on the other end of the court; Trae Young is the epitome of this archetype. But we even see this narrative play out with lengthier guys like Haliburton and Ball – both of whom have struggled to contribute to even league-average defenses (although personnel is partially to blame in those instances as well).

Poole has his own struggles, particularly at the point-of-attack, where he has difficulty keeping up with speedier opponents with great East-to-West agility. However, he’s already demonstrated the capacity to contribute to not only a good defense, but an all-time great one.

The dirty little secret about this NBA season is that before the Boston Celtics started completely stonewalling offenses at the turn of the New Year, it was the Warriors who had the league’s best unit of fortification (and a historic one at that).

Poole isn’t exceptional, but he does what he needs to. He communicates and rotates, and sometimes, he’s even able to exercise the supreme vision he uses to make plays on the offensive end to help him create events on the defensive side as well.

And thanks to his superior height, wingspan and traditional athleticism, he has the potential to be an even better defender than Curry. You know, the guy who's played significant minutes on six top-5 defenses since 2014 (per Basketball-Reference).

Overall, Poole's recent hot stretch has me rethinking my recent proclamation about the reasonable limits of his ceiling.

Maybe I was being conservative. Maybe he’s something more than just a fun young player. Maybe he’s better than all the other guys his age. And maybe he truly is the worthy heir to the throne of the Golden State dynasty.

It’s hard to say because Jordan Poole is already too good to even imagine.