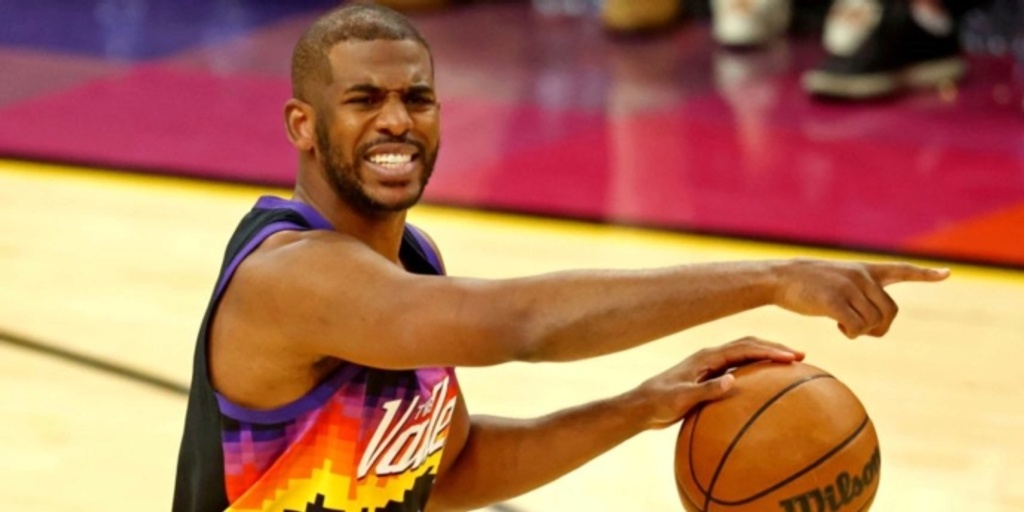 With no Devin Booker, the Phoenix Suns will need a lift

Not only are they painful and annoying to deal with, they have the ability to linger. You never quite know when you're in the clear. As Charles Barkley alluded to following the New Orleans Pelicans' 125-114 Game 2 victory, you can be 100% one day and back on the shelf the next.

This is the plight of Phoenix Suns star Devin Booker. After cooking in the first half to the tune of 31 points, he tweaked his hamstring in the third quarter and didn't return. As of this writing, there's no timetable for Booker's return. That obviously puts Booker's Game 3 status in flux, but, again, hamstring injuries are tricky. Even when he's back, a close eye on his health will be warranted.

Following Booker's injury, more of the offense naturally shifted to Chris Paul. The burden was clear in the fourth quarter, where Paul played all 12 minutes and received 25 ball-screens in the process, via Second Spectrum. It was only the seventh time this season that Paul received more than 20 in a fourth quarter; the only game where Paul received more screens (26 against the San Antonio Spurs on December 6) was one without Booker.

To that point, the Suns got pretty busy in that quarter. Trips featuring a Paul ball screen generated nearly 1.27 points per possession (PPP); for reference, the Utah Jazz led the NBA in offensive rating at 1.16 PPP.

The Suns were even better against the New Orleans Pelicans on Tuesday night, with Paul-led ball screens generating nearly 1.5 PPP. To do that is insane; to do that without Booker as a release valve or bail-out option is even more ridiculous.

Without Booker, the Suns needed a lift. A literal one. They often set up pick-and-rolls with ghost screens before Paul and his center — JaVale McGee to begin the quarter, then Deandre Ayton later — did their dance.

The Suns opened the fourth quarter with a pick-and-lift combo. Landry Shamet ghosted a screen to end up on the left wing, then Paul and McGee flowed into a pick-and-roll. That placed Jose Alvarado into a pick-your-poison situation. 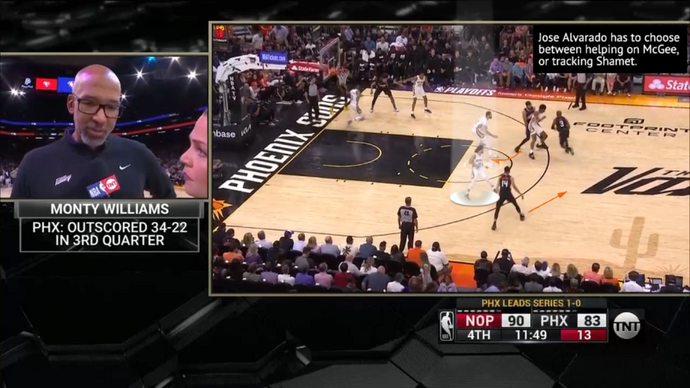 With Herb Jones getting caught up on the screen for Paul, Larry Nance Jr. steps up to take away a pull-up middy. Since Nance Jr. stepped up to Paul, Alvarado dropped down to account for McGee's roll. If you're counting at home, that's three Pelicans accounting for two Suns. There's a guy missing. 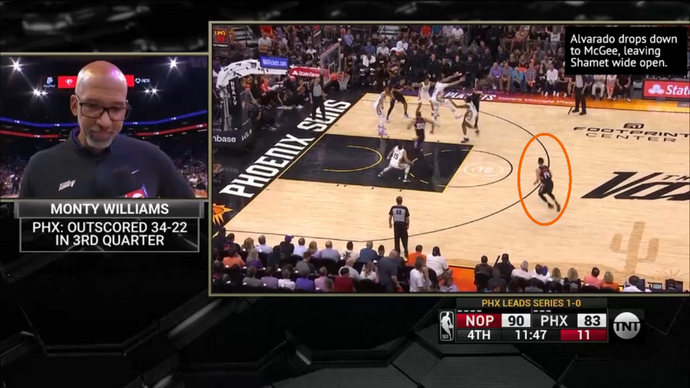 The beauty of the Suns' offense is that there are layers and variations to everything they do. They can get more creative, like here when they threw in an exit screen for Shamet while having Cam Johnson (right corner) lift during Ayton's roll.

They can also simplify it — go basic spread pick-and-roll with a lone shooter on a side. Watch Johnson, first and foremost, while also noting that the Pelicans went from drop coverage to a more aggressive scheme with Jonas Valanciunas.

That's the good stuff. It's imperative that the Suns manipulate helpers to create advantages, because their best advantage-creator is on the mend right now.

However, this is a two-way street. Much like the Suns were — and will need to be — able to generate goodness with their lifts, they also have to be much better about defending them. The Pelicans had some fun in Game 2.

My favorite stretch came midway-ish through the third quarter. The Pelicans set up a similar exit-screen strategy on one side, while Trey Murphy ghosted a screen and relocated to the right wing. That left the right corner open, giving Nance Jr. an unhealthy amount of space to run into for this lob.

A little bit later, the Pelicans set up the same thing. With the Suns keying in on the Nance Jr. lob, Murphy executed a lift of his own and got three points out of it.

I love a good half-court counter.

This series was always going to come down to a blend of half-court execution and #ethical shot-making. The Suns had Booker as a headliner, Paul as a guy who can do it in spurts (hello, Game 1) and a ridiculously deep playbook. The Pelicans have Brandon Ingram, CJ McCollum and some nifty half-court tricks in their own bag.

If Booker is out of the equation, the Suns will have to lean more on the half-court execution. Their off-ball movement may be the lift they need.