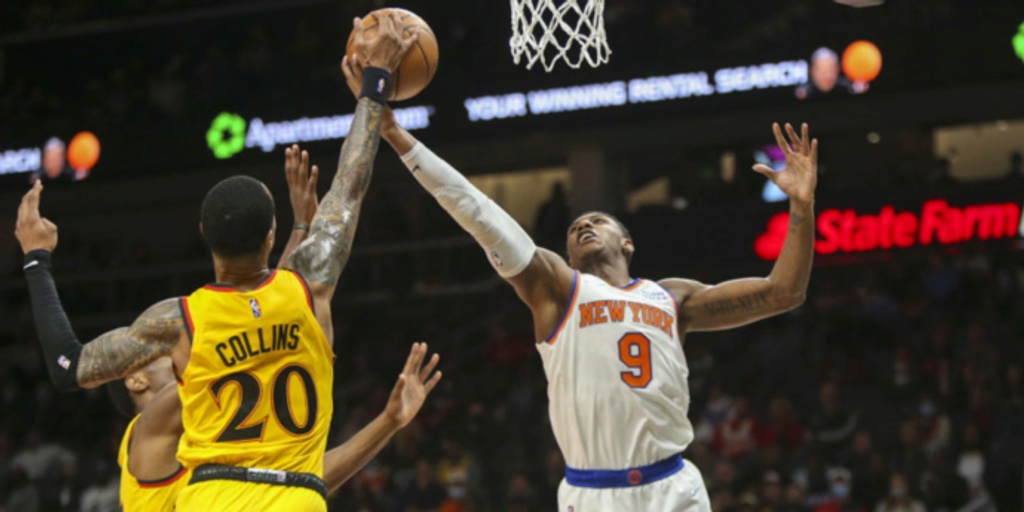 Almost every franchise has cleared the halfway point of its schedule. At this mark, I'm listing the most aggravating, season-defining gripe for every squad on this week's list. Some are out of teams' control, like injuries and COVID absences. Others could on-court tendencies, front office decisions or underachieving players.

Teams stuck in the NBA Sour Rankings are all there for the same reason: they're disappointing. But how teams arrive there, and what really gets a fan base on edge, can vary wildly.

Escaping the Sour Rankings: No one! It looks like we've found a sweet spot. Every team stays.

The Rockets are trudging through a rebuild, and most of their young talent has at least flashed promise at some point in the season. Mark Schindler and Mat Issa just wrote a fantastic two-part breakdown on the prospect core. But Houston's best player has also been one of its biggest concerns so far.

Christian Wood is, on paper, the leader of the team. But he's been ranging from inconsistent to uninterested this season. That includes a team-imposed one-game suspension for refusing to sub into a game (on top of being benched for showing up late to practice) and fluctuating effort on defense, as Nekias Duncan and Steve Jones Jr. referenced on The Dunker Spot. Wood sets the tone for Houston's culture and intensity in many ways, and you never know if he'll bring it on any given night.

The Clippers have soldiered on through brutal circumstances with significant injuries to their two stars. Now, according to Bleacher Report's Jake Fischer, they're willing to listen to offers on the majority of their veterans and potentially viewing this season as a Warriors-esque mini-tank.

That's probably the right idea at this point, given they are reportedly moving forward as if George will be out for the season. Those injuries have been the worst part of the season, and unfortunately puts a pause button on any attempt at a title.

Bradley Beal is hitting just 29.8% of his three-pointers. Davis Bertans is posting a 33.8% clip. Raul Neto is at 23.1%. Each of those are career-lows. Spencer Dinwiddie (32.6%), Kyle Kuzma (32.2%), Corey Kispert (32.1%) and Deni Avdija (29.8%) have also experienced ups and downs. The Wizards are 26th in team three-point percentage and have two rotation players — Kentavious Caldwell-Pope and Aaron Holiday — hitting above 34% from long range.

I mean... that's pretty ice-cold. And with a defense that was expectedly mediocre, something has to settle in for Washington to get back on track in the playoff race.

We're not going to discuss Russell Westbrook here, because as polarizing as he is, the Lakers have bigger things to solve. Hollywood boasts the second-best offensive rating in the NBA over the past two weeks. But the team is 2-3 in that span because it wields the second-worst defensive rating, part of a consistent collapse from recent years.

The Lakers get destroyed by opponents on the offensive glass. They give up the second-highest frequency of at-rim attempts out of any team in the league. Anthony Davis' injury has once again exposed a complete lack of rim-protection, and with less effective perimeter stoppers, opponents can attack whenever they want.

The Knicks have a nice little three-game winning streak and swung a trade for Cam Reddish that has been given a consensus "good for you" by the public sphere. They accordingly get a positive bump in the Sour Rankings with RJ Barrett coming to life over the recent stretch.

Julius Randle's regression has been the most frustrating development over the course of the season. His three-point rate has plummeted ten percentage points and made 2020-21 look like a serious outlier. He's had a difficult time making the right play consistently on offense, while his defense on the perimeter has been lacking. Six months ago, Randle was the face of the franchise. Now he's inspiring pessimism.

The clock appears to be ticking on De'Aaron Fox's development as a cornerstone for the Kings. Sam Amick of The Athletic reports that Fox and Tyrese Haliburton are up for discussion in trade conversations. Fox in particular has been the prized piece in Sacramento's rebuild attempt, but the point guard has hit a road block in his growth.

This season, Fox has seen his scoring and passing numbers go down in the box score. Per Cleaning the Glass, he actually has the worst assist-to-usage rate of any player at his position. His defensive energy still waxes and wanes, and he's shooting 25.3% from long range. If Fox does get traded, it signals another failed era and a rollover for the Kings.

The most annoying part of the season to date is that Indiana hasn't made a move yet. The Pacers are 15-28 and clearly out of the playoff race, and yet they still roll with a largely similar rotation as the trade deadline nears. Of course, there's no real rush to make a move between now and February, but fans anticipating a teardown can get antsy.

According to Shams Charania last week, things are moving with regard to potential Myles Turner and Caris LeVert deals. A Domantas Sabonis trade seems less likely, which makes sense given his tier of stardom. Either way, the next month is a critical juncture for the Pacers to maximize their future path, and should leave no trade-talk stone unturned by the All-Star break.

Celtics fans yell about all sorts of problems with this team, but I think the real dagger has been the second-half woes, because there simply isn't an easy answer. Boston is 2.5 wins below their expected count (26th in the NBA), per Cleaning the Glass, in large part due to some epic meltdowns.

The Celtics are shooting 31.4% from three-point range in the fourth-quarter, which is the fifth-lowest mark. They average 4.8 assists per game as a team in the fourth quarter — second-lowest. They are 9-16 in clutch games — the fourth-worst winning percentage. The breakdowns have been spectacular.

So changing to a first-year head coach and making some minor rotation tweaks didn't flip around a flawed roster with years of bad defense on record? Interesting.

Portland gives up the highest opposing effective field goal percentage of any team in the NBA. They give up top-10 shooting percentages from every area on the court except the least valuable spot — the long two. The Blazers are working extremely hard to pass Houston for the worst defensive rating, which would be quite the... achievement. There's way too much to fix in Portland.

I wrote recently about how John Collins' frustrations regarding his role have at least some stats-related ground to stand on. The conclusions spawn plenty of questions on his fit with Clint Capela, Nate McMillan's strategy and where the Hawks even plan to go next.

That's been the most distressing development: this young team, with a young superstar in Trae Young, has gotten markedly worse when it should be trending up. Now Collins could be a trade asset when he has been the No. 2 cornerstone for the franchise since he was drafted in 2017. The pieces should be here — why isn't it equating to winning when it did last season?