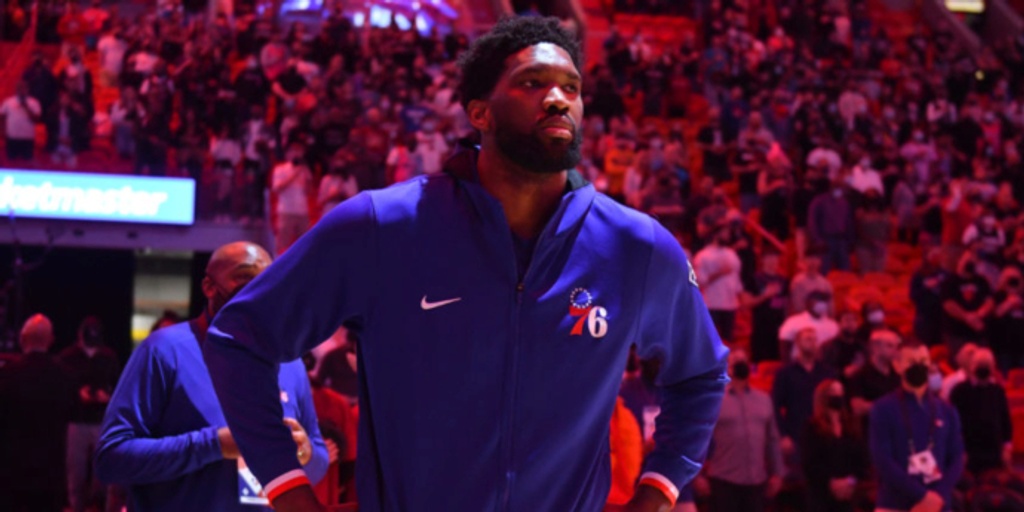 Late in the second quarter of a January game between the Philadelphia 76ers and Houston Rockets, Joel Embiid is operating from his comfort zone of the left block. He faces up, drives baseline and transitions into a shot, but doesn’t quite find the edge to finish inside.

As he pivots back toward the hoop and away from the baseline, Garrison Mathews is there to offer a soft double-team. A hook shot is still available for Embiid and would be a fine decision. He’s taller than both Mathews and his primary defender, Christian Wood. Extending over the top would present a clean release.

But after Charlie Brown Jr. cuts to occupy Kevin Porter Jr., Furkan Kormaz, a career 36 percent three-point shooter, is wide open. So, in one swift motion, Embiid spins, stares down Brown to dissuade Porter from closing out and delivers a no-look pass to set up Korkmaz.

Korkmaz missing badly is a trivial matter. That’s not a pass Embiid likely dishes out a year ago, nor is it one he likely makes at any stage of his career prior to this season. Late arriving help like the type Mathews brings would routinely bury him.

Nowadays, the seven-foot center is playing the best basketball of his career, in part because he’s processing the game better than ever. Philadelphia is 22-9 when he’s in the lineup. Once a middling 16-16 squad, the 25-17 Sixers have won nine of their last 10 and are just 2.5 games back of the top seed in the East.

Embiid isn’t the front-runner for MVP, and he might not even finish top-three if voting was finalized today. He is, however, among the six-man race of superstars vying for the award, and perhaps nobody has been playing better basketball than him since early December.

After finishing second in MVP voting last season and registering 28-10.5-3-1.5-1 on 63% TS across 11 playoff games, Embiid has returned as an improved player to reach unexplored heights.

The most discernible growth is his composure, control and discretion offensively, which often manifest in his playmaking. His 24.3% assist rate is a career-high, while his 11.5% turnover rate is a career-low, according to Cleaning The Glass. Those numbers aren’t always a worthwhile proxy for passing ability, but they’re illuminating and relevant with Embiid.

For years, he’s been capable of whirling skip passes from the post to corner shooters. He incorporated them on a consistent basis last season, yet was still prone to succumbing against double-teams and struggled to find teammates on the interior. This year, the skip pass remains valuable and he’s diversifying the reads in his arsenal.

Embiid has developed nifty synergy with Matisse Thybulle roaming the dunker spot. He keeps his dribble alive against double-teams and avoids them altogether more regularly. In years past, help would come and he’d be neutralized, unsure of how to proceed and prone to shying away from the defense, desperate for some sort of counter.

Even if he’s not entirely infallible, those moments of complete ineptitude are a relic. He’s built upon last season’s improvements to become an exceptionally high-level passing center who organizes the offense and picks apart defenses with skill, flair and feel.

More than ever before, he’s simply aware of how much pressure he applies on opponents and how to parlay that into effective offense for everyone. Previously, he had a tendency to make decisions based solely upon his individual defender and the best way to score against them.

Shifting his approach to identify the positioning of everyone on the floor and act based on that perspective has facilitated his maturation. Trouble used to arise when the opposition sped up his decision-making. That rarely transpires anymore. Teams don’t really deter Embiid from his first option. If they do, he calmly moves onto a secondary plan, a critical facet in his rise from All-NBA superstar to MVP-caliber superstar.

While a portion of all this was prevalent last season, Embiid also benefited from the best midrange shooting campaign of his career, which masked some of the longstanding issues in his offensive style.

According to Cleaning The Glass, he shot 47% from midrange, six points higher than his previous career-best. This season, he’s back down to 41% but is a more complete, impactful offensive player, and has combated that regression with a retooled means of scanning the court. His TS% is 4.4 points above league average, the second-best mark of his career behind last season’s 6.4 points above average.

Without Ben Simmons around, Embiid’s become the team’s de facto transition energizer. After a rebound, he’s empowered to ignite grab-and-go sequences or simply flow into the normal offense, whether it’s a dribble handoff, high-low action, post-up or off-the-bounce jumper. Some of these occurrences happened in 2020-21, though their frequency has seen a major spike this year.

He boasts dexterous footwork, nimble body control and the requisite handling chops to pilot the break. As it turns out, most defenders have zero interest in being an obstacle between the hoop and a 7-foot, 280-pound point guard barreling downhill.

Arguably the most vital component of Embiid’s 2020-21 transformation was the diversification of his scoring repertoire. He significantly expanded his pull-up game and emerged proficient at commonly initiating offense from spots other than mid-post. That remains true.

With savvy footwork that implies a drive is imminent, he’s masterful at creating space for jumpers against defenders. His shot fake is incredibly lethal. He’s even canned 34.2% of his pull-up triples (13 of 38).

There are vast avenues for Embiid to score. Leading the break. Deep seals inside -- he’s shooting a career-high 72% at the rim, per Cleaning The Glass. The classic post touch. Pick-and-pop threes. Attacking from the perimeter as a driver. Free throws (.592 free-throw rate, second-best of his career).

He knows what he wants, which ranges far and wide, and how to pursue it. Flustering him into suboptimal decisions is a landmark achievement. Compared to his early years, and even in general, the dude is just so dang patient. That development has done wonders for him.

Embiid is not the lone Sixers starter riding a career year. His ball-screen buddy, Seth Curry, has joined him in that regard, averaging 16.3 points on scintillating 63.8% TS.

Most of the credit goes to Curry. He’s a wicked good shooter raining fire all over the floor. Some of it, though, should be attributed to Embiid’s refined screen-setting. For years, he opted to go through the motions of a pick and avoid physical contact. Far from the most glaring issue with Philadelphia’s offense, it still played a role in the struggles.

This season, he’s committed to springing free guys like Curry with his screening. Not every possession is perfect, but there’s significantly more good than any year prior. He’s legitimately stonewalling some players and Curry is reaping the benefits by way of a silky jumper.

The most remarkable part of everything he brings offensively is how defensive-oriented he was entering the league. He’s always been a very good defender, but dating back to 2017-18, has saved a little something for the playoffs. That may still be the case, though he’s playing the best regular season defense since his rookie year right now.

Between his own enhancements and seven games of trial by fire against the fearsome Trae Young-Clint Capela-John Collins trio, it felt like Embiid refined his pick-and-roll coverage substantially last season. Bouncy lob threats still expose his lack of vertical explosion at times, but he’s learned to exquisitely engage the cat-and-mouse game of guarding ball-handler and roller.

He excels at baiting drivers into tossing lobs before retreating to alter or block shots. His positioning and recognition of proper angles in drop coverage are clinical. Philadelphia has broadened its pick-and-roll defense since assistant coach Dan Burke arrived last season, so Embiid is also asked to play at the level of the screen, trap and hedge at times as well, especially the last of those in recent weeks.

Not only has Embiid showcased his merits and technique in pick-and-rolls, but he’s also been supremely active as a general rim protector. In the Sixers’ impressive win over the Heat on Saturday, he almost entirely shut down the paint for them and extinguished (ha, get it, heat, fire) their crunch-time offense.

Miami was quite timid to challenge him and Philadelphia’s perimeter defenders were empowered to run shooters off the arc, knowing Embiid loomed behind, waiting to reinforce their efforts.

Although most games haven’t been that extreme, he executes necessary rotations to influence plays inside the paint. His verticality is masterful and a 280-pound frame means winning the strength battle is a nonstarter for most contestants.

As a rookie, Embiid produced a gaudy 5.1% block rate, one counteracted by 6.9 fouls per 100 possessions. Over the years, he’s become increasingly calculated and that evolution has coalesced in 2021-22.

While he persists as a defensive menace, his block rate sits at a career-low 2.2% and he averages 3.8 fouls per 100 possessions. In fact, he hasn’t fouled out of his past 101 games, and hasn’t even tallied five fouls over his past 38 outings. All this despite the Sixers’ perimeter defense being much worse than last season and inconsistent on the whole.

The Sixers have the NBA’s sixth-ranked defense since Embiid returned from COVID on Nov. 27. That largely stems from him flying around the floor, quarterbacking everyone with vocal communication and avoiding costly penalties (2.6 fouls a night over that 22-game span).

Philadelphia doesn’t solely lean on him defensively. His 36% usage rate is a career high and ranks fourth league-wide, according to Cleaning The Glass. Most of its offensive goodness originates with him.

These aren’t new trends during his Sixers tenure; they’ve long demanded he captain them on both ends. Yet the rate at which Embiid is succeeding in such a complex, burdensome role feels unprecedented for him.

His scoring is elite. His passing is very good. His defense has been stellar. He’s a do-it-all superstar elevating his game to another level and asserting himself into the thick of the MVP discussion for the second consecutive season.