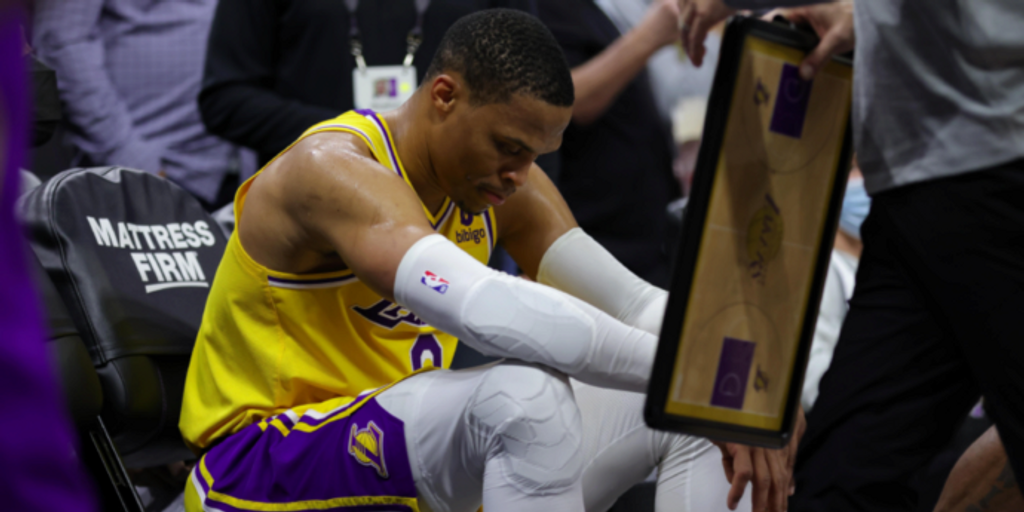 The Russell Westbrook experiment has been a huge failure for Lakers

When the Los Angeles Lakers acquired Russell Westbrook in a blockbuster trade during the 2021 NBA Draft, many eyes looked towards Hollywood as a new Big Three formed. LeBron James and Anthony Davis were already a dynamic duo with a championship on their resume together.

Westbrook’s arrival was a massive change and, if it worked, fireworks would commence in the Western Conference’s arms race for an NBA Finals berth. For multiple years, Los Angeles has been trying to find an ideal backcourt piece to take the ball-handling pressure off LeBron.

However, the fit with Westbrook from the beginning was viewed as clunky. Westbrook isn’t a floor-spacer. Instead, he's an extremely high-usage, on-ball scorer who can facilitate an offense and push the pace.

If the Lakers wanted to see the Westbrook addition lead to a beautiful brand of consistently great basketball, everything around him, James and Davis included, would need to be perfect. Perimeter shooting was of the utmost importance, which Los Angeles addressed head-on during free agency, bringing aboard all of the following plus-40% three-point marksmen: Malik Monk, Carmelo Anthony, Wayne Ellington and Kent Bazemore.

Here’s the issue, though — only Monk and Anthony have made a significant dent within the Lakers’ full-time rotation. Bazemore is being openly shopped before the Feb. 10 trade deadline. Ellington’s hot-and-cold stretches have been too damaging. Trevor Ariza was another offseason addition who has yet to make a certified impact.

So, when canvassing the Lakers’ entire list of issues, there’s no wonder why LeBron’s MVP-level heroics have been unable to pull them out of mediocrity. It also doesn’t help that Davis has been sidelined for the past month with a sprained MCL.

Halfway through the season, Los Angeles is at .500 with a disappointing 21-21 record. LeBron is not at fault. Davis has been inconsistent when he's been on the court — nowhere close to superstar-type play — but who knows where the Lakers would be if he was currently available. The role players haven’t stepped up on a consistent basis, which was the all-in bet Lakers vice president of basketball operations Rob Pelinka made when he brought Westbrook to Hollywood.

All roads lead back to Westbrook when it comes to the real issue at hand for Los Angeles. In the last three games, Westbrook has been a buzzkill for the Lakers, shooting 8 of 40 overall (20%). Even expanding out to a season-long sample size though, Westbrook’s lack of adjustment to being a secondary option has been apparent whenever I tune into the Lakers.

Westbrook is averaging 18.7 points, 8.2 rebounds and 8.1 assists while carrying a below-average 50.4% True Shooting percentage. The polarizing point guard has always checked in below the Mendoza line for efficiency, but that’s been buffered by his sky-high usage rate throughout his career. As the No. 3 option — and more recently at No. 2 in AD’s absence — Westbrook has been unable to find his footing even with the lowest usage rate since his second NBA season (27.6%). Another worrisome advanced metric for Westbrook is his 0.2 VORP (Value Over Replacement Player), which checks in as his worst since entering the league.

More times than not, Westbrook has looked lost when he’s on the court alongside LeBron. It’s eerily similar to the one-year stint Westbrook experienced with James Harden in Houston two seasons ago. That ended in a swift divorce, where Westbrook was sent to the Washington Wizards before ultimately winding up in Hollywood for the 2021-22 campaign.

I think my guy is officially broken mentally now pic.twitter.com/bcZ4EZhjSd

This is Westbrook’s fourth team in four years. We know who the triple-double king is at this point in his illustrious career. We also know the answer to what he is within the construct of a team.

He can be the No. 1 option on a playoff contender, where he can put up his usual monster stat lines without issue. However, in this new environment in Los Angeles, Westbrook is wilting. The problem for Russ and the Lakers is there’s one year remaining on his contract, a player option for an eye-popping $47.1 million.

There’s already been smoke billowing from Los Angeles that the Lakers have been open to shopping Westbrook before February’s trade deadline, including an offer to the Philadelphia 76ers for Ben Simmons. (Unsurprisingly, Philly would not be interested in such a deal.)

If the Lakers pulled off their trade for Buddy Hield on draft night instead of Westbrook, how different would they look? Hield’s brilliance in perimeter shooting wouldn’t cap their salary flexibility, which ultimately could've led to Alex Caruso re-signing in L.A.

Back at that time, it might've been a damning statement to say the Lakers would be better off with a combination of Hield and Caruso compared to Westbrook, but that’s just how the cookie has crumbled for this awkward player-team fit.

The Lakers made their bed with the Westbrook trade, and now, they have to lie in it for (potentially) another 18 months. It’s a shame, because the Lakers had the correct formula in mind to make this work on the court. However, a failure on the part of multiple role players, Davis' inconsistency and health — plus Westbrook looking like a deer in the headlights — has put the good news of LeBron’s excellence at age 37 on the national media backburner.