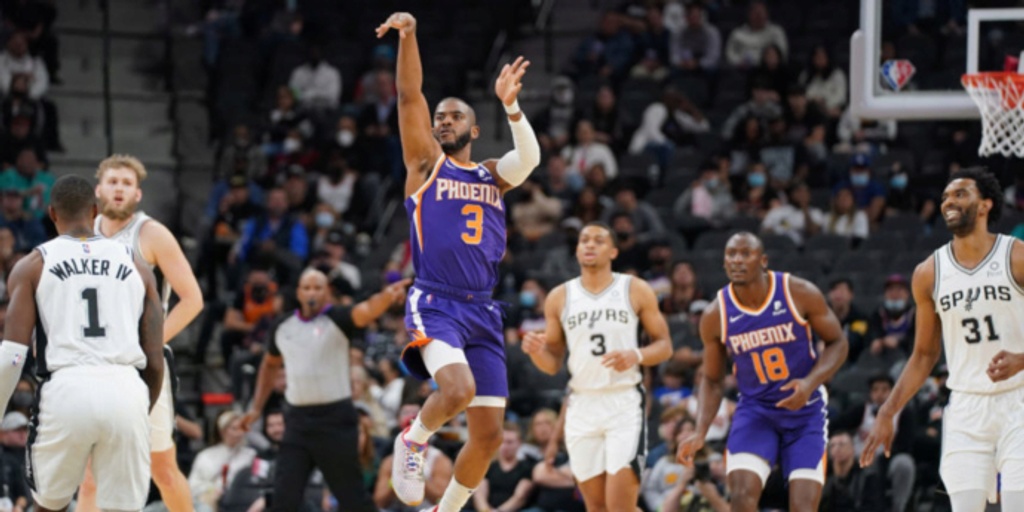 The Phoenix Suns, who have at least three more wins than every other team in the league, retains the top spot in this week's BasketballNews.com Power Rankings.

Phoenix has won 37 of its first 46 games this season, matching the 2006-07 squad for the best start in franchise history. And while LeBron James has been lavished with praise for what he's been able to accomplish this season (and rightfully so), Chris Paul's play has been equally incredible. CP3 poured in a season-high 27 points to go along with 14 assists and 9 rebounds in Monday's win over the Utah Jazz. The 36-year-old Paul is on pace to become the first player in NBA history over the age of 30 to average more than 10 assists and fewer than 3 turnovers per game.

Even the greatest shooter of all-time can fall into a slump. After missing 12 of the 13 three-pointers he attempted in Sunday's victory over the Jazz, Steph Curry's shooting percentage from behind the arc fell below 30% for the month of January. Over his last 10 games, Curry is just 29 of 105 from downtown (27.6%).

The Grizz have lost 3 of their last 5 games, but all five contests have come against teams well above .500. Their two wins during this stretch were impressive (a blowout victory over the Chicago Bulls and a win vs. the Denver Nuggets at altitude). Ja Morant was on fire last week, averaging 35.3 points, 9.0 rebounds and 8.7 assists per contest.

Despite again being forced to play without Kyle Lowry (personal matter) and Tyler Herro (health and safety protocols), the Heat beat the Los Angeles Lakers on Sunday, catapulting Miami to the top of the Eastern Conference. The fact that Heat have the East's best record even though Lowry, Bam Adebayo and Jimmy Butler have played just 14 games together is a testament to the phenomenal coaching job Erik Spoelstra has turned in.

The @Bucks make it three-straight wins as Khris & Jrue combine for 60 🔥 pic.twitter.com/CL6OhZH6ZM

Jrue Holiday returned from injury last week, and the Bucks (who had lost 4 out of 5 with Holiday on the shelf) promptly went on a three-game winning streak. We shouldn't have been surprised, as the Bucks have been deadly when they've had their Big Three healthy and active. Milwaukee is now 18-3 in the 21 games Giannis Antetokounmpo, Khris Middleton and Holiday have all played.

Kevin Love scored a team-high 20 points in the Cavs' victory over the New York Knicks on Monday night. It was Cleveland's seventh victory in its last eight games. Love embracing his role off the bench has been a significant factor in the Cavs' success this season. Over Cleveland's last 20 games, Love is averaging 16.6 points, 7.3 rebounds and 3.0 treys, while shooting 41.4% from downtown and 82.6% from the free-throw line.

The Jazz have lost 8 of their last 11 games. However, Utah was missing Donovan Mitchell, Rudy Gobert and Mike Conley on Monday night in Phoenix; Quin Snyder's bunch still fought tough and actually led the Suns by four points in the fourth quarter before running out of gas.

Nikola Vucevic had been mired in a nasty slump heading into Monday night, but he powered the Bulls past the Oklahoma City Thunder on Monday. It was a much-needed win for Chicago, who had lost 6 of 7 and was coming off an embarrassing blowout loss to the Orlando Magic. Vooch racked up 26 points (on 10 of 18 shooting), 15 rebounds, 4 assists, 4 treys, 3 blocks and a steal in 39 minutes. With Lonzo Ball (left knee) and Alex Caruso (fractured wrist) sidelined for the foreseeable future, the Bulls are going to need Vucevic to continue playing well.

Unfortunately for Joel Embiid — who has scored at least 25 points in 14 straight games — Sixers president of basketball operations Daryl Morey may be content to hold onto Ben Simmons until the offseason. According to Shams Charania and Sam Amick of The Athletic, Morey hopes to use Simmons as a trade chip to land James Harden or another superstar. It really would be a shame if the Sixers waste a year of Embiid's prime, especially when the big man is playing arguably the best basketball of his career.

The Mavs have won 5 of their last 6, with two of those wins coming against the Grizzlies. And according to Eric Pincus of Bleacher Report, Dallas is a potential "dark-horse" candidate to land Pistons forward Jerami Grant at the deadline. The Mavs' offer would reportedly start with a combo of Dorian Finney-Smith and Dwight Powell.

Kyrie Irving has played well for the Nets, but Brooklyn continues to be sieve-like on the defensive end. It's been more than two months since the Nets held an opponent below 99 points. And they've been especially porous in January. In fact, Brooklyn has been the worst defensive team in the NBA this month, allowing 117.3 points per 100 possessions. The only other team in the league with a defensive rating higher than 117 is the Houston Rockets.

On Monday, Nikola Jokic was named the Western Conference Player of the Week after averaging a mind-boggling 36.3 points, 11.3 rebounds, 10.0 assists and 2.3 steals per game. Oh, and he shot 65.0% from the floor, 40.0% from downtown and 86.2% from the charity stripe. Remarkably, it's the first time he's won a Player of the Week award this season.

The Hornets had won 7 of 8 before going ice cold in a loss to the Atlanta Hawks on Sunday, as Charlotte shot just 4 of 36 (11%) from downtown. The Hornets have a tough road back-to-back (at Toronto and Indiana) on Tuesday and Wednesday.

On Sunday, Anthony Edwards racked up 25 points, 4 assists, and 4 triples in the Wolves' victory over the Nets. In the process, he knocked down his 300th career three-pointer, making him the youngest player in league history to achieve that feat and breaking the record previously held by Luka Doncic. However, Ant-Man limped off the floor and into the locker room late in the game after colliding with a defender. Fortunately, Wolves coach Chris Finch said the injury was not serious after the game.

Jayson Tatum had been brutal from downtown (having missed all 17 of his three-point attempts over his three previous games) heading into Sunday's matchup with the Washington Wizards, but the Celtics superstar knocked down career-high 9 triples in Boston's latest win en route to a season-high 51 points. On top of that, he chipped in 10 rebounds and 7 assists for good measure. We'll see if Tatum and the Cs can find some semblance of consistency going forward.

This Raptors team remains frustratingly inconsistent. Thus far this month, they have beaten the Bucks twice (including once in Milwaukee) and the Jazz. Yet, they've also been blown out by the Detroit Pistons and were down 34 points to the Portland Trail Blazers on Sunday. The loss to Portland was Toronto's fifth loss in its last seven games.

The Wiz began an eight-game homestand on Jan. 11 (tied for the longest homestand by any team this season) and won their first two contests. However, Washington has dropped three in a row and 4 of their last 5. Their biggest issue has been on the defensive end, where the team is allowing 113.6 points per 100 possessions in January.

The Knicks are struggling, but New Yorkers have to be encouraged by the strong play of RJ Barrett in 2022. Over the 13 games the Knicks have played dating back to New Year's Eve, Barrett is averaging 23.2 points, 6.6 rebounds, 3.5 assists and 2.2 treys, while shooting 45.6% from the floor and over 39% from downtown.

Heading into MLK Day, the Hawks were riding a five-game losing streak. However, Atlanta registered four impressive wins last week, beating the Bucks, Timberwolves and Heat at home before smashing the Hornets in Charlotte on Sunday. "We are definitely headed in the right direction," Trae Young said after Sunday's victory. "Right now it's more about consistency and keeping it going. We're not satisfied. We know what to do and what we are capable of doing."

The Clips have lost 7 of their last 10 games and just don't have enough firepower to compete on a nightly basis with both Paul George and Kawhi Leonard sidelined. Those two superstars are making more than $78 million in salary this season (which is more than the combined salaries of the entire OKC Thunder team). Late last week, it was reported that PG-13 would miss at least another few weeks as he continues to rehab the torn ulnar collateral ligament in his right elbow.

Two weeks ago, when the Blazers embarked on a six-game road trip, Portland had been just 2-13 on the road over its first 15 road contests this season. However, by beating the Raptors on Sunday in Toronto, the Blazers wrapped up their six-game swing with an impressive 4-2 record.

Playing without leading scorer Brandon Ingram (right ankle sprain), Devonte' Graham carried the Pels to a victory over the Indiana Pacers on Monday night. Graham erupted for 25 points (on 8 of 14 shooting) and added 6 assists, 5 triples, 3 rebounds and a steal. Josh Hart also posted a strong double-double, finishing with 22 points and 10 boards.

Domantas Sabonis has missed each of the Pacers' last three games after suffering a left ankle sprain during the fourth quarter of last Wednesday's win over the Lakers. Goga Bitadze has stepped in the starting lineup for Indy and averaged 13.7 points, 8.3 rebounds and 3.3 assists in 29.5 minutes since Sabonis went down.

De'Aaron Fox sat out Saturday's loss to the Bucks due to left ankle soreness and is listed as questionable for Tuesday's game vs. the Celtics. Last week, Shams Charania of The Athletic reported that the Kings are not planning to trade Fox before the February deadline, instead "informing teams in the marketplace that they want to build around Fox and second-year guard Tyrese Haliburton." This may well be posturing by the Kings; we shall see.

Dejounte Murray has quietly been establishing himself as one of the league's elite young point guards this season. Over the Spurs' past three games, Murray — who is among the league's steal leaders — is averaging 22.3 points, 10.3 rebounds and 12.0 assists (vs. just 2.0 turnovers).

Houston, who recorded an impressive victory over the Jazz last week, has turned down multiple trade offers for veteran shooting guard Eric Gordon, according to Kelly Iko of The Athletic. With the Rockets in rebuild mode, it's somewhat surprising, considering the 33-year-old Gordon is owed $19.6 million in guaranteed salary next season and is signed for $20.9 million in 2023-24 (although that season's salary is non-guaranteed).

Jerami Grant has been one of the most popular names bandied about in trade rumors over the last few weeks, but James L. Edwards III of The Athletic writes that there is a "real possibility" that Pistons sit tight over the next few weeks. General manager Troy Weaver is reportedly comfortable holding onto Grant and dangling him in trade talks over the summer if they don't get an offer that knocks their socks off before the February 10 deadline.

The Thunder are currently riding a six-game losing streak and have posted a 1-11 record in the 12 games they've played since the calendar flipped to 2022.

Jalen Suggs is struggling with his efficiency (shooting just 36.5% from the floor and 22.4% from downtown this season), but he's coming the most productive week of his rookie campaign. Over Orlando's last three games, Suggs is averaging 17.0 points. 7.0 assists, 6.0 boards and 2.0 steals. Marc Stein wrote Monday that the Magic are looking to trade Terrence Ross and/or Gary Harris before next month's trade deadline.