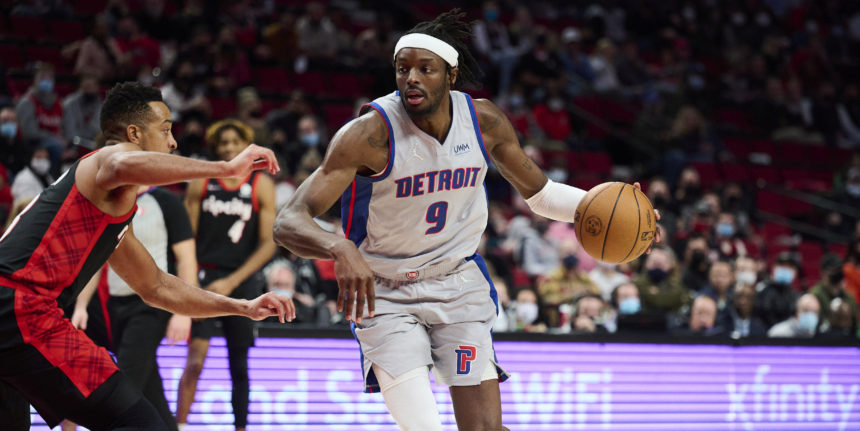 Report: Wizards are front-runner for Jerami Grant, may deal Dinwiddie

The NBA trade deadline is just 17 days away. Around the league, trade talks are heating up and some of the same names continue to surface.

One such name is Jerami Grant of the Detroit Pistons.

As Feb. 10 rapidly approaches, plenty of teams have reportedly been linked to the 27-year-old, including the Washington Wizards, New York Knicks, Portland Trail Blazers, Los Angeles Lakers and Dallas Mavericks among others.

Washington definitely seems like a team to watch in the Grant sweepstakes. Bleacher Report’s Eric Pincus reports that rival executives “believe the Wizards are leading the chase” for Grant.

“Some also say the Wizards are open to dealing veteran point guard Spencer Dinwiddie, who hasn't quite meshed with [Bradley] Beal,” Pincus writes.

Deni Avdija, Montrezl Harrell and Rui Hachimura were mentioned by Pincus as pieces that might interest Detroit. Also, he notes that the Pistons may be looking to move Kelly Olynyk (either as part of a Grant trade or in a separate deal).

Pincus also names the Mavericks as a “dark-horse team” for Grant. Jalen Brunson, Dorian Finney-Smith and Dwight Powell have been mentioned as Dallas’ best trade chips (although it would likely take quite a bit for them to move Brunson, who’s in the midst of a career-year).

The Mavs have been very active in recent weeks, as they have now been linked to Grant, Atlanta’s John Collins, Indiana’s Myles Turner and Boston’s Marcus Smart among others.

Interestingly, "the offers aren't pouring in right now" for Grant, according to The Athletic's James Edwards III. There have been plenty of conversations and talks will likely pick up steam over the next two weeks, but "not many formal offers have been placed in front of Detroit" as of yet, per Edwards.

Edwards listed Chicago's Patrick Williams and Atlanta's John Collins as potential returns that would intrigue the Pistons, but he also stressed that Detroit could very well keep Grant past the deadline.

Remember, Grant was also popping up in trade rumors around this time last year, but the Pistons ultimately decided to hold onto him. If Detroit isn't thrilled with the offers it ultimately receives, the team could do the same thing this time around.

"Furthermore, don’t be surprised if Grant doesn’t get traded by the Feb. 10 deadline," Edwards writes. "The Pistons don’t have to trade Grant right now, especially if a deal that doesn’t clearly benefit their future doesn’t come along. Detroit could just elect to wait until the offseason to make a move, which I think is a real possibility."

It remains to be seen what the Pistons will do with Grant, who has been sidelined due to a thumb injury that required surgery in late December. He just spent a week practicing with Detroit's G League affiliate, the Motor City Cruise, which suggests he may be able to return prior to the trade deadline.

What makes Grant such an interesting trade candidate is the fact that he can fit with a variety of teams — from contenders to up-and-coming squads. After emerging as a key contributor on the third-seeded Denver Nuggets in 2019-20, he proved that he can take on increased responsibilities in Detroit. Over the last year-and-a-half with the Pistons, Grant has averaged 21.6 points, 4.7 rebounds, 2.7 assists, 2.0 threes and 1.1 blocks on .425/.344/847 shooting splits.

MORE:
NBA News

Myles Turner could have path to Hornets due to foot injury
Lakers shopping Talen Horton-Tucker, Kendrick Nunn: 'No one is biting'
