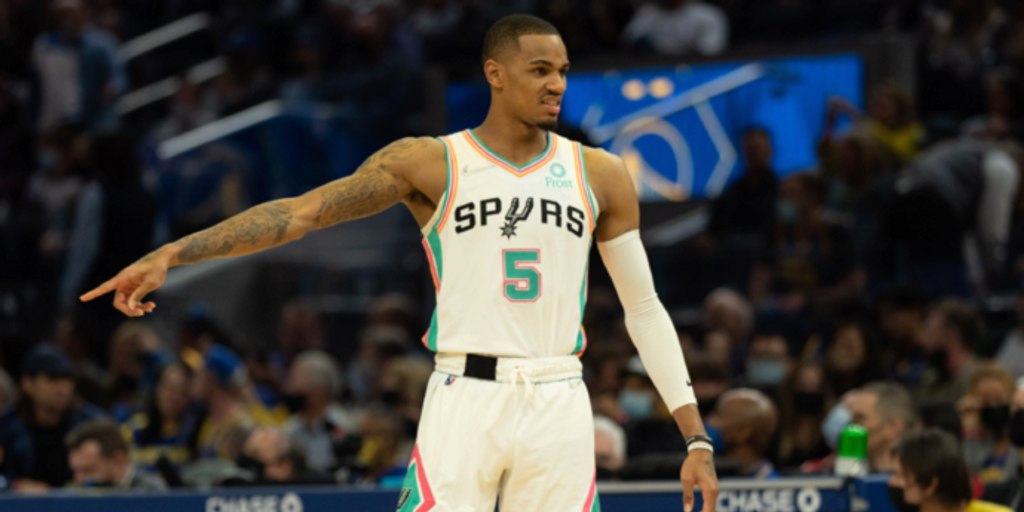 The San Antonio Spurs have not housed an All-Star since the 2018-19 season when LaMarcus Aldridge earned his seventh and final nomination. In fact, entering this season, the Spurs were the only NBA team in the league without a single former All-Star on their roster.

This three-year drought could finally be coming to a close, however, thanks to the spectacular play of one Dejounte Murray. While other breakout star guards like Ja Morant, Fred VanVleet, and Darius Garland have all become social media darlings (rightfully so), Murray’s career year seems to be slipping under the radar. But I’m here to tell you: Dejounte Murray deserves your attention, and the case for his first-ever All-Star nomination may be stronger than you think.

To be clear, I’m talking about Murray's knack for event creation on both sides of the ball.

On offense, I’ll be the first to tell you he’s a clear notch below the elite shot-composers. He doesn’t get many layup assists (-1 relative layup assist percentage). He’s late on, or outright misses, some lay-down passes. And during my entire film study (roughly 750 possessions), I’ve yet to witness him attempt a single skip pass.

However, the beauty of Murray’s game is that he’s well aware of his shortfalls as an offensive playmaker, and to compensate, he’s mastered two very important passes.

And the kick-out to a three-point shooter.

As is the case with all great offensive initiators, Murray’s facilitation abilities augment the rest of his teammates. According to Cleaning the Glass, the Spurs as a team experience a 4% increase in Effective Field Goal percentage (93rd percentile) when Murray’s on the floor, despite he himself being a below-average shooter efficiency-wise.

Additionally, his discipline as a passer beams out in his sub-10% turnover rate (84th percentile), which is a major reason why the Spurs rank No. 1 in the league in that category (one of Dean Oliver’s famous Four Factors).

Normally, I’m partial to high-turnover passers who take risks to bend defenses. But in this case, I think Murray’s ability to provide a steadying presence to a young team has been crucial to San Antonio's offense not folding in itself this season.

Defensively, Murray’s creation is more of the chaos-inducing variety. He’s in the 89th percentile in steal percentage (fourth year in a row that he’s in the 80th percentile or higher), and it’s because he does a great job of deploying his pterodactyl-like wingspan to nuke possessions — both on and off the ball.

Daniel Bratulić (great Twitter follow, by the way) charted “On-ball steals per Game” and “Passes Intercepted Per Game” for the best thieves in basketball, and what do you know? Murray excels in both manners of hardwood robbery.

Here is a breakdown of how top stealers in the game get their steals.

Some are better at pickpocketing the ball handlers (Thybulle, CP3), some are better while playing off the ball (OG, Haliburton) and some excel at both (Murray, Ball, Caruso, Smart, Butler) pic.twitter.com/J4Bx58nxWY

Other than the diversity of his pickpocketing portfolio (admit it, that’s fun to say), one thing you probably noticed is that many of his pilfers result in “pick-sixes,” which... transitions.... us perfectly into the next portion of his All-Star argument.

The reason Murray's playmaking on defense is so valuable isn’t solely because it helps end the opposing team’s offensive possessions prematurely. It also ignites the most efficient form of offense in the game: the fastbreak.

This season, Murray is averaging 1.27 points per possession (79th percentile) on nearly three transition possessions per game. (For some context, that efficiency is on-par with one of the game’s most explosive players in Anthony Edwards.)

Murray’s fastbreak ferocity isn’t limited to plays off of steals. He’s prone to hit turbo after defensive possessions that result in him corralling a rebound (7.5 defensive boards per 75 possessions).

The Spurs as a team are scoring nearly three more points in transition per 100 possessions with Murray on the floor (94th percentile). Overall, San Antonio ranks in the top-10 in the league in points per possession on transition plays — in large part thanks to Murray’s stewardship in this department.

While the Mid-Range King left the Lone Star State this past offseason, it appears a worthy heir has risen to take his place on the throne. So far this year, Murray is shooting more mid-range shots per game than he ever has, all while maintaining efficiency similar to his previous seasons:

* Data provided by Cleaning the Glass

As last year’s playoffs taught us, in a world where everyone is trying to stop threes and layups, having someone who can burn defenses with the middie is a useful trump card to have in your back pocket.

Murray’s proficiency from no man’s land also opens up driving lanes for him. As someone who runs a ton of pick and rolls (one of seven players who runs at least 10 per game), big men could theoretically sink into a drop against him because of his poor three-point shooting. However, because of his gravity in the mid-range, defenders often have to come up on the level of the screen, which gives him a chance to maneuver himself right past them.

Murray is currently averaging a career-high 65% on shots at the rim (82nd percentile) while also averaging more drives per game than he has for his entire career. The massive attacking volume (No. 6 in the NBA in drives per game) that his mid-range shooting enables him to carry makes him the kind of offensive player a team can lean on in the postseason (see Donovan Mitchell). Those types of players generally warrant serious All-Star consideration.

The other day, Andy Bailey put out a tweet ranking NBA players based on their average rankings in 10 catch-all metrics:

If you sort every NBA player with 400+ minutes by the AVERAGE OF THEIR RANKS in 10 catch-alls (Box Plus/Minus, RAPTOR, Estimated Plus-Minus, LEBRON and Game Score per 36 minutes, as well as the cumulative versions of each), this is the top 30... pic.twitter.com/Og4CguGtk3

Murray had the 16th-highest average score in the league, which by that measure would not only make him an All-Star caliber player, but a solid contender for an All-NBA spot this season.

Now, I’m by no means saying that Murray definitely deserves to be an All-Star (nor that he should be in the discussion for All-NBA); Murray certainly has his flaws as a candidate — poor foul-drawing rates, below-average efficiency and questionable rebounding value (poor contested defensive rebounding rates). Plus, there has just been too much great guard play this season to the point where somebody has to be left on the outside looking in.

All I’m saying is, when you factor in his high placement in widely-cited, catch-all metrics with the arguments I’ve laid out for you here, Dejounte Murray’s got a case for All-Star consideration.

And you know what, it’s a pretty darn good one.

Looking to go to the hottest concerts, sports, theater and family shows near you? Get 100% guaranteed tickets to more than 125,000 live events from TicketSmarter, the official ticket marketplace of BasketballNews.com. Order online now!