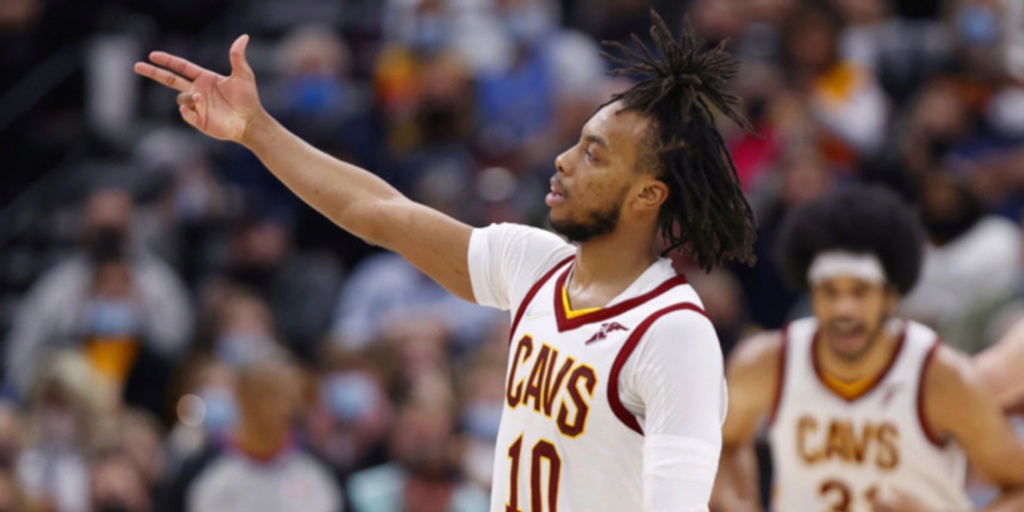 Devin Booker put on a show Monday night, pouring in a season-high 48 points to go along with 6 rebounds, 5 assists, 3 steals and bo turnovers in the Suns' victory over the San Antonio Spurs. It was Phoenix's fifth straight victory on the road and the team's 34th overall win this season — three more than any other team in the league.

Memphis had its 11-game winning streak snapped Friday by the Dallas Mavericks, but got right back in the win column Sunday courtesy of a dominant victory over the Chicago Bulls. Ja Morant had 25 for the Grizz, as did Desmond Bane. While Morant has been lavished with praise nationwide, it seems Bane continues to fly under the radar. But, make no mistake, he's been crucial to Memphis' recent success. Over the team's last 15 games, Bane is averaging 20.9 points, 4.7 boards, 3.5 made treys (on 44.5% shooting) and 1.4 steals.

Dealing with a myriad of injuries, the Warriors have hit a rough patch and have lost 3 of their last 4 games. Golden State announced Sunday that Draymond Green will miss at least the next two weeks due to left calf tightness and a lower back ailment. Stephen Curry was unable to play Sunday after injuring his right hand Friday night. However, Steph only experienced minor soreness and is expected to play Tuesday against the Detroit Pistons.

The Heat, who have been winning even while missing some of their key starters, welcomed back Bam Adebayo in Monday's win over the Raptors. Bam, who had missed 22 games due to a thumb injury, registered 14 points, 9 rebounds and 2 assists in 32 minutes. "You can see his energy out there," Miami coach Erik Spoelstra said of Adebayo after the game. "He makes us different." Another player that makes the Heat different is Jimmy Butler, who finished with 19 points, 10 assists and 10 rebounds on Monday. It was his ninth triple-double as a member of the Heat.

The Bulls were forced to play without Zach LaVine (left knee), Lonzo Ball (left knee soreness) and Alex Caruso (foot, conditioning) in Sunday's loss at Memphis. Fortunately, head coach Billy Donovan said that Caruso would practice both Monday and Tuesday, and that Chicago coaches and doctors would then decide if he is ready to return. Donovan also noted that Ball flew back to Chicago to have the knee looked at by a specialist.

Darius Garland was named the Eastern Conference Player of the Week after leading the Cavs to an NBA-best 4-0 record last week (with all four victories on the road against Western Conference opponents) while averaging 20.5 points, 6.0 rebounds and 12.8 assists. As an encore, Garland racked up 22 points, 12 assists, 6 rebounds and 2 steals in Monday's 114-107 win over the Nets.

Utah's loss to the Lakers on Monday night in Los Angeles was the Jazz's fifth defeat in their last six games. Fortunately for Utah, they return home Wednesday to take on the Houston Rockets and then have another winnable home game Friday, when they host the Pistons.

The Bucks have surprisingly dropped 4 of their last 5 games, including a disappointing loss to the struggling Atlanta Hawks on Monday, in which Milwaukee blew an 11-point lead with less than nine minutes to play. Jrue Holiday has missed each of these five contests due to left ankle soreness.

Kevin Durant injured his knee in the second quarter of Saturday's victory over the New Orleans Pelicans. KD underwent an MRI on Sunday and was diagnosed with a sprained left medial collateral ligament (MCL). The team announced Durant is "expected to return to full strength after a period of rehabilitation." According to ESPN's Adrian Wojnarowski, there is "optimism within the organization" that KD will be able to return to action after a 4-to-6-week rehab period. Kyrie Irving stepped up and delivered 27 points, 9 assists and 7 rebounds on Monday in Cleveland, but Brooklyn still lost to the Cavaliers.

In Monday's victory over the Oklahoma City Thunder, Luka Doncic had 20 points, 12 assists, 11 rebounds, 3 steals and 3 blocks. It was the 41st triple-double of his short career, which is one more than the other 349 players who have ever played for the Mavericks combined.

The Sixers had won 9 of 10 before getting buzzed by the Washington Wizards in D.C. on Monday afternoon. Philly was playing without defensive specialist Matisse Thybulle; the team announced Sunday that Thybulle underwent an MRI, which revealed a sprained right shoulder. He'll miss at least one week.

LaMelo Ball was unable to play on Monday vs. the New York Knicks, but with Miles Bridges lighting up the 'Bockers, Charlotte didn't need its young point guard. Bridges had just one point less (22) than the entire Knicks team in the first quarter. He finished with a career-high 38 points to go along with 12 rebounds, 5 assists, 5 triples, a steal, a block and just one turnover. Bridges is the sixth player this season to record a career-high against the Knicks at Madison Square Garden.

Nikola Jokic once again did all he could Sunday night vs. the Jazz, registering a 25-point, 15-rebound, 14-assist triple-double, but it wasn't enough to push the Nuggets past Utah. It was his ninth trip-dub this season (tying him with Russell Westbrook for the league lead) and the 66th of his career.

Despite Monday's loss to the Heat, the Raptors have reached the season's midpoint with a 21-20 record. It's the eighth time in the last nine years they have had a winning record halfway through the season. The only exception was last season, when they were forced to play all their "home" games in Tampa.

Despite falling behind by 18 points in the first half to New Orleans on Monday afternoon, the Celts came all the way back to beat the Pels by 12. Jayson Tatum led the way for Boston, scoring 21 of his 27 points in the second half. It was the Cs' fifth win in their last six games.

Karl-Anthony Towns takes it STRONG to the rack 💪pic.twitter.com/EsFMiFNZHl

After beating up on the shorthanded Warriors Sunday night (thanks to a 26-point, 11-rebound double-double courtesy of Karl-Anthony Towns), the Wolves have won 5 of their last 7 games. However, they head to New York on Tuesday and are in the middle of a stretch where they play 12 of 15 games on the road.

Frank Vogel was coaching for his job on Monday vs. Utah, according to Bill Oram and Sam Amick of The Athletic, who reported that Vogel "narrowly avoided being fired" after the Lakers' embarrassing 37-point loss to Denver over the weekend. The Lakers beat the Jazz, but it sounds like the team's head coach is most certainly on the hot seat.

The Clippers got a much-needed victory Monday over the Indiana Pacers thanks to a surprising, season-high 32-point explosion from Nicolas Batum (who scored all 32 of his points after halftime) and 26 points from Reggie Jackson. Remarkably, that was the Clippers' last home game until Feb. 3. L.A. will begin a brutal eight-game road trip Wednesday night in Denver.

With the Knicks riding a three-game win streak, the N.Y. fanbase was excited coming into Monday's matinee matchup with the Hornets. However, the Knicks crashed back down to earth, as the Hornets blew them out of the building. Still, the Knicks getting beat by a better team shouldn't be shocking. Of the Knicks' last 11 wins, 10 have come against opponents with losing records.

Heading into Monday's game vs. Milwaukee, the Hawks hadn't won at home since Nov. 22. Atlanta was able to snap its 10-game home losing skid in impressive fashion, knocking off the defending champs, despite playing without starters Bogdan Bogdanovic (sore right knee) and Clint Capela (sprained left ankle). Onyeka Okongwu stepped in and stepped up for the Hawks, tallying 12 points, 8 rebounds and 3 blocks on Monday.

The Blazers finally welcomed back CJ McCollum to the lineup on Monday after their star shooting guard missed six weeks of action due to a collapsed lung (and the birth of his son). McCollum logged 26 minutes in Portland's victory over the Orlando Magic, racking up 16 points, 2 assists and a rebound. Despite being seven games under .500, the Blazers have a two-game lead over the Sacramento Kings for the 10th seed in the Western Conference.

Tyrese Haliburton, who had been playing at a remarkably high level of late, entered the league's health and safety protocols over the weekend and could not play Sunday vs. Houston. Marvin Bagley (right shoulder soreness) was also ruled out. Richaun Holmes (protocols/conditioning) did return to action after an eight-game absence, but logged just 15 minutes in the Kings' loss to the Rockets.

Jakob Poeltl played one of his best all-around games of the season in Monday's loss to the Suns, tallying 23 points (on 9 of 12 shooting), 14 rebounds, 4 assists and 2 blocks in 30 minutes. Over the Spurs' last 12 games, 'Jak is averaging 13.0 points, 10.7 rebounds and 1.5 blocks. The Spurs may also get big man Zach Collins (left foot) back by the end of this month. On Monday, Collins tallied 8 points and 3 blocks in 19 minutes in his 2021-22 G League debut with Austin.

The Pels had won two in a row at home before getting beat in Brooklyn on Saturday and falling to Boston in Beantown on Monday. New Orleans will close out its three-game East Coast road trip Thursday vs. the Knicks at MSG.

Myles Turner sat out Monday due to a sore left ankle and was joined on the sidelines by Malcolm Brogdon (sore right Achilles tendon) and Jeremy Lamb (sore left knee). Earlier Monday, it was reported that the Pacers "are seeking two first-round picks or a promising young player and a first-round pick" in exchange for Turner. However, the team announced Tuesday that Turner is dealing with a stress reaction in his foot, which will sideline him for at least two weeks. With Indiana now 14 games below .500, it seems safe to assume the organization will make a significant move before the trade deadline next month.

OKC has outscored its opponents by a total of 6 points over their past five games. However, the Thunder are just 1-4 in those five contests, as their one win was a 21-point blowout of the Nets, while their four losses were by 4, 4, 5 and 2 points, respectively.

Christian Wood had another solid performance in Houston's victory over the Kings on Sunday, tallying 23 points, 14 rebounds, 3 assists, 3 triples and 2 steals. After a minor midseason slump, Wood has posted impressive numbers in 2022. Over the Rockets' last seven games, he is averaging 21.4 points, 8.7 boards, 2.1 treys and 1.6 steals, while shooting 54% from the floor and 41.7% from downtown.

The Pistons registered their two most impressive wins of the season last week, beating the Jazz by double-digits and then romping the Raptors, 103-87. Over the four games Detroit played last week, rookie sensation Cade Cunningham averaged 19.0 points, 5.0 assists and 2.3 triples, while shooting 51.7% from the floor, 42.9% from behind the arc and 87.5% from the charity stripe.

Orlando has lost 12 of its last 13 games, including eight in a row at home. It's been more than six weeks since the Magic won a game at Amway Center. Encouragingly, Jalen Suggs has been more efficient offensively since returning from a thumb injury. Over the Magic's past three games, the rookie guard is averaging 12.7 points, 5.0 boards and 4.0 dimes while shooting 58.6% from the floor.