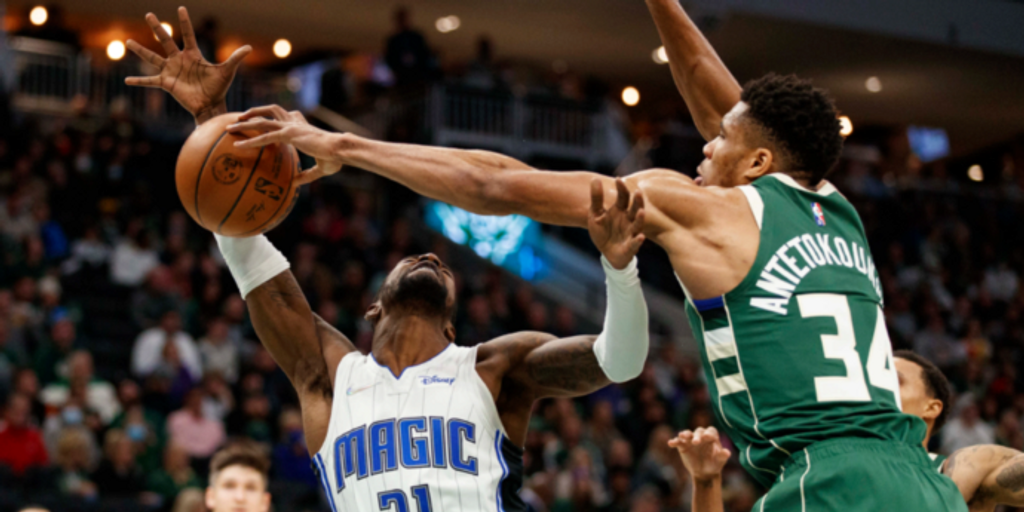 (Are you even online, watching television, having conversations with friends, if you aren't being bombarded with "Player X is the obvious, no-questions-asked MVP" arguments?)

I won't act like I'm above the awards talk — The Dunker Spot will be having an awards episode later this week — but this also seems like a good time to go off the beaten path since everyone's talking about the major awards.

Basketball is a simple game in its own right, but it is ruled by microskills. Wins and losses are decided by which teams — which players — can fill their roles the best. It would only make sense, then, to dig deeper and highlight players who are excelling within those roles.

With that in mind, I elicited the help of resident smart guys Jackson Frank and Mark Schindler to hand out some skill-specific awards. Before digging in, let's do some housekeeping.

Now, let's hand out some awards.

I'll never forget Caitlin Cooper's article on Domas Sabonis' screening back in 2019. To that point, it was one of the first — if not the first — deep dive I've seen on someone's screening.

She touched on the sheer volume of screens Sabonis set; his sense of flipping the angle on screens to pry ball-handlers open. Knowing when to slip if defenses went with more aggressive coverages. Those astute observations remain true roughly three years later.

Sabonis is more of a revolving door than a brick wall, but his ability to do both at a high level is what earns him this distinction. He only ranks third in screen assists (5.5) this season, though he's led the NBA in each of the past two seasons.

It's worth pointing out the prowess of Rudy Gobert, who leads the NBA in screen assists (6.4). He's long been an underrated linchpin of Utah's offensive success. Heck, it feels like he's the reason screen assists have become part of the non-casual fan's vernacular.

Nobody has set more on-ball picks than Nikola Vucevic (3,167) this season, per Second Spectrum. His work with freeing Zach LaVine and DeMar DeRozan has been invaluable, especially at the end of games.

If you're a fan of bone-crushing screens, look no further than Steven Adams and Bam Adebayo. Second Spectrum tracks the percentage of screens that a defender "dies on"; it should come as no surprise that Adams leads the NBA by a solid margin (5.7%) among high-volume screeners, while Adebayo ranks third (3.9%). Quick hat tip to Kevon Looney (4.7%) for being sandwiched between those two; he deserves more love.

The NBA is a pick-and-roll game. With the heightened emphasis on spacing and three-point shooting (linked, but not the same thing), elite ball-handlers have more room to operate. Add in the fluctuating scale of physicality allowed from defenders, and it's pretty darn hard to contain people.

The fact that Herb Jones, a second-round draft pick, is already among the NBA's elite defenders is flat-out insane. You simply can't keep this guy out of a play unless you have a crowbar present.

He does a phenomenal job of staying attached to ball-handlers. He's able to re-connect if he's bumped on screens, but also has the length to duck under picks and offer strong contests anyway.

If you want a number, let's go back to the die-on-screen percentage. Among 28 players who have faced at least 1,000 picks this season, only Desmond Bane (0.6%) has been washed out less frequently than Jones (0.9%).

There's some context needed. Players in heavy switching schemes will naturally have a lower percentage than those who have to fight over screens while their big drops back. Even if you filter only for the screens being fought over, Jones has a top-five mark among high-volume defenders (minimum 300 picks fought over), per Second Spectrum.

Now, factor in Jones getting the opposing team's best perimeter option; because of that, Jones defends more picks per 100 possessions (29.7) than Bane does (22.4). He should be getting legit All-Defense love.

The same could be said for Alex Caruso before injuries derailed his season. During the Bulls' run as the East's top seed, Caruso set the table with his gnarly defense at the point of attack.

Mikal Bridges likely will make an All-Defensive team this year for his work. He doesn't miss games, he plays high minutes and he relishes the matchups he's tasked with.

There may not be a better point-of-attack defender than Gary Payton II on a per-possession basis, though he gets dinged a bit for his lack of workload.

Here's a minute's worth of help rotations from Giannis this year. Hit me up on Twitter (@NekiasNBA) and let me know which clip is the one that makes you laugh, because it will absolutely happen.

It remains wild to me that this can be considered a down year for Giannis, and he's still been one of the most destructive forces in basketball. He's had to toggle more roles this year with the extended absence of Brook Lopez. When tasked with being an off-ball roamer — his best role — he's been able to blow things up.

The same can be said for Robert Williams III (get well soon!), whose deployment on weak shooters has unlocked his prowess as a shot-blocker. That hack has been a pretty big part of Boston's elite defense.

It feels like some of the shine is wearing off of Evan Mobley's campaign. He's been more of an anchor than helper since Jarrett Allen has gone down; don't sleep on what he's been able to do in the helper role though. His unique blend of size, length, mobility and discipline has allowed him to shut things down. Whether he's rotating from the weak side or causing havoc as part of the zone, he's already one of the most feared defenders in the league.

Kudos are in order for the work Draymond Green and Marcus Smart put in. They are two of the best communicators in the NBA, able to call out opposing sets and direct switches to flatten out actions. Neither are traditional weak-side rim-protectors, but Green wins with his positioning and verticality while Smart takes charges like he doesn't give a single [expletive] about his well-being.

In normal circumstances, I'd call Jokic a basketball computer due to his ability to map the floor and make great decisions on a whim. In light of the banter around the MVP conversation, it's probably best to keep Jokic and "computer" out of the same sentence.

With no Jamal Murray, you don't see Denver ball-handlers get all-out trapped too often. But on the occasions that Jokic is able to face a 4-on-3, 3-on-2 or 2-on-1, the inevitablitity pops out. What do you with a player with Jokic's passing chops and intermediate scoring ability?

You pray. That's what you do.

His MVP-candidate counterpart in Joel Embiid doesn't exhibit the same skill as a passer, but he brings the funk as a scorer. Whether it's bullying smaller defenders at the rim, or slowing things down to sprinkle in pull-up jumpers, scrambling defenses don't have much of a shot.

Deandre Ayton has made real strides as a scorer in these situations. If we want to talk about intermediate scoring, you have to shine line on his career-high 59.0% clip on shots between 3 to 10 feet.

And then, there's Dwight Powell. He's generating well over 1.2 points per possession when shooting or passing out of a trapped ball-screen, a number sandwiched between Jokic and Embiid. He's long been one of the NBA's underrated roll men; his improvements as a passer have nearly made trapping Luka-led pick-and-rolls untenable.

Speaking of Luka, he narrowly edged out our candidates as the NBA's best driver. It's become commonplace to describe a lead ball-handler as one that plays at their own pace — oddly enough, sub-elite athletes seem to make up 100% of the list of those players. But Luka really does.

He doesn't blow past you; he freakin' bodies you while going 6 miles per hour, then contorts his body for rim finishes or dimes to open teammates.

If Luka's style isn't your speed, I'd once again like to present Shai Gilgeous-Alexander as the NBA's funkiest driver. Differing stride lengths, off-foot gathers, quicker-than-usual scoop shots against unsuspecting defenders. He's got the juice, man.

SGA's got the stats, too. He leads the NBA in drives and free-throw attempts drawn, and boasts a comically low turnover rate despite passing at a higher rate than Trae Young.

And then there's Ja Morant, who glides through the air like he belongs there. He's the NBA's leader in paint points for a reason.

Three unique talents with contrasting driving styles. You truly love to see it.

While we're on Trae Young, there's nobody in the league doing what he's doing right now. He may just join Nate "Tiny" Archibald as the second player to lead the NBA in total points and assists. And to the latter point, he gets the "best passer" tag for being able to make every read in the book while being my size.

Teams are geared to defend Young. They throw size on him. They trap him. They pre-rotate to take away his common reads, and yet, he counters all of your counters. He's the NBA's premier lob-thrower while being a skip-pass savant. He doesn't need to see over your defense because he already knows where everyone is.

If you do enjoy the advantage of looking over the top of defenders, it's hard to argue against Luka Doncic. There really isn't a coverage you can play that prevents him from dotting you up. A growing favorite: watching Doncic get trapped, only for him to casually string it out before tossing a dart.

I'm not sure there's much more to be said about Nikola Jokic at this point. Between his long distance hookups after boards and preternatural sense for finding cutters, it's been time to discuss where he ranks among the top passers of all-time, period. He's top five in my book, and that's probably conservative.

Oh, right, Chris Paul is leading the NBA in assists without really turning the ball over. Another year in the office.

I could bore you with the numbers, like him being one of four non-bigs to rank in the top 15 of total dunks (13th, 116). But honestly, just look at what this dude does with a runway. It's skillful violence.

The combination of power and pretty (he has some fire windmills in his film) gives him the edge over the inevitability of Giannis (third, 174) and Jarrett Allen (fourth, 164), as well as the suddenness of KJ Martin (15th, 111) and Obi Toppin (23rd, 93).