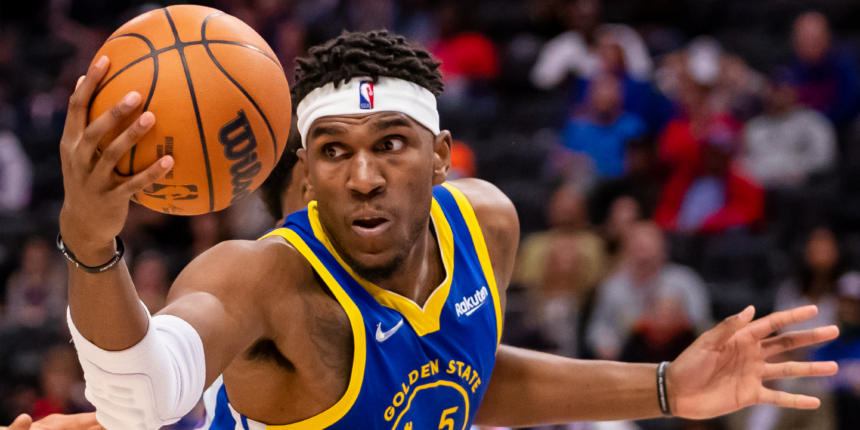 It's easy to lose track of Kevon Looney in Golden State.

Stephen Curry is likely the MVP frontrunner right now. His intersection of movement, spatial awareness and shooting versability — versatility + ability — is unlike anything we've ever seen.

Draymond Green may be the front-runner for Defensive Player of the Year right now. When talking about processing speed, it's likely brought up on the offensive end. How quickly a player can map out where his teammates are. How quickly they react to movement and opposing shifts and how quickly they can solve the problem(s) ahead of them. Green does that defensively: putting out fires with timely rotations, or preventing them altogether with communication.

Jordan Poole and Andrew Wiggins, tasked with carrying non-Curry scoring loads, have both taken leaps in terms of aggression and comfort. Poole can — and will — pull-up from anywhere and has grown as a finisher; Wiggins is getting downhill more consistently, and with more verve.

And then there's Looney, quietly trucking along. His lone statistical per-game relevance is the career-high in rebounds (6.9) he's inhaling in 18-ish minutes a night.

Everything else is nondescript. Looney's shots have never come closer at the rim (average shot distance of 3.9 feet), though his rim percentage has never been lower (59.1%). He hasn't taken a three this season. He doesn't average a block. From the box score, or the highlight reel, you never really notice Looney.

And that, my friends, is precisely his value.

Despite being a non-spacer, and a moderate-at-best threat as a pick-and-roll or handoff partner, Looney is never in the way. He doesn't clash with Green, another non-shooter.

Green gets more praise for his work with Curry; his short-roll playmaking is the stuff of legends. But Looney's chemestry with Curry shouldn't be overlooked. His screens are angled near-perfectly, the timing held just long enough to wash defenders out.

And the mind-meld he has when Curry is in relocation mode is a joy to watch, subtle as it may be.

Here's a fun one for you: Over the past four seasons, the Warriors' offensive rating has been nearly five points better with Curry sharing the floor with Looney than without him. Curry has converted 42.2% of his threes with or without Looney during that same stretch.

That's a feat in and of itself once you consider Looney-less minutes are likely of the small-ball variety; in theory, the spacing should better, thus making it more difficult to contain Curry (and everyone else).

Defensively, the "don't notice him" ethos also fits Looney. While not a menacing rim-protector, he's positionally sound. His feet are nimble enough to execute a multitude of coverages.

He holds his own in drop coverage. When asked to come to the level of the screen or higher, Looney is able to angle himself in a way to cut off driving lanes; the pause he forces at the point of attack allows his teammates to rotate and position themselves behind him.

Looney may not have the aesthetic of a switch big, but he's adept at shading ball-handlers a certain way and forcing them to beat him his way.

This is not to say Looney is elite on that end. His footspeed only goes so far; the quickest of ball-handlers can attack his top foot and force him into recovery mode. The lack of vertical pop shines through when defending premier roll men; the backpedal-and-leap strategy doesn't work entirely well for him.

The way I'd describe it: Looney is a "B-" or so in every defensive scheme. Within the context of what the Warriors want to do, and the personnel they have around him, that level of "solid" across the board is inherently valuable.

Every team needs a connector. A guy willing to handle the grunt work, whose sole presence is to accentuate the talent of others. Looney has been that guy for a minute now.

Let's give him his flowers.

All praise due to the Point God: Chris Paul is at it again
yesterday
MORE:
NBA News

Nothing But Bets: NBA Projections for 11/23/21
Jalen Green voices willingness to step up as Rockets' leader
