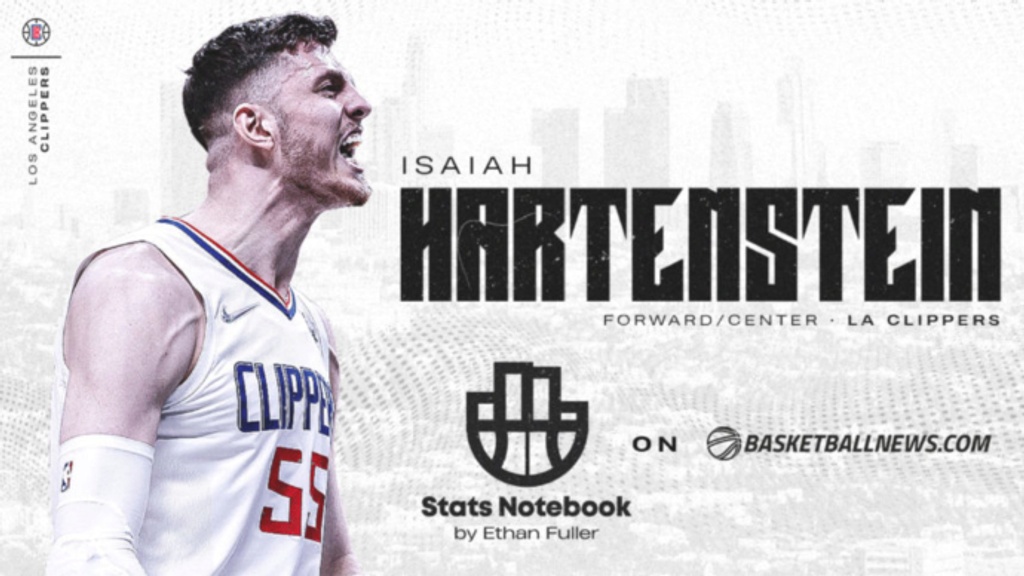 But a third name emerged from Los Angeles' win. Isaiah Hartenstein tallied 14 points, 7 rebounds and 6 assists to help fuel the comeback win and garnered several "who's-this-guy, he's-good" types of tweets from casual fans throughout the night. News flash: Hartenstein has been balling for the ragtag Clippers all season and has taken his game to another level over the last month.

The 23-year-old is averaging 10.2 points, 5.5 rebounds and 3.3 assists in 21.3 minutes per game since the All-Star break. It hasn't always equated to winning — Los Angeles is 7-8 during that time — but Hartenstein has emerged as a multifaceted contributor and one of the best backup centers in the league.

Let's start with the passing, which I can define with one word: crisp.

Hartenstein rifles basketballs to cutters. The above clip is nuts, but he does this pretty regularly. Hartenstein can operate as a QB1 at the top of the arc, out of the post or at the elbow. In fact, he sports a 22.2% assist rate from the elbow, good for third among the 20 players with at least 200 elbow touches this season.

Then, he turns around and displays some impressive processing speed when he rolls or cuts. Hartenstein has great hands and solid body control for a seven-foot center and, coupled with his vision, can find passing lanes many bigs might not see.

Hartenstein has an elite 18.5% assist rate that ranks in the 92nd percentile among all bigs this season. Since the All-Star break, that has soared up to 24.3%. And he maximizes his passing opportunities at some of the highest big-man levels in the league.

We are talking about, for my money, one of the five best passing bigs in the NBA.

Hartenstein's court vision separates him from most centers. He's also a force around the basket as a play-finisher. Hartenstein has punched home 83% of his attempts at the rim post-All-Star break and 74% on the year, per Cleaning the Glass.

With his size and mobility, Hartenstein possesses some advantages inside. He has yet to expand his game consistently beyond the arc or even in the mid-range. However — and for those of you who have read the past two notebooks, I swear this is not supposed to be a trend — Hartenstein is lighting up the wider paint with floaters and hook shots.

Cleaning the Glass designates the zone between four feet and the free throw line as the "short mid-range." Hartenstein attempts 37% of his shots in that zone (96th percentile among centers) and is hitting on 53% of them (88th percentile). He methodically waits to strike at the right opportunities. Look at how Hartenstein circles up to an open shot on back-to-back possessions against the Jazz defense.

According to InStat Scouting, Hartenstein has canned an impressive 57.3% of his 103 floaters. Many of them look like this jumping lefty push-floater seen above. He has an impeccable sense of timing for when to circle up, and can then either use this shot or explode to the basket.

Together, Hartenstein's bag of tricks as a passer and interior scorer make him an offensive weapon even without a viable jumper. Then on defense, he blocks shots and contests the rim with proficiency.

BBall Index says that when Hartenstein is on the floor, he contests more than 47% of the opponents' shots at the rim. More than 22% of his contests become blocks; that's in the 81st percentile among all players at his position. His 10.8 rim contests per 75 possessions are in the 99th percentile among bigs.

Hartenstein's block rate (3.4%) and steal rate (1.9%) are in the 93rd and 91st big-man percentiles, respectively, per Cleaning the Glass. Only six other rotation players have cleared even 2.0% and 1.5% this season, nevermind approaching Hartenstein's rates.

Against other bigs and larger forwards, Hartenstein appears mobile. He absorbs contact with his 250-pound frame and stays engaged with his hands. The discipline isn't perfect; Hartenstein has a 5.7% foul rate, in the 14th percentile for big men. But it's a fair trade with how he can affect shots inside.

Now, this isn't to say Hartenstein is an All-Defensive candidate. The Clippers big man typically comes off the bench and faces opponents with less of an offensive role. He was fairly helpless in a recent matchup against Joel Embiid — though to be fair, aren't we all?

Hartenstein also really struggles to defend guards in space. The stats don't paint him as an overt negative, but Utah in particular attacked him in switches and beat him off the dribble. You'll see two such examples within this reel:

I would certainly label Hartenstein an "active" defender, though his size and limited foot speed hinder him in aspects of today's NBA. He's not an anchor, but there are enough valuable tools that teams can integrate into the right defensive cast.

Hartenstein is making just $1.73 million on his one-year contract with the Clippers. That should skyrocket this summer when he signs his next deal as a free agent. At base level, Hartenstein is a connector, finisher and bruiser. But if unlocked, he could be a secondary orchestrator for an offense and a valuable rim-protector on defense — an archetype modern teams covet.

The Lakers social media team got some explaining to do 😂 pic.twitter.com/sB5pNxXAFW

His 11.7% Adj. AST/Pass ratio is second among all centers only behind Jokic. That means 11.7% of his passes become assists or free throws