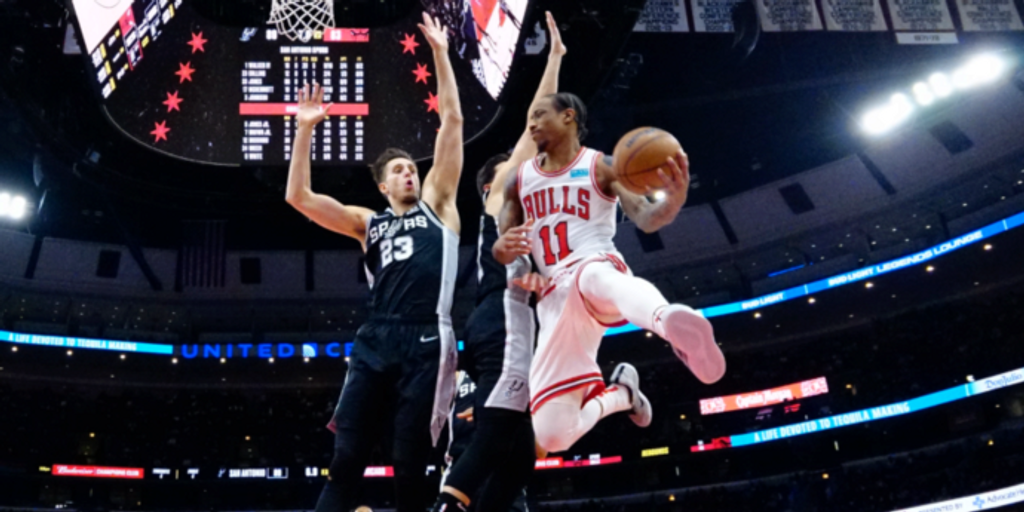 The DeMar DeRozan and Nikola Vucevic pairing has been cooking lately.

Since Jan. 1, DeRozan and Vucevic have been the NBA's most frequent ball-screen partnership, per Second Spectrum. The Chicago Bulls have scored 1.11 points per possession on trips featuring a DeRozan-Vucevic ball screen — the second-best mark among high-volume pairings.

(The Suns are getting an eye-popping 1.26 points per possession on trips featuring a Chris Paul-Deandre Ayton ball-screen. Good freakin' luck, man.)

It makes sense that the duo works. DeRozan is a downhill savant with mid-range guile that reminds you of a former Los Angeles Laker. Vucevic can get busy as a roller, a short-roller and a pick-and-pop threat. That type of versatility makes life difficult for a defense, as we saw during the Bulls' 120-109 victory over the San Antonio Spurs on Monday night.

Duck under against DeRozan, and he'll just slither his way into spots anyway. Go over a screen and commit extra attention on his drive, and Vucevic can find a lane to the rim or flare out for triples. Give too much attention to Vucevic, and DeRozan can bake single coverage.

Switch the screen, and you're in double-trouble; DeRozan is generating one point per possession on isolations against centers this season, while Vucevic is punishing guards or forwards on post-ups at roughly the same clip (1.01 PPP).

And speaking of post-ups, you typically imagine guards spacing the floor around a bruising or skillful center. Because of DeRozan's craft — and Vucevic's shooting ability — the Bulls are able to invert that look. Devote too much attention to DeRozan, and you get stuff like this:

All of that sets the stage for the late-fourth-quarter dagger. In a game where he scored 40 efficient points, it was DeRozan's seventh dime of the affair that caught my eye. I'll show it in full below, then we'll break this sucker down.

Whew. Okay. Let's get into it.

First, in light of how effective the partnership is, and how effective it had been in the game (1.57 PPP on direct hookups), it makes sense that the Bulls wanted to end this game with a DeRozan-Vucevic ball-screen.

The Spurs tried drop coverage for most of the game, particularly in the first half, and it simply didn't work. Too much space was afforded. The adjustment was to have their big — either Jakob Poeltl or Zach Collins — play "up to touch" on the screen, meaning they'd come to the level before settling into a drop.

On this possession, the Spurs are planning to do exactly that. The weak-side help is key though. With Poeltl playing this high up, the potential for Vucevic to slip through is there. Doug McDermott tasks Lonnie Walker IV with making the short-roll rotation; that leaves McDermott to split the difference — play between two defenders — on the weak side. 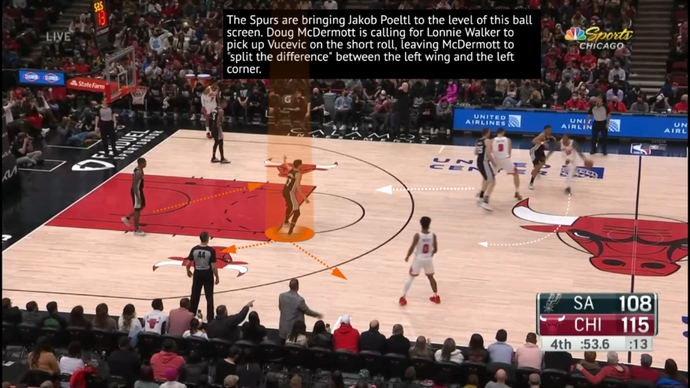 That's a lot of ground to account for, and it's especially tough to cover on the fly. That's what makes DeRozan's next move — a spin away from Vucevic's screen — so freakin' nasty. It leaves Keldon Johnson in his tracks, Poeltl on the wrong side of a screen that isn't even used, Walker IV out of position and McDermott in an impossible spot at the same time. 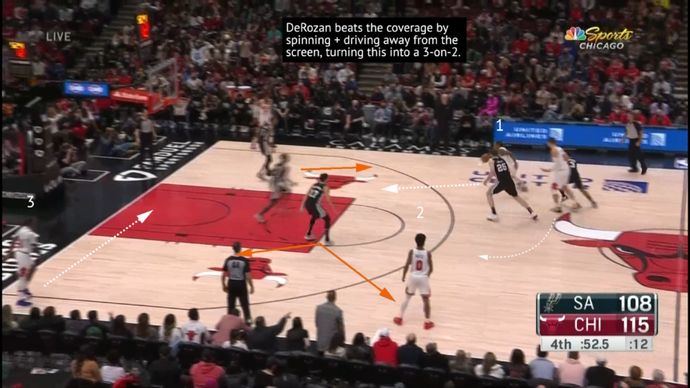 McDermott is already accounting for two guys standing at least 20 feet from each other. Once Javonte Green cuts baseline, the play is really dead. DeRozan drives, leaps in the air while staring down Green's cut to move McDermott, then fires a dart to Coby White for the open three. 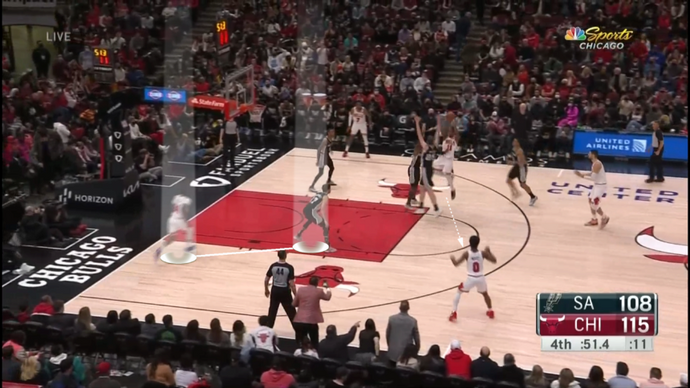 I'm not sure what you're supposed to do with that.