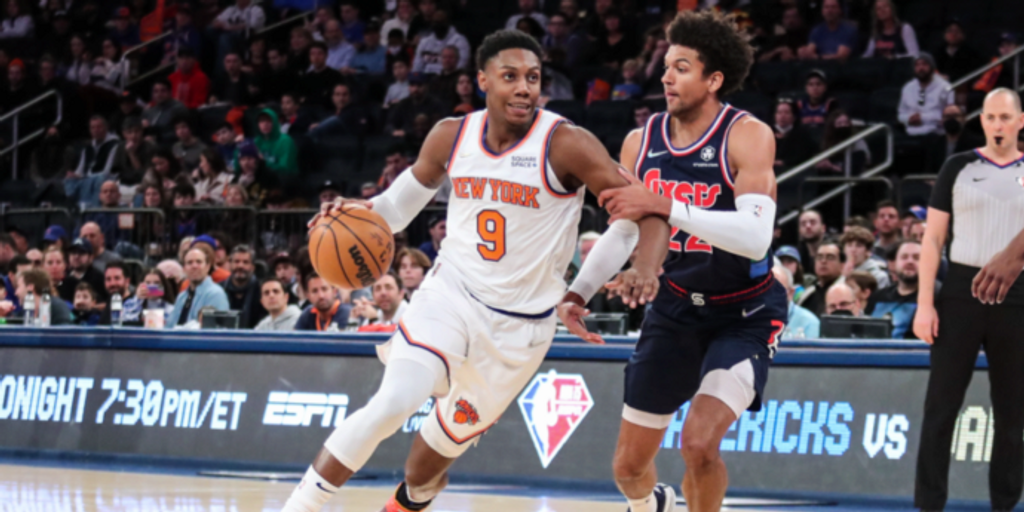 After seeing Zion Williamson, Ja Morant, and Darius Garland graduate to All-Star status — while also having to fathom Tyler Herro and Jordan Poole’s rapid ascension in the league hierarchy — it's safe to presume that RJ Barrett is dissatisfied with his standing among his peers from the 2019 NBA Draft class.

As a result, he’s decided to voice his frustrations about his ranking in the pecking order with his production.

In the month of February, Barrett's offensive tear was higher than any month of his career (albeit while only suiting up for six games), managing to surpass January's (his previous career-high for a month) while also maintaining similar efficiency across the board:

Barrett was able to increase his scoring load without experiencing a meaningful dip in efficiency, which is a great sign that he can scale his volume up without bleeding too much value in other places. And although the sample may be small, it seems reasonably sustainable when you dive deeper into the progression of his shot diet this season.

Barrett Drives Per Game (by month)* 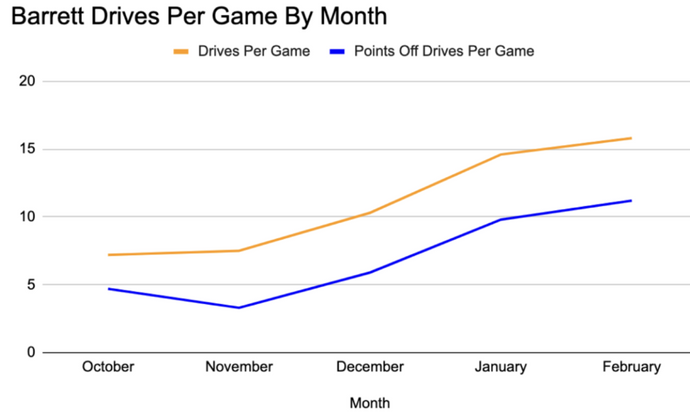 Barrett has more than doubled his number of drives per game from the start of the season to now. This upward mobility is important because it’s easier to maintain efficiency when one is living off a meal plan of high-percentage shots in the paint as opposed to less nutrient-rich outside looks.

When paying attention to his drives from this month closely, you notice that a good chunk of them come in different ways.

- Attacking mismatches in the half-court

The most impressive part of RJ's game last night was his understanding of Miami's defense. He frequently sought out favorable matchups against Robinson and Herro. Watch him ask for a Burks screen knowing Miami will switch pic.twitter.com/bZNjpqJhPj

- Getting after it in transition

RJ Barrett's growth in transition has been fun. pic.twitter.com/LWLnGH0lXD

Barrett's increase in drives per game has been accompanied by a gradual increase in free throws, which of course is another highly sustainable way to score at a higher volume while maintaining similar efficiency.

A promising sign regarding the stagnation of his three-point shooting (remember, no change is a good thing in this case) is that he’s doing it without shooting at an absurdly high rate on pull-ups (only 27.3%). High pull-up shooting percentages for non-elite shooters are incredibly difficult to maintain over long periods of time. For instance, Julius Randle shot 40% on pull-up threes last season, and now this year, he’s regressed down to a measly 29.9% (per NBA.com). So the fact that Barrett is shooting nearly 40% from downtown during his hot streak without nailing an insane amount of pull-up threes is welcome news.

What Barrett did do well during the second month of 2022 was knock down open/wide-open three-pointers efficiently (defined as shots where the closest defender is at least 4 feet away) at a season-high volume:

The beauty of this shot category is that it is typically of the catch-and-shoot variety, which usually comes with a lower degree of difficulty and a higher level of replicability than the previously discussed pull-up treys. And as long as these easy looks continue to generate themselves for Barrett (always a question with the Knicks' offense), the upward trend of his conversion rate since November indicates that he can be counted on to capitalize on these opportunities.

How to Keep Things Rolling

Heat-check months are nothing new for Barrett. In fact, in six games in October, Barrett averaged a crisp 17 points per game on nearly 60% True Shooting (per Basketball-Reference). But for these heaters to become Barrett’s new normal, systematic changes need to be made.

For starters, this can’t be a thing, literally ever:

The Knicks trailed 106 to 105 against the Sixers with 7:01 to go in the 4th. Only RJ Barrett scored in the remainder of the game.

Against Miami two days earlier, the Knicks trailed 103 to 95 with 5:33 left on the clock. Again, RJ Barrett was the only Knick to score points..

Barrett is a fine young scorer, but he’s not someone who can drive an offense on his own. Even with all his growth this season, he’s still shooting four points below the league average in True Shooting for the season (51.9%).

I already mentioned this before with Randle, but in an ideal context, you want a drink-stirring point guard mixing cocktails for Barrett like this

In that sequence, Kemba Walker begins the sequence by creating an advantage, and enables Barrett to cap it off with an exclamation-mark floater. (It also goes without saying that this version of Walker probably isn't the guard in our hypothetical ideal context.)

Barrett himself isn’t devoid of blame for the present circumstances either. During his unforgivable assault of the rim in February, he only converted on 50% of his looks (7th percentile), and for the entire season, he’s only converted 57% of those particular chances (26th percentile).

Being able to invade the paint at will is a luxury, but only coming away with points half of the time greatly neutralizes this superpower’s effect. To cure this ailment, Barrett needs to be more confident finishing with his right hand:

The above clip demonstrates this issue perfectly. Barrett’s masterful screen rejection gives him a step on the venerable Bam Adebayo. Now, all he needs to do is shield away from the ball with his left side and finish with his right. In that position, he’s guaranteed an easy bucket or free throws (if Adebayo decides to reach across his body to try and contest the shot). Either way, it’s a positive result.

Unfortunately, Barrett decides to switch to his left hand (his dominant hand) and, in the process, affords Adebayo a clean look at the ball. So instead of another bucket, Barrett gets put in the friendzone (yeah, I stole that from Mark Jones).

Even with the lackluster rim-finishing percentages, this stretch has been promising for the young forward, but there are still kinks to work out.

And RJ Barrett will need to solve that if he wants to keep pace with his rising peers and prove worthy of his high selection in the 2019 draft.