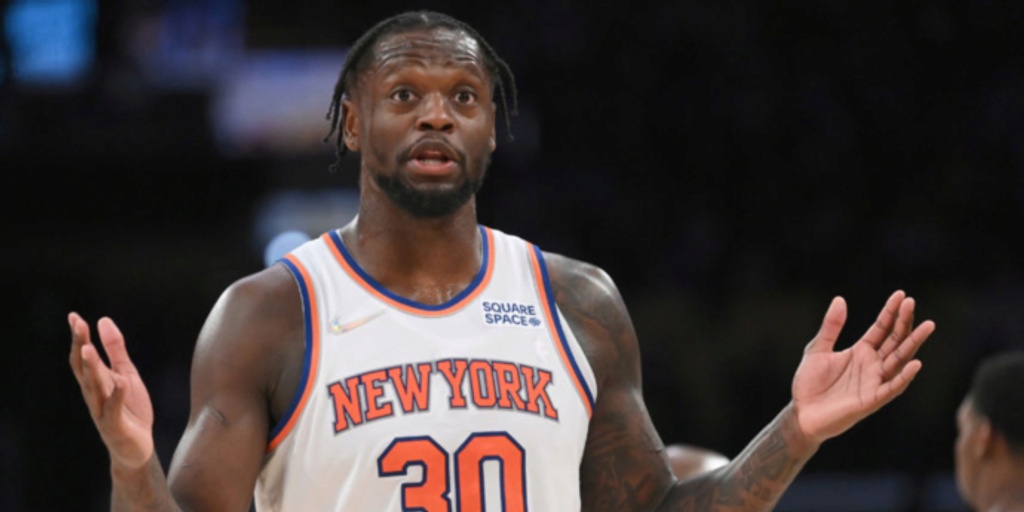 An explanation of Julius Randle and the George Costanza problem

Let me paint a picture for you. It’s a Tuesday afternoon, and I’m scarfing down a bowl full of Greek yogurt mixed with crunchy peanut butter and honey (the ultimate midday snack). I’d recently decided to get into ​​"Curb Your Enthusiasm" because that’s what all the prestige TV nerds do, so I had that on during my snacking.

At the time, I was on the first episode of Season 2, where Jason Alexander famously tells Larry David that he is having a hard time finding acting work because everyone just thinks of him as George Costanza from "Seinfeld."

“You know, the acting thing is, frankly, coming a little hard... I can’t shake this George thing. They all see me as George.”

Then — like a wrecking ball barrelling towards Miley Cyrus — it hit me. Julius Randle is dealing with the George Costanza issue. Don’t get it? Let me explain.

The talent evaluators in Hollywood who pegged Alexander as a one-trick pony forgot that he earned a Tony Award (a yearly award given to the best Broadway actor) the same year that "Seinfeld" aired. Those critics pigeonholed his abilities despite Alexander proving his splendor in a completely different medium than television. I posit the same phenomenon is now taking place with Julius Randle and his perception around the league.

Last season, Randle was the best offensive player on a gritty, feel-good New York Knicks team that vastly outperformed regular-season expectations, and then, subsequently flamed out in the playoffs. Now, with the Knicks firmly outside the playoff picture and Randle’s numbers down across the board, the ultra-hegemonic NBA community has passed judgment on his standing within the league. To them, Randle is merely a “floor-raiser” who — with a little shooting luck — can carry the offense of a strong defensive team to a first-round exit, and that's the best and only role he can play.

During that singular season, Randle matched his gaudy scoring volume from his All-NBA season while also surpassing his efficiency and free-throw outputs by a significant margin. And what’s more, he managed this performance while being cast for a completely different role than in New York.

Last season, Randle led his team in shot attempts per game by nearly four attempts (per Basketball Reference). In 2018-19, he was third on the Pelicans in field goal attempts behind Jrue Holiday and Anthony Davis. Randle operated as a secondary/tertiary offensive option on a team that tied for 11th in offensive efficiency. Not a world-beating unit by any stretch, but a massive step up from the 23rd-ranked offensive attack New York fielded last year.

The key variable in this equation to focus on is Holiday. In the 1,416 minutes they shared together on the court, Randle posted a nylon-tarnishing True Shooting percentage of 61.4% (per PBP Stats) — an efficiency bracket normally reserved for the game’s most productive scorers. Holiday’s steadying presence as an elite floor general enabled Randle to function as a play-finisher rather than a play initiator. This allowed the big man to unlock the best combination of volume and efficiency he’s had in his career thus far.

In New York, Randle has taken notable strides as a playmaker (posting the highest assist percentage and passer rating of his career in 2020-21), but he’s still at his best when he’s flanked by a lead ball-handler who he can lean on as a play creating safety-valve.

Over the last two seasons, Derrick Rose has proven to be the best candidate for that designation. In 958 minutes together, Randle is averaging a TS% of nearly 58%, which would put him firmly above the league average for that time (per PBP Stats). Another wrinkle to add to their relationship is that Randle scores 25.1 points per 75 possessions when the two share the court, a mark that exceeds his career-high from 2018-19. The overall takeaway here is that when he’s paired with a credible offensive creator, Randle can transform into an off-ball-scoring leviathan.

Detractors will counter by saying the notoriety that comes with being a high-paid star at Madison Square Garden has corrupted Randle’s psyche and turned him into a ball-stopping hardwood warlord. And to that, I will concede possessions like this occur far too often:

However, along with my concession, I will also contend that Rose has been out since the middle of December and that, despite their “best” efforts, the Knicks have failed to provide Randle with the offensive insurance he needs.

Randle was probably punching above his weight class last season, but being the No. 1 scoring option on a middling team is not the full extent of his powers. And it's not fair (or wise) for us to place those types of constraints on abilities. Surround him with other high-level offensive players that can take some playmaking weight off his shoulders, and he's already demonstrated that he can elevate the ceiling of a really good offense.

That’s something to keep in mind if you're an organization looking to trade for him — or a Knicks fan base that has all but given up on him.