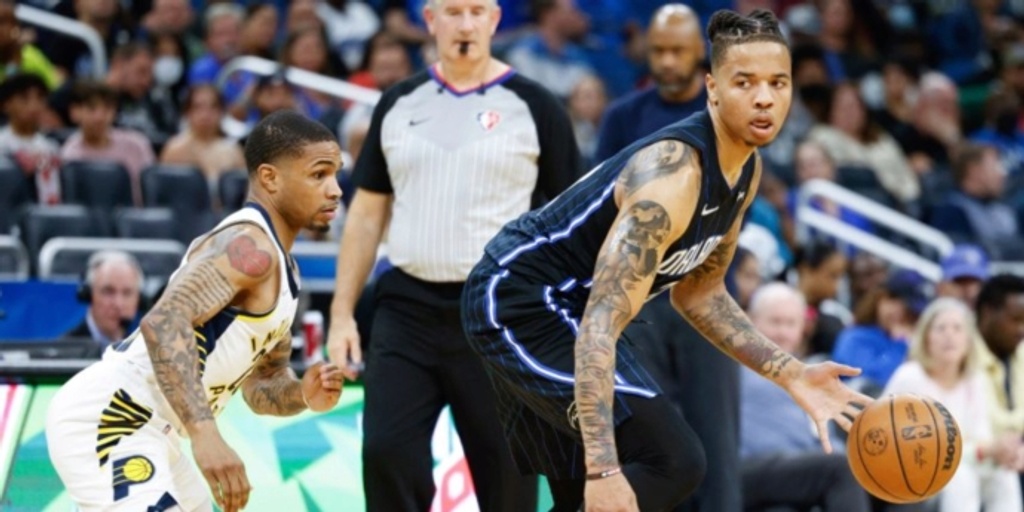 Markelle Fultz played in an NBA game for the first time in 418 days, returning to the Orlando Magic after a lengthy rehab for a knee injury. Fultz played 16 minutes in a sizable victory over the Indiana Pacers, finishing with 10 points and 6 assists, going 5 of 7 from the field.

While Fultz is still just 23 and an intriguing part of Orlando's rebuild, this team has changed a lot in the year and change since he last played. What can we glean from his initial foray to the hardwood this season?

It was just one game and he was on a minutes restriction, However, I did think it was pretty interesting that he didn't log a single minute with Jalen Suggs or Cole Anthony. I'd imagine this is largely due to wanting to get him comfortable in his first game back, but considering that Suggs and Anthony aren't going anywhere soon, it definitely made me go "hmmm," as Nekias Duncan would say (listen to the Dunker Spot).

It's worth noting just how porous the Pacers' defense has been of late (No. 28 in February, per Cleaning the Glass), but Fultz dazzled with ease, slicing into the defense.

He pushed the pace off misses and looked for easy kick-aheads in early offense.

He primarily operated out of a ball-screen or with a snug screen on drives (something I particularly enjoyed being thrown in from Magic head coach Jamahl Mosely).

This allowed him to mostly avoid driving into significant contact, and he was adept at setting up his man right into the screener, or even just using his bigs as a barrier if they weren't setting a screen.

I also loved the utilization of quick pitches and pistol actions to mimic the action of ball-screens while making it harder to go under them. Fultz didn't take a three last night, but he also didn't fully need to, as Orlando schemed to try to make it all about getting to paint and creating.

This drive still gets stalled, but by using the pitch instead of the screen, it forces a switch between Chris Duarte and Duane Washington Jr.; Fultz took full advantage of it by immediately backing down the latter, as he still got some downhill traction.

Tyrese Haliburton brings late help, but from the strong side and on a poor angle, and Fultz hits the cutting Gary Harris to draw free throws.

In the moments where Fultz was walled off and didn't have an immediate passing window when he got into the paint, he let his pull-up jumper fly — and it looked pretty good!

The footwork was immaculate, the jumper was fairly fluid; the hitch just isn't as big of a deal or as detrimental when he's inside the arc; there's the slight pause at the top of his release, but these are crisp shots. (He shot 43.3% on pull-up twos in 2019-20, his last healthy season, a pretty solid mark!)

Fultz felt smooth as a mover throughout his time on the floor, but definitely seemed a bit fatigued later on, entirely sensible considering how long it's been since he's played a game. He was really active on defense, routinely tagging up the roller and using his wingspan to be a nuisance. You could see some slight struggles with screen navigation, and he got dusted at the point of attack pretty cleanly once, but it felt much more due to fatigue rather than the residual impact of his knee injury.

The most encouraging thing to me from his comeback game? Fultz was not afraid of contact, a common barrier when returning to play.

With both of these boards he went after, I let out a little cheer at my desk! Fultz's game is so predicated on interior play, so returning without hesitancy is so crucial to his efficacy and confidence. (Also, oof Mo Bamba.)

Here's my highlight of the night though.

Fultz attacked the second side off the catch on a broken play. Again, the Pacers' defense was BAD (it helps to have both players involved in ICE coverage), but the finish was so slick to adjust to the late contest.

Overall, this was a really fun game from Fultz, as he demonstrated his feel and court vision. He pretty easily factors in as the best live-ball passer on the Magic, and I'm very intrigued to see how he starts to mesh into the current core.

I really liked his minutes with Wendell Carter Jr. and find them to be a pretty natural pairing. Dynamic screening will be a boon to helping optimize Fultz, along with mixing in Carter's pop game.

Franz Wagner and Fultz in tandem is so, so enticing, and I fast-forwarded through the game in hopes of seeing that they played another stint together. I need more! The people demand it.

While last night allowed for some rose-colored optimism, it's worth noting that it could be a while before Fultz is fully back to his true self. Just seeing him on the court again last night and doing the things that make him such a funky and endearing player was joyous, and made for a great evening of basketball.

As the Magic look to find further footing in their core the remainder of the season, it's more than worth tuning in to see how things develop.