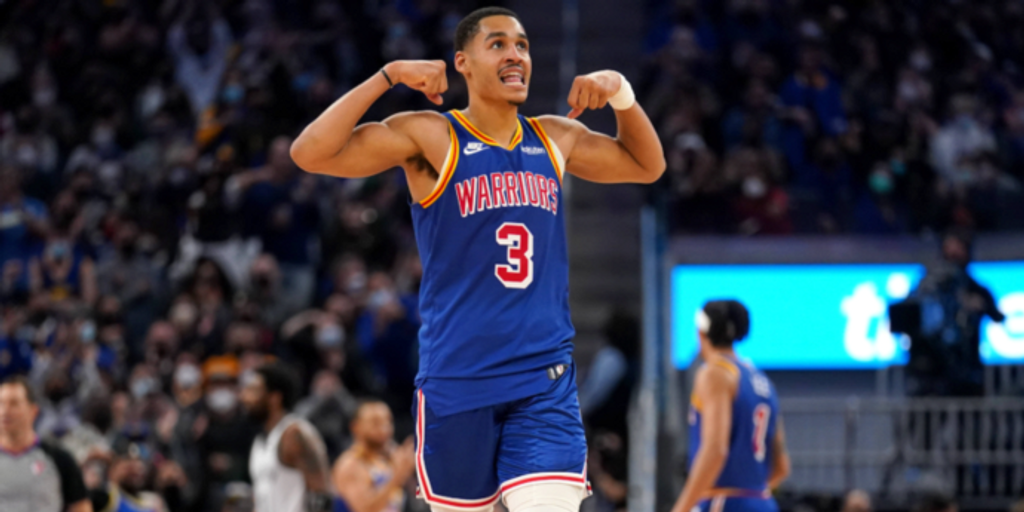 Why the Warriors don't need to worry about paying Jordan Poole

All is well in Warrior Land.

Klay Thompson’s back from his 941-day hiatus, and he’s rekindled his usual splashiness with an added wrinkle of dribble creation. Draymond Green has resurrected his podcast career and should be back on the floor shortly. Andrew Wiggins may not be an All-Star starter in impact, but he's still playing like a top-50 player. Youngsters Jonathan Kuminga, Moses Moody, and James Wiseman (via Twitter workout videos) show just enough flashes to keep Warriors to Twitter at Bay (ha, get it).

I repeat: All is well in Warrior Land, set up to compete now and well into the future.

So what then, is this all about?

The Warriors will reportedly look to lock up one of their young stars this offseason https://t.co/zOW0f8yfkX

To figure it out, I caught up with Connor Letourneau of the San Francisco Chronicle — the man credited with breaking this story:

“My understanding is that the Warriors will try to sign Poole to a contract extension this summer, which would keep him from hitting restricted free agency in summer 2023," Letourneau told BasketballNews.com. "To get a deal done, Golden State will probably have to ink him to a contract in the four-year, $80 million range."

On the surface, that seems like a gross overpay, particularly when you factor in Golden State's current salary-cap situation. Letourneau followed up on that.

“The Warriors think he's worth it. And I don't blame them," Letourneau said. "Poole has improved more in the past two years than perhaps anyone else in the NBA, and he's only 22. I could see him becoming a CJ McCollum type. But then again, I should know better than to put a ceiling on him. He has far exceeded every projection I've had for him to this point.”

Great point. And I like the McCollum comparison, but I’d take it a step further. When I see the wirey, chaotic guard blazing across the court and soaring into the air, I get flashes of Zach Lavine — a player who cashed in a similar deal not too long ago.

In the summer of 2018, Lavine inked a four-year, $76 million dollar deal with Chicago (as a restricted free agent). Here is how he compared to Poole at the time:

Of course, Lavine has since progressed to All-Star status and earned himself a reputation as one of the 20 best offensive players in basketball. He’s worth every penny the Bulls paid him way back when.

If I was a betting man, I’d put a reasonable amount of Prize Picks money on Poole doing the same.

Now, this is the part where someone pulls this up:

Not every young player that shows promise ends up being a future All-Star.

For starters, at age-22, he’s already adept at scoring at all three levels of the basketball court. Stepback three-pointers, balletic mid-range floaters, herky-jerky dribble moves into gallant attacks at the rim. All those things are firmly in his wheelhouse. How do I know that? He literally flashed it all in less than *checks clock* five minutes of game time.

Outside of the All-Star trio (Ja Morant, Zion Williamson and Darius Garland), the player who gets the most air time from the 2019 NBA Draft class is Tyler Herro, which is fair. He’s made some massive strides this year. But why aren’t people making outlandish claims about Poole like this?

“He got screwed out of the All-Star Game. He should have been there. ... I would not give up Herro [in a package] for [Bradley] Beal this summer.“https://t.co/bREQEd7jsC

* Data provided by Cleaning the Glass

Poole is converting shots at the rim and from the mid-range at a significantly higher rate than Herro. And while his three-pointer may be lagging behind, his league-leading free throw percentage (92.2%) is a strong indicator that he’ll figure it out from beyond the arc.

Also, for my volume stans out there, Poole has maintained his True Shooting percentage from last year (58.1%), despite taking nearly four more shots per game.

As it stands, his passing is how you say ~ volatile ~ seesawing between sublime and errant depending on the possession (hence his career-highs in assist and turnover rate). When it’s working, though, things get freaky:

I loved Poole coming out of Michigan because of his flexibility on his dribbles, taking some crazy angles with his body before hitting Kevon with the bounce pass out of the empty side pick and roll for an open dunk pic.twitter.com/jXRSvj7UvY

One thing that should stand out to you about that clip (gifted to us by the venerable Charlie Cummings) is Poole’s ability to draw two to the ball. That occurrence should trigger memories of this:

I’m not the first person to make that connection — Jackson Frank and Joe Viray have written about this — but Poole’s gravity (second-best on the team) enables him to temporarily masquerade as the resident, baby-faced assassin within the Warriors' offensive system. This ability to temporarily operate as the team’s lead guard and short-roll ignitor takes a massive burden off the chiseled shoulders of Curry, who has had a history of gradually breaking down during the second half of the season (see the 2016 playoffs).

Also, it’s worth noting that very few players can be the understudy of one of 10 best offensive players ever.

One last note I want to make about Poole is regarding his character, which is normally something I try to avoid (it’s mainly speculation unless you know the person). But when so many people sing your praises, that has to mean something. Listen to this great clip of two of the best basketball minds ever talking about his maturation as a decision-maker:

Both Steve Kerr and Steph Curry mentioned this specific Jordan Poole transition pass last night as a sign of growth.

The play and the soundbites pic.twitter.com/Gt2eFlqOJt

That’s how everyone from the championship crew talks about him. Curry, Green, Thompson, Andre Iguodala — they all love Poole's guts. Game recognizes game. They see the fierceness, the swagger, the hunger and the relentless quest for knowledge and skill.

When you combine that package of intangibles with the product you see on the court, $20 million dollars annually looks like a bargain.