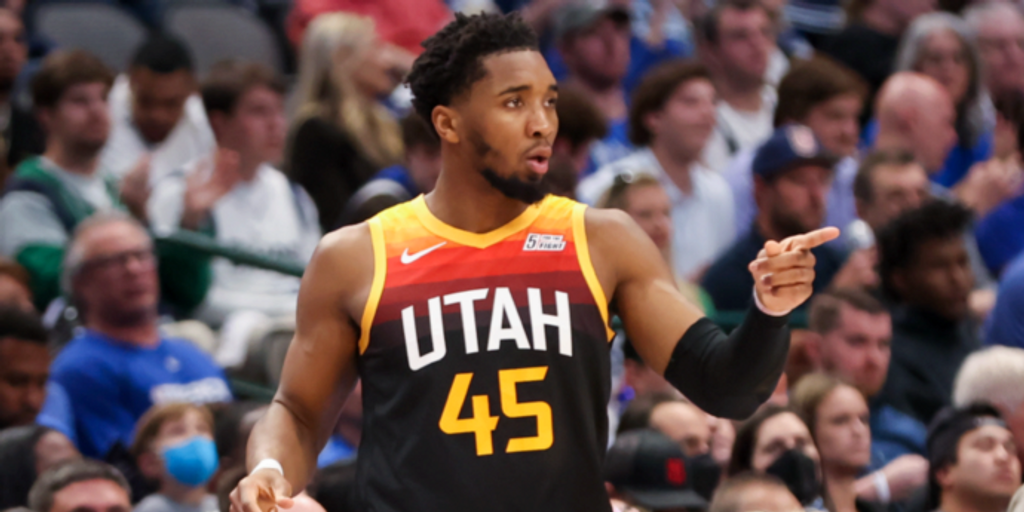 In spite of Luka Dončić only playing half of the series, the Utah Jazz have been eliminated by the Dallas Mavericks in the opening round of the NBA Playoffs, which can only mean it’s time to blow them up!

Okay, not really... but maybe? Virtually everyone is expecting organizational changes given the team's recent underachievement in the playoffs stemming from successful regular seasons. This incarnation of the Jazz was established in 2017-18, behind then-rookie Donovan Mitchell’s quick rise to stardom and Rudy Gobert’s emergence as an annual Defensive Player of the Year candidate.

That season, Mitchell — filling the void left by Gordon Hayward — finished his first season as a 20-point-per-game scorer despite being picked No. 13 overall and averaging just over 14 points per game in his first 19 appearances. Gobert, even having played only 56 games, was awarded his first of now three DPOY awards.

In these five years, there have been as many playoff trips — three as the No. 5 seed (including this season), one as the No. 6 in the Orlando Bubble, and another as the top overall seed in the Western Conference last year.

In 2017-18, the Jazz overachieved, taking down the Russell Westbrook-Paul George-Carmelo Anthony-led Oklahoma City Thunder in six games before losing to the No. 1 seed Houston Rockets in five contests.

In 2019-20, the Jazz squandered a 3-1 lead to the Denver Nuggets, losing Game 7 in the final seconds of the opening round.

Last season — despite the Los Angeles Clippers losing Kawhi Leonard to a torn ACL (that he’s still not back from) — the Jazz lost in six games to the Clippers in the West semifinals, and Gobert was dunked on by both Terance Mann and social media in the ending.

And finally, this postseason — in a series with Dončić missing the first three games with a calf injury, in which Utah still trailed 2-1 upon his return — Utah lost on yet another last-second heartbreaker.

THE PLAYOFF DROUGHT IS OVER. THE DALLAS MAVERICKS ADVANCE TO THE SECOND ROUND SINCE 2011!@dallasmavs | 📺 BSSW | #dALLasIN | #NBAPlayoffs pic.twitter.com/VcWGAdSOL4

Given the sniping back-and-forth between Mitchell and Gobert, the Jazz's inability to break through and how far behind they appear from the top teams in the West, this seems like the summer where sizeable moves will be coming.

Personally speaking, it feels like we’re heading toward Mitchell requesting a trade and moving on, but either way, one of Mitchell or Gobert — perhaps both — may be on the move in the coming months. Our Evan Sidery recently looked at five trade ideas involving Gobert.

Today, let's look at where Mitchell could end up, using this trade machine.

Mitchell’s father, Donovan Sr., works with the New York Mets organization. The 25-year-old Mitchell himself is a native of Elmsford, New York. Naturally, with the New York Knicks, there will be Mitchell smoke until a deal (or something else) actually happens. Because Tommy Beer already broke down the possibility of a Mitchell-to-New-York trade, we won’t stay here too long.

Regarding the Knicks’ actual proposal, the first look would be to RJ Barrett, who is extension eligible this summer, entering year four and making $10.9 million next year. The idea, for New York, should be to team Barrett and Mitchell together. If that’s not possible, and the Mitchell deal were to have to get done, Barrett is your chief trade chip, along with first-round draft picks. The Knicks have all their own first-rounders as of this writing.

Usable salaries for the Knicks next year include Evan Fournier, who’ll be at $18 million, Derrick Rose at $14.5 million, Alec Burks at $10 million, Nerlens Noel at $9.2 million and Kemba Walker at over $9.1 million. Rose, Burks and Noel all have team options for 2023-24, so they have ostensibly expiring deals. Walker’s next season is his last under contract, and Fournier is signed through 2025, but that also includes a team option. Cam Reddish and Taj Gibson also enter the last year of their respective deals, at about $6 million and $5.1 million each, respectively.

The contract elephant in the room is Julius Randle’s, which is a four-year, $117 million extension that begins next season at $26.1 million. It’ll gradually increase until his player option for $32.4 million kicks in for 2025-26. The Knicks might try to move Randle instead, but what sense does that make for Utah? And if Utah isn’t getting Barrett, would they want a package of the aforementioned veterans (say, Fournier and Burks), along with one or two of Immanuel Quickley, Quentin Grimes, or Miles McBride (who make between $1.6 and $2.3 million next year) and picks?

It’ll be hard to do without Barrett, and maybe Randle gets involved in a three-team deal, but the Knicks have the picks, salaries and prospects to make it work, if that’s the route the Jazz want to go.

The Pistons seem like a team that could be a version of this past season’s Cleveland Cavaliers — not in terms of play style or once being a top-four team in the Eastern Conference standings necessarily, but from the standpoint of being competitive a year sooner than we think and playing meaningful games down the stretch (like one or two in the Play-In Tournament).

Given that 20 of 30 NBA teams will have games beyond the regular season, the Pistons may (should) attempt to get one of those spots.

Last year’s No. 1 overall pick Cade Cunningham is someone you can build with. Saddiq Bey should be a more efficient scorer with more experience and better teammates. Most of the rest is to be determined, but Detroit can start by using Jerami Grant’s near $21 million expiring deal next summer.

What comes next depends on what stage the Jazz want to be closer to. If this is a rebuild, you can ask for a combination of Killian Hayes and Hamidou Diallo (both of whom make over $5 million next year), for example, and Hayes has a $7.4 million team option for 2023-24. If not, Kelly Olynyk has $12.8 million coming to him next year that’s usable. Utah can in throw in, hypothetically, Royce O’Neale’s $9.3 million deal next year and get Olynyk anyway.

I brought this up during BasketballNews.com's NBA Trade Deadline stream.

The Heat didn’t do it then, but it might still be on the table depending on how these playoffs go. The Heat might not offer the best return package because of their draft picks, but they did unlock additional firsts by moving KZ Okpala to Oklahoma City in February. And, for Miami, we’re mainly talking about one package. But again, it depends on the results of this postseason.

Currently, the Heat are getting ready to face the Philadelphia 76ers in the Eastern Conference semifinals, a matchup they’re favored to win (albeit narrowly). If they lose this particular series, or if they win and Tyler Herro continues to struggle in the playoffs, or even if Miami makes a deep run and Herro elevates from a slow start, he’d be the primary chip in a Mitchell deal. Furthermore, the Heat are on Mitchell’s shortlist, according to Greg Sylvander of Five Reasons Sports.

The deal, as I mentioned on our stream, would include Herro — who is still on a rookie-scale contract ($5.7 million next year), but is extension-eligible this summer and wouldn’t kick-in until 2023. Then comes Duncan Robinson, who’ll enter the second year of a five-year, $90 million deal next season, which bookends with a near $20 million player option and rises to $16.9 million next season.

According to the trade machine, Omer Yurtseven’s $1.7 million next season makes the math work, and would give Utah a Gobert backup who’ll, if nothing else, get you 10 rebounds in 15 minutes on occasion. Would the Heat have to throw in at least one of Gabe Vincent, Max Strus or Haywood Highsmith (all of whom make between $1.7 and $1.8 million next year)? Perhaps. And from there, Miami has tradeable first-rounders in 2022, 2024 and 2026. So, in summation, it could look like this:

But if Herro has a big playoff run moving forward, the Heat may instead opt to move Robinson in a separate, smaller deal for a worthy big man in their rotation, and mostly run it back otherwise.

Alright, now you saw what the Heat did to Trae Young in the first round. The Hawks clearly are not only poised to get Young some help, but make a 3-for-1-ish deal to consolidate some depth into a higher-end starter — or in the case of Mitchell, a fellow offensive starter. His teammate, Gobert, is probably the better fit, but one, I’m not writing about Gobert (our Evan Sidery will handle that) and two, if Gobert is frustrated with Mitchell’s defense...

But anyway, you gotta start somewhere. And for Atlanta, part of why the Heat neutralized Young is their malleability defensively, but also, the Hawks don’t have another true star to account for on the perimeter. Mitchell would give Young a viable tag team partner offensively to spread the defensive focus. To do so, the Hawks could play this a few different ways.

The obvious trade chip is John Collins, and there could be questions about his fit next to Gobert, but it’s not a bad place to start if you’re moving someone of Mitchell’s caliber. Collins will make $23.5 million next year, and between $25.3 and $26.6 million through 2025-26. Collins has had rumored friction with Young, though they’ve downplayed it over the years. From there, if you use Collins in a possible deal, it gets interesting.

De’Andre Hunter — who makes $9.8 million next year in the last season of a rookie deal and is extension-eligible this summer — seems logical for both the Jazz to want and the Hawks to keep. Hunter was Atlanta's best player against the Heat, and has been a quality two-way wing when healthy. Is a framework of Collins and Hunter for Mitchell straight up enough of a deal for both sides? Sheeeeeiiiiit, ask them, but it sounds good to me!

No Collins? Okay. You’re not moving Clint Capela’s long-term deal for Utah in a Mitchell move, so that’s out of the picture. Kevin Huerter would absolutely have to be part of this, and no, that’s not a white Utah joke. Hu-why would you think that?

Huerter begins his $65 million extension next year, the first of four, banking $14.5 million in 2022-23. Hunter probably stays in the deal because Utah has to get something really good, and the Hawks simply can’t extend everyone. Again, Atlanta should want to keep Hunter, but this is the price of doing business. But if you’re throwing in Huerter instead of Collins (which does work on the trade machine since different rules apply in the offseason than in-season), you’ll need multiple first round picks — of which the Hawks have all their own — so that could get done.

Could Utah also want Onyeka Okongwu? Sure, but he seems like Atlanta's 5-man of the future, and a separate deal moving off Capela might be more likely. So the second proposal could look like this:

Now, the Hawks would still need to figure some things out defensively, seeing as how they’d be led by two 6-foot-1 scorers in the backcourt. They could just became the new Damian Lillard and CJ McCollum to some extent, but the Portland Trail Blazers are as much to blame for that “not working,” and the Hawks can learn from those team-building mistakes.