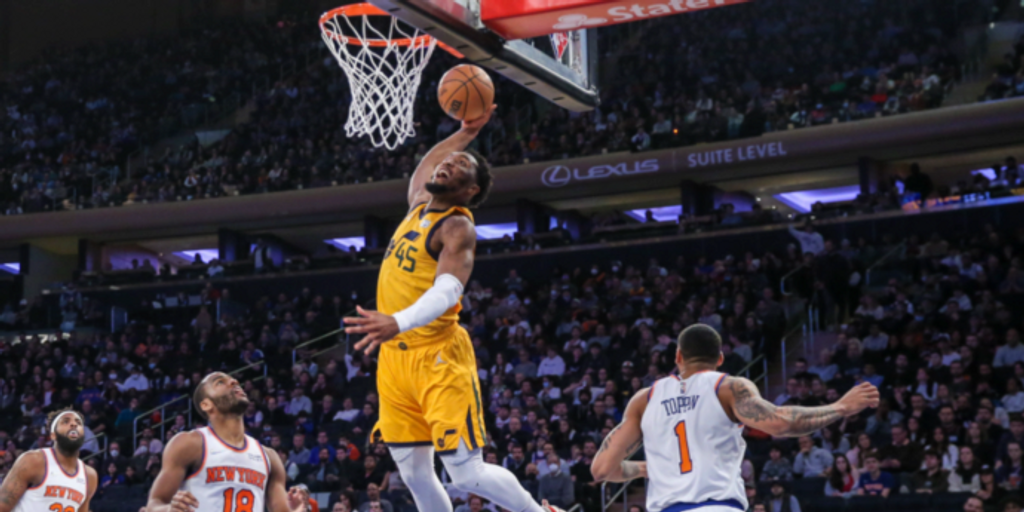 After the Utah Jazz were eliminated by the shorthanded Los Angeles Clippers last June, the rumors swirling around Donovan Mitchell and his potential departure from the team began in earnest.

Following an ugly five-game losing streak earlier this year, the rumors picked up more steam. In late January, NBA analyst Ric Bucher of FOX Sports reported that the "incessant buzz around the league is that there are those in Mitchell's circle who believe he is too big of a star for Salt Lake City."

The league-wide gossip has only intensified, as the Jazz have imploded over the past three months and descended down the Western Conference standings in the process.

Utah was 26-9 over its first 37 contests this season and trailed the West-leading Suns by just a game on New Year's Day. However, the Jazz are four games below .500 (18-22) over their last 40 games. And things have gone from bad to worse as of late.

Not only have they lost 6 of their past 7 contests, but they've also somehow managed to blow massive leads in back-to-back defeats (bungling a 25-point advantage to the Clippers and a 21-point lead in a loss to the Golden State Warriors). On the season, the Jazz have lost 15 games in which they've held double-digit leads. During this current seven-game stretch, Utah's defense has been non-existent, allowing a whopping 123.2 points per 100 possessions.

The Jazz currently find themselves sitting in the No. 6 spot out West, just one-and-a-half games ahead of the Minnesota Timberwolves, which means Utah could potentially slip into the Play-in Tournament.

The relationship between the star duo of Mitchell three-time Defensive Player of the Year Rudy Gobert has been notoriously rocky in years past, and it appears to be wobbly once again.

Mitchell not sharing the ball with Gobert has become a topic of conversation. On the season, Mitchell has passed the rock to the big man just 151 times, or on average, less than twice per game.

Donovan Mitchell's full response at shootaround this morning when he was asked about the number of times he passes to Rudy Gobert per game: pic.twitter.com/OTez0jURfz

After Utah choked away a massive lead to the Clippers last week, Gobert was brutally honest in his postgame presser.

"Nobody hits nobody. We don't get our hands dirty. We never get our hands dirty," Gobert told reporters. "We're a very good basketball team, but I get f***ed up every night, and guys are literally beating me up every night, as they should. It's basketball; it's a physical game. But we have to get to the point where we do that to the other team too. But teams don't really expect that from us."

Mitchell was later asked about finger-pointing while the team was struggling.

"That's childish, in my opinion," Mitchell replied. "If we do that, then we've got some big problems."

Three days later, Utah blew another double-digit fourth-quarter lead in Golden State. "I don't know how many times it's gonna happen," Gobert said afterward. Jazz beat writer Tony Jones wrote that the Jazz "play as if they have zero trust in each other, and that's the hard truth."

If the Jazz flame out in the playoffs later this month (they are just 10-17 in the postseason over the last three years), Utah's front office will have some tough decisions to make. And many NBA insiders believe Mitchell may force the organization's hand.

Appearing as a guest on the "The Lowe Post" podcast last Friday, ESPN's Tim MacMahon proclaimed:

MacMahon added that "other teams have been planning to make a run at Mitchell" for quite some time.

On a podcast in February, Howard Beck of Sports Illustrated also painted a grim picture of the situation in Salt Lake City:

I think they're in trouble because this thing has run its course, and we know there are some tensions that are in that locker room. And I've been told recently that they might be a little worse than we've even been led to believe. And so, if this doesn't end well this postseason, and there's no reason to think that it will... Those "Donovan Mitchell wants out" rumors are going to be starting, like, as soon as the season is over.

However, Mitchell signed a five-year, $163 million contract extension in November 2020, which includes a player option worth $37 million for the 2025-26 season. Thus, he is still under contract in Utah for at least three more years.

Despite some ups and downs as of late, Mitchell is undeniably one of the most dynamic and productive young players in the entire league. This season, at the ripe age of 25, he is producing 26.1 points and 4.1 rebounds to go along with career-high averages in assists (5.4), steals (1.5), made three-pointers (3.5) and field goal percentage (45.4%).

Mitchell has already tallied over 8,000 points, 1,500 assists and 1,400 rebounds in his young career (343 games). The only players to exceed those totals in these statistical categories in fewer career contests are LeBron James, Dwyane Wade, Michael Jordan, Pete Maravich and Oscar Robertson. That's decent company.

And although the Jazz have stumbled in the playoffs, it's unfair to pin those defeats on Mitchell. He has played some of his best basketball when the spotlight shines brightest. In the 17 postseason games Utah has played over the last two years, Mitchell's averaged a whopping 33.9 points and 4.9 treys per contest. Kevin Durant and Luka Doncic are the only other players averaging more than 30 points per game in the playoffs since 2020.

So, to make a long story short, the Jazz will only consider trading away their three-time All-Star if he demands to be moved.

Should Mitchell inform Utah he wants out, plenty of pundits predict that New York will be his preferred destination.

There is plenty of connective tissue between Mitchell and the Big Apple. For starters, Mitchell was born and raised in New York. His father, Donovan Mitchell Sr., is a former minor league baseball player who works for the Mets as the club's director of diversity, equity and inclusion. The younger Mitchell spends much of his offseasons in New York and often tweets about his favorite MLB team.

The only time we’re happy to have a 🕷 in the house. @spidadmitchell pic.twitter.com/G4J7Lb2a2F

Mitchell also has a very close relationship with Knicks assistant Johnnie Bryant, who mentored Mitchell during his days in Utah before joining head coach Tom Thibodeau's staff. Marc Berman of the New York Post has reported, "Bryant is a key figure in the Knicks' long-term hopes of Mitchell tiring of playing in one of the NBA's most obscure markets in Salt Lake City." In addition, New York team president Leon Rose served as Mitchell's agent before leaving CAA to join the Knicks' front office.

"Some say it’s only a matter of time before he joins former Creative Artists Agency agent and current New York Knicks president Leon Rose," Ric Bucher wrote earlier this year. He added that an Eastern Conference scout told him: "They're a first-round exit from Donovan being in New York."

While Utah has not lived up to expectations thus far this season, their struggles pale in comparison to the dissatisfaction New Yorkers have dealt with. The Knicks have, once again, failed to advance to the playoffs coming off last season's first-round postseason exit. The franchise has won a grand total of one playoff game over the last nine years. Yes, one.

New York has not been shy about courting superstars in the past. And coming off a disappointing and unsuccessful season, the pressure will be ramped up on Rose and Co. to make a major move. A native New Yorker with All-NBA talent about to enter the heart of his prime seems like an ideal target.

So, while Knicks fans won't be able to cheer for their favorite team in this year's playoffs, you can rest assured they will be rooting very hard for one club in the first round — whichever team is matched up against the Jazz.

In terms of assets involved in a potential blockbuster, the Knicks have several promising young players on their roster, including RJ Barrett and Immanuel Quickley (who has been playing at a high level since the All-Star break), as well as Cam Reddish, Quentin Grimes and Obi Toppin. New York also owns six first-round draft picks over the next five years. And if Utah were interested, the Knicks would certainly be willing to send Julius Randle (who struggled this season, but was named to the All-NBA Second Team a year ago) packing in a package deal for Mitchell.

Yet, it's important to note that even if Mitchell demands a trade and wants to relocate to New York — and whether the Knicks are willing to push all their chips into the middle of the table to bring him home — the Jazz are going to do what's best for their organization. That means canvassing the league and looking for the best possible offer.

And, make no mistake, several teams will gladly surrender a king's ransom for a young superstar under contract for three more seasons.