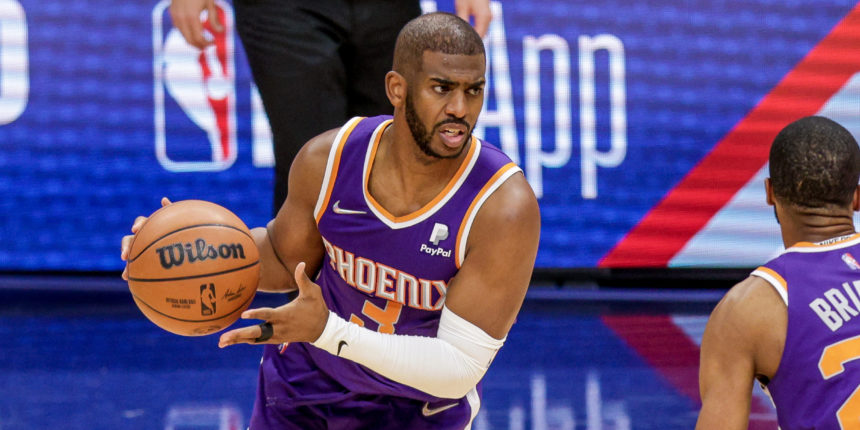 Chris Paul's Game 6 masterclass is his latest moment of greatness

Chris Paul turns 37 years old next week, but you would have no idea that’s the case with the way he slammed the door shut on the New Orleans Pelicans potentially forcing a Game 7.

The Phoenix Suns’ future Hall-of-Fame point guard put together a masterclass performance, dropping 33 points and 8 assists on 14-of-14 shooting. Paul is the only player in NBA postseason history to attempt at least 14 field goal attempts without a miss, once again putting the Suns on his back when it mattered most.

Paul was the Suns’ only reliable offensive threat in Game 6, and he was totally okay with that. Easily slicing and dicing through New Orleans’ aggressive on-ball defense, Paul was able to get to his spots on the floor with no issue.

What was most remarkable is the fluidity and ease with which he disposed of New Orleans' defense. The Pelicans threw a hailstorm at Paul, toying with matchups, personnel, pressure and coverages.

As the game wore on, Paul eradicated each barrier set in front of him.

Jaxson Hayes struggled much of the series to remain an on-court neutral, and Game 6 was a microcosmic view of why (he ended up playing 12 minutes in spite of starting, playing only 13.8 minutes per game for the series).

Jae Crowder didn't shoot well last night, but he was dominant as a screener for Phoenix's offense. He set an absurd number of early offense screens to force inopportune switches and dicatate play immediately in the halfcourt.

Crowder makes contact with CJ McCollum before five seconds have leaked off the clock, and that was a regularity. Deandre Ayton sets his screen further in to make it difficult for Hayes to recover quickly to the perimeter and switch on the screen; Ayton was demonstrative as a screener last night, an obelisk on the court, always ready to shift the dynamics of the court in a moment's notice.

Ayton flips the screen to open a pocket for Paul, Hayes tries to fight back under as Jonas Valanciunas keeps things in front in drop coverage, and Paul cashes the jumper.

The Pelicans started to prioritize length and mobility as the game went on, pressing Paul tight with Naji Marshall, Herb Jones and Jose Alvarado. Larry Nance Jr., a force in this series, played close to the level of screens as the defense worked to shrink those pockets near the elbow.

Let's just note how many things the defense does here that they weren't off rip.

We have the three quarters pressure. The big is playing at the level. Ingram is fighting to deny the switch and keep Naji Marshall in front of Paul, as Marshall darts under the Ayton screen. Paul breaks right and jams Marshall into a well-placed rescreen from Ayton. Brandon Ingram stunts off Crowder to jab at the ball, but Paul is unfazed as he switches hands, crossing to his left before pulling up on a dime. Paul starts into his shot prep and Jones stunts from the strongside corner... and it just didn't matter.

New Orleans did everything they could to stay solid while attacking Paul in every which way, a culmination of adjustments they'd made throughout the first half, and yet Chris Paul still rendered it ineffective. That's soul crushing.

Perhaps the shots he didn't take did an even better job of showcasing how absurd his play was.

Watch this play. The control is unreal. Paul is having his Neo-taking-over-the-Matrix moment. Every dribble is precise, calculated and surgical. He's shifting Ingram constantly.

The second Ingram's hips turn, Paul flips the ball to Ayton for a quick rise and fire as he was in the midst of his own absurd shooting performance, as he went 10-of-12 from the field on a variety of finishes.

The late-game lob to take the lead was killer. The synergy between Paul and Ayton made a broken possession heartbreaking for New Orleans.

Just when you think Paul's kept in front and smothered, you're getting yammed on with a well-disguised lob.

If Chris Paul had taken 27 shots last night, I'm not sure he misses. He just hit everything, and some of the bounces he got were ridiculous, displaying his otherworldly touch.

A triple bounce on the rim after a high-arcing tear drop?

The ball flipping over the rim after hitting the front for the game-sealing bucket?

Just an absurd display of shot-making that felt willed on by divine intervention of some sort. It was one of the greatest offensive performances I've ever seen.

Throughout the Suns’ hard-fought first-round series against the Pelicans, Paul showcased brilliant moments on multiple occasions. In the end, Paul averaged 22.3 points, 11.3 assists and 1.8 steals on a 66.3% True Shooting.

As Suns head coach Monty Williams mentioned after the Suns’ close-out victory, this is just an expectation for players with the greatness of Paul.

“I just know that great players have a knack for that,” Willams said. “They know when to and when not to. The game slows down for them, slower than it does for everybody else.”

Williams even alluded to how Paul's outing is up there with the greatest performances (if not the greatest) he’s witnessed from his superstar point guard. And doing it back where it all started for Paul in the Association made this moment even more special. The roots in New Orleans are still entrenched for Paul, and closing it all out in this manner was simply a breathtaking experience.

“Unbelievably special,” Paul said of his historical game in New Orleans. “You have no idea what it’s like for me to walk in here. Everybody that works back here, these people part of my family. … Chris (an arena security guard), he been here since I was here. Pound him before every game here back when I played in New Orleans, and did the same thing this entire series. My older brother sitting on the baseline. All of these people, it’s my family. People sitting courtside been here since I was here.

"There’s nothing like playing in this city, man. There’s nothing like it. I went to other teams and all that, but the energy here, the way they show much love to the players, to your family. When I walked in, they asked if my parents were here and all that. And then Willie [Green], so many different ties to this team. [Garrett] Temple, Gary Clark was in my AAU program. … There’s so many different ties to New Orleans and there always will be.”

While sitting next to Paul, Devin Booker even mentioned how he and his father, Melvin, would drive down from Moss Point, Mississippi, to watch Paul and the New Orleans Hornets in the postseason. This full-circle experience for Paul is one he will never forget, and this trend of becoming an upgraded version of the “Point God” in close-out situations for the Suns continues to hold true.

Whether it be Paul’s historical Game 6 in the Western Conference Finals last season against another former team in the Los Angeles Clippers, or what he just pulled off another year older in New Orleans, there’s simply no more denying the greatness of CP3.

How the Washington Mystics are winning with activity
25 min

Lloyd Pierce opens up about BAL Coaches Clinic, his growth as a coach
5h