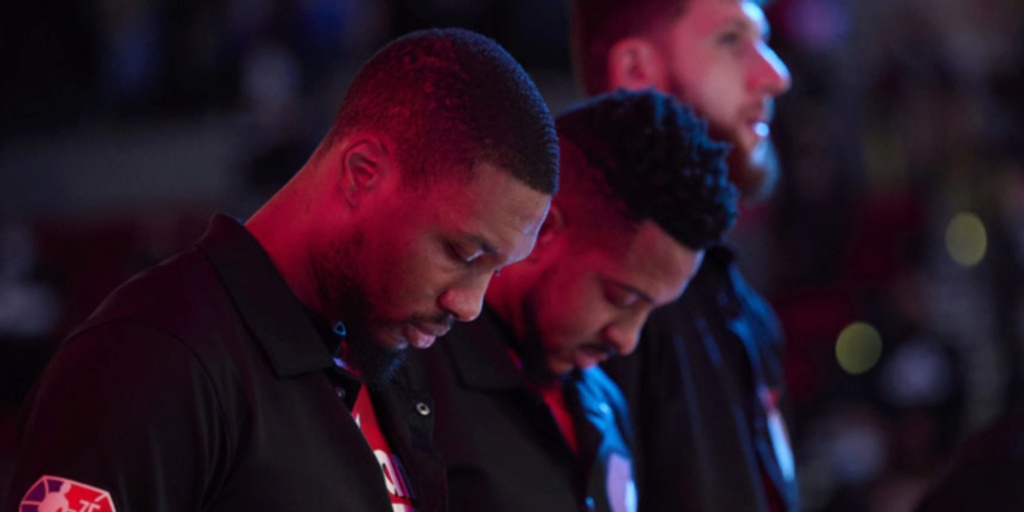 End of an era: Saluting the defiance of Damian Lillard and CJ McCollum

Damian Lillard’s defiance has made him a social-media punching bag, as his Portland Trail Blazers are dissolving around him and looking like a completely different team.

Lillard hasn’t played since New Year’s Eve, and as he recovers from abdominal surgery, he watched his team deal Norman Powell and Robert Covington to the Los Angeles Clippers while the best player coming back is Eric Bledsoe. Keon Johnsn was also included in the trade and while Portland hopes he pops off, he's only 19 years old, so who knows how soon he can make an impact? The Blazers also received a 2025 second-round pick – the year Lillard turns 35.

#Narratives are already in motion. The jokes have been flying on social media about how people are, in hindsight, underwhelmed by the run that Lillard and McCollum had. But before we stomp on their Basketball-Reference pages and laugh in their comments about “not having won anything,” we should offer a massive amount of respect for what they accomplished in Portland.

You’ve probably seen the photo of a 5-foot-2 McCollum as a freshman in high school, but even that symbolizes so much here.

The parallels Lillard and McCollum maintained were astounding; they were the reason the backcourt became divisive among NBA consumers — with some loving them and thinking that the Blazers could build a contender around them, while others refused to believe that a pair of 6-foot-3 scoring machines could lead a team to a title, even in this guard-friendly era.

These things need to be delivered out loud and thoroughly processed.

Lillard went to Weber State, and McCollum went to Lehigh. Both played in mid-major conferences, and they are two of the better mid-major players we’ve seen this century. But really, the Big Sky and Patriot League are closer to the bottom of the NCAA’s Division I conference rankings; take it from a Northeast Conference alum.

Lillard was drafted No. 6 overall in 2012; the only Weber State player drafted in the first round, period. McCollum was taken No. 10 overall the following year and is still the only Lehigh player to be selected in an NBA Draft. One of the first things that people noted when Lillard got drafted was that he never played against a top-25 team while in college. And Bill Simmons couldn’t believe a Patriot Leaguer was selected in the top-10 in 2013.

Suddenly, we looked up and Lillard was the NBA's Rookie of the Year, receiving every single first-place vote over perennial favorite Anthony Davis, who won a gold medal with Team USA during the 2012 Summer Olympics in London. And then, in 2013-14, Portland was in the playoffs, where they’ve been every year since Lillard and McCollum became teammates – the longest active streak in the NBA. Even then, McCollum didn’t have his coming out party until 2015-16, when he immediately filled an All-Star sized scoring role vacated by LaMarcus Aldridge (who left for San Antonio) and won the NBA's Most Improved Player award.

They played similarly and complemented each other exceptionally. Lillard and McCollum would each produce 20 points a night, occasionally going off for 30 each, and in a brutal Western Conference, return to playoffs no matter what was around them. And then they’d lose, which led some to dismiss them.

In 2015, it was a five-game gentlemen’s sweep as a No. 4 seed against the Grit N’ Grind Memphis Grizzlies, who went up 2-1 on the Golden State Warriors in the semifinals before losing to the eventual champions. In 2018, as a No. 3 seed, it was that memorable sweep against the same Pelicans that McCollum now joins, who were the sixth seed.

Then, in 2019, we finally saw a breakthrough: a run to the Western Conference Finals. Thanks to a legendary 37-point performance from McCollum in Game 7 of the semifinals, the Blazers beat the Denver Nuggets on the road – still CJ's paramount performance to date. Portland met up with the Warriors in the Conference Finals, and Golden State ultimately swept them (even though they were missing Kevin Durant, who was out due to a calf strain).

The Blazers followed up that Conference-Finals appearance with consecutive first-round exits. With that said, Portland's failures can't be blamed on Lillard and McCollum alone.

Their fellow starters and key teammates include Al-Farouq Aminu, Mason Plumlee, Meyers Leonard, Noah Vonleh, Jusuf Nurkić, Evan Turner, Mo Harkless, Jake Layman, Zach Collins, Trevor Ariza, Carmelo Anthony, Hassan Whiteside and Norman Powell. Despite having one of the best backcourts we’ve seen in generations, the Blazers could never figure out how to properly surround them with talent. (And honestly, doing is probably harder in the real world than we realize).

But in spite of their nitpickable shortcomings, their rigorous conference, their identical 6-foot-3 statures, their style of play and the lack of an ideal supporting cast, Lillard and McCollum co-engineered (along with Aldridge the first two years) the NBA’s longest playoff streak. And they did so defiantly, as underrecruited long-time college players who stunned scouts by becoming top-10 picks and high-end NBA talents.

They led five 50-plus-win teams and two No. 3 seeds out West. Lillard is a top-76 NBA player ever, and McCollum is one of the best active NBA players to never make an All-Star team (and he probably would've made multiple appearances had he been in the Eastern Conference instead).

People have been trying to separate this duo for years via trade machines, NBA 2K, forums, social-media posts, comments under those posts, text threads, direct messages, barbershop debates, radio call-ins, post-sex conversations, you name it. Finally, that day is here, and the circumstances suck.

Lillard continually preached loyalty and wanting to win the hard way. McCollum asked us to stop putting him in trade rumors.

The parallels between the two are why many loved them, and the parallels proved to be their demise. But dammit, they accomplished a lot. We could say that they were ultimately underwhelmed by their surroundings, but let’s also acknowledge how hard this damn thing is. You can’t take playoff streaks for granted – look at what the Pelicans, Cleveland Cavaliers and Sacramento Kings are doing this week in hopes of ending their postseason droughts.

This could’ve had a happy ending, and it still might, but it doesn’t appear that it’ll be with Lillard and McCollum together. They didn’t fail, and they probably didn’t live up to your (or their own) expectations, but that’s usually how our experiences on Earth go. Regularly, even if we don’t want to admit it, that’s OK, because more often than we acknowledge, that’s life.