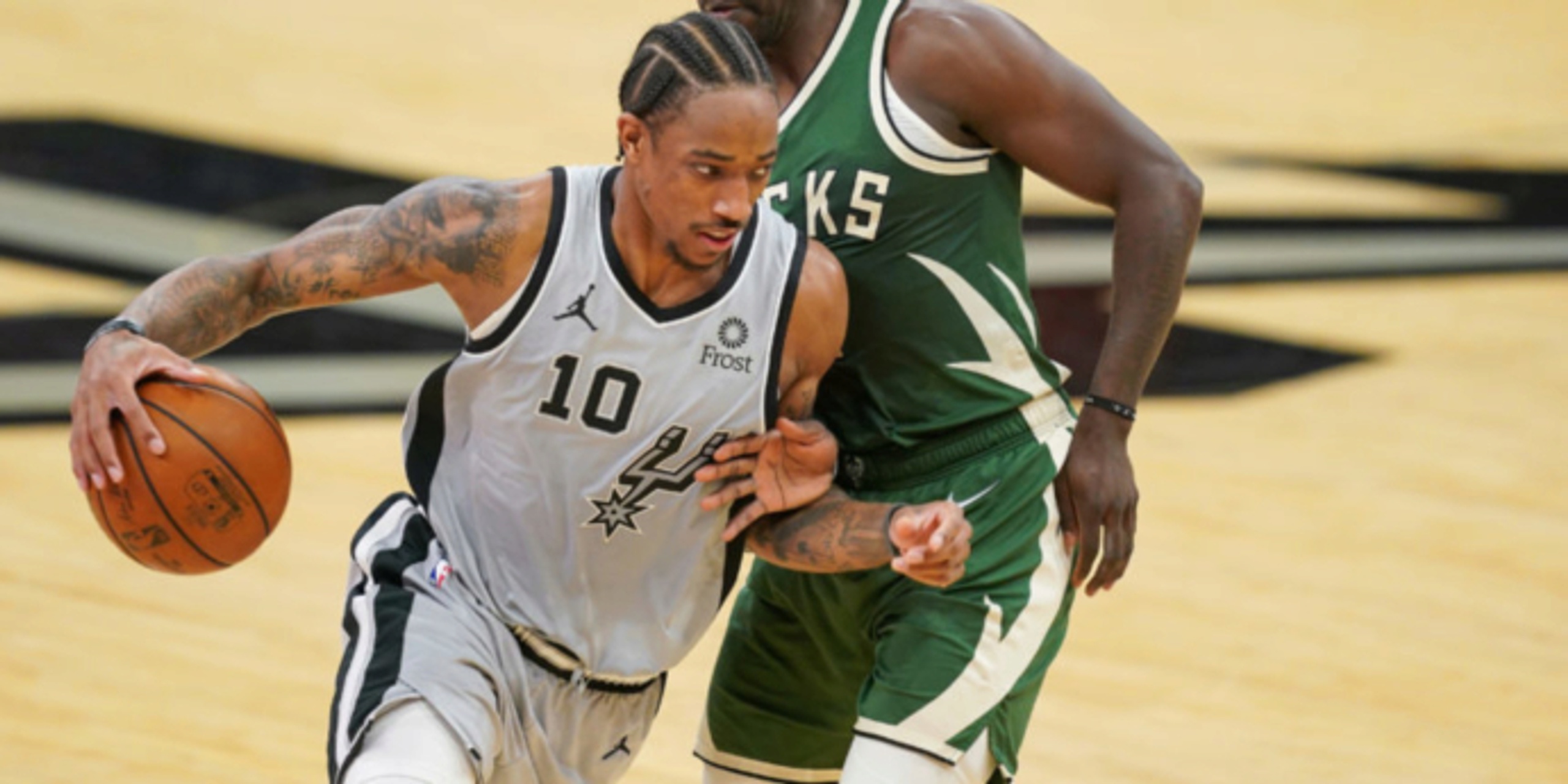 Arguably the best day on the calendar has officially arrived. Welcome to NBA free-agency, everybody. Today should be a huge news day, with a flurry of big-time moves occurring over the next 24 hours to open the moratorium period. There are already reports that Kyle Lowry to the Miami Heat is pretty much a done deal via sign-and-trade.

Outside of Lowry, one of the biggest names available on the open market who figures to be with a new team soon is DeMar DeRozan.

After being shipped from the Toronto Raptors to the San Antonio Spurs in the Kawhi Leonard trade, DeRozan has reinvented his game to become one of the better tertiary wing playmakers. Averaging only 3.1 assists over nine seasons in Toronto, DeRozan doubled that to 6.2 assists during his three-year stint with the Spurs.

DeRozan is also one of the best mid-range artists in the Association, able to get buckets at will from his hot spots.

Add those two factors together and DeRozan is a player who is well-deserving of a huge payday. Recently, DeRozan was linked to his hometown Los Angeles Lakers, but now that appears unlikely since he (understandably) wants more than the mid-level exception. Wherever he lands, he could be the missing piece for a team looking to take a leap forward in 2021-22. Let's go ahead and dive into the possible destinations for DeRozan as free agency kicks off.

After pivoting away from the Lowry sweepstakes, how will Dallas spend their $30-plus million in cap space? Mark Cuban would be wise to splurge on DeRozan, who fits very well alongside the Mavs’ inside-out duo of Luka Doncic and Kristaps Porzingis.

In order to make this happen, the Mavericks would need to renounce Tim Hardaway Jr.'s cap hold. Although Hardaway Jr. had a resurgent 2020-21 campaign, DeRozan takes much-needed pressure off Doncic as a ball-handler. During the Mavericks' first-round series against the Los Angeles Clippers, Doncic's usage rate was above 40. That can't happen long-term if Dallas wants to make deep playoff runs throughout Doncic's career.

Paying DeRozan $20-$30 million annually over the next three or four years is a gamble, but the disastrous Porzingis max contract has put the Mavericks in a tough spot to make significant splashes. DeRozan is probably their best shot in the near future.

The Knicks have been trying for years to woo superstars to the Big Apple, but every time, they've been left at the altar. With $50 million in cap space, will the Knicks go star hunting once again, or fill out the roster with a lot of win-now role players?

One underlying factor that should play into the Knicks' free-agency decisions is the future of Portland Trail Blazers superstar Damian Lillard. So much smoke has billowed out of the Pacific Northwest already about Lillard being unhappy and the 2021-22 season potentially being GM Neil Olshey's last chance to build a title contender around the All-NBA point guard.

Right away, the Knicks were mentioned as a team that Lillard could be interested in joining in the near future. If things fall apart for Lillard and the Trail Blazers, New York is set up to make a compelling offer using some pieces from their young core (which includes R.J. Barrett, Obi Toppin, Mitchell Robinson, Immanuel Quickley, Kevin Knox and Quentin Grimes among others).

With DeRozan on the roster, perhaps the Knicks become even more attractive to disgruntled stars since they would likely be closer to contention. Right away, DeRozan helps improve the Knicks' standing in the Eastern Conference, becoming a go-to scorer alongside Julius Randle. And we all know head coach Tom Thibodeau would love him as well.

Even if the Lillard sweepstakes never materializes in the near future, DeRozan gives New York a much-needed boost and helps them stay in the top half of the East over the next couple of seasons.

The pressure is already on the Pelicans to improve drastically. Time is ticking with their young superstar Zion Williamson. There are already rumors that some of Williamson’s family members want him to change teams, and it’s possible that Zion could look to leave if New Orleans continues to stagnate.

New Orleans needs shooting, and lots of it. DeRozan doesn't help them improve in that facet, but he's a win-now fringe star who can help push the Pelicans to the playoffs. A trio of Williamson, Brandon Ingram and DeRozan could be appealing and help Zion make his postseason debut.

If GM David Griffin is able to fill out the roster around Williamson, Ingram and DeRozan with sharpshooters, this has the makings of a playoff team in 2021-22 and beyond. The question is, does DeRozan want to roll the dice on a younger team like New Orleans?

DeRozan in Charlotte would be really, really fun. Imagine DeRozan in an up-tempo offense led by LaMelo Ball and surrounded by appealing prospects (such as Miles Bridges, James Bouknight, PJ Washington and Kai Jones). Add in Gordon Hayward and this is a team that’s locked into a playoff spot for the next few years.

In order for the Hornets to fit DeRozan into their cap space, they would need to dump Terry Rozier's $17.9 million expiring elsewhere. And with all the guard-needy teams out there, Charlotte could surely find a suitor for Rozier quickly.

The Hornets are still three years away from Ball's big second contract filling up their books. Why not make a run for DeRozan on a three-year deal reaching upwards of $25 million per season? Like the surprising Hayward move last offseason, this is only the way top-tier free agents will consider signing with Charlotte.

The Grizzlies are another team with an intriguing young core that would have to jump through some hoops to make the money work in order to pursue DeRozan. Memphis received their first taste of the playoffs in the Ja Morant era, and they might be hungry for more now with their young star ready to continue his ascent.

DeRozan would fit perfectly into the Grizzlies’ starting lineup. Memphis needs an aggressive, score-first wing who can also take pressure off Morant. Enter DeRozan, who checks all of those boxes.

However, after Memphis’ pre-draft trade with the Pelicans that brought in Eric Bledsoe, Steven Adams and the No. 10 pick, they’d need to pull off some salary-cap magic to make this work. The Grizzlies would likely need to trade Bledsoe and Kyle Anderson's $9.9 million expiring contract. If those moves happened, Memphis would be at $29 million in available cap space.

DeRozan has mentioned he wants to win championships, so will he be interested in Memphis or any of the other young teams listed here that are still a few years away? That's the big question, but, as we all know, money talks.

This is where things get really interesting. Pat Riley can recruit with the best of them, and Miami's win-now core has a multi-year championship window. Lowry is on his way to join Jimmy Butler and Bam Adebayo in South Beach. Why not have Lowry's best friend DeRozan join them as well?

This is a lineup that completely ignores the modern importance of spacing. However, as we saw in the playoffs, having copious amounts of bucket-getters on the court simultaneously matters.

Miami has limited flexibility to make this idea happen, but it's certainly possible. In a sign-and-trade with San Antonio, Miami would send Duncan Robinson (whom San Antonio has reportedly shown interest in) and KZ Okpala. If the Spurs signed Robinson to a restricted deal around $20 million per year, this fairytale idea could grow some legs. According to Ethan Skolnick of Five Reasons Sports, Miami has tossed around the idea of Lowry and DeRozan as their big-fish acquisitions.

Never count out Pat Riley. We'll see if this type of situation bubbles to the surface here soon.

The Pacers are in an interesting spot. Do they run it back or blow it all up in the near future? Right now, Indiana seems stuck in the middle, and that's not a good place to be. Hiring Rick Carlisle as their new head coach after the disastrous Nate Bjorkgren tenure, the Pacers might feel they can stand pat and see how this season goes before making big changes.

However, the Pacers would be wise to explore all options with their core players, sans Caris LeVert, T.J. Warren and Domantas Sabonis. Pacers owner Herb Simon is about to be 87 years old, so he likely wants Indiana to be competitive again.

If DeRozan intrigues Indiana, perhaps the Pacers can send the salaries of Myles Turner and Jeremy Lamb to San Antonio in a sign-and-trade scenario. Turner, who has been in trade rumors for years now, is also a player whom the Spurs could covet as a long-term piece.

Indiana has avoided paying the luxury tax during Simon’s tenure as owner, and acquiring DeRozan doesn't change that. The Pacers would be able to bring aboard DeRozan, while also re-signing backup point guard T.J. McConnell on a long-term deal.

A win-now core for Indiana featuring DeRozan, LeVert, Sabonis and Warren is very intriguing. However, would DeRozan sign off on playing in Indianapolis for the next few years?

Now we're starting to get crazy, but, again, it's possible. The Clippers will be without Kawhi Leonard most of next season due to a partially torn ACL. Why not package together Luke Kennard and Patrick Beverley and scour the sign-and-trade market? Those two together equal out to $27 million. What about Kennard, Beverley and some second-round picks for DeRozan? Would that interest San Antonio?

Los Angeles would still be able to bring back Reggie Jackson and Nicolas Batum on team-friendly deals in this scenario as well, if Leonard waits to re-sign a big contract.

Imagine a starting lineup of Jackson, DeRozan, Paul George, Leonard and Ivica Zubac. That's a true threat to win multiple championships in the near future.

DeRozan has already expressed his desire to return home. With the Lakers making the Russell Westbrook trade, their assets and cap flexibility are limited. Enter the Clippers, who could make another shocking splash in free-agency.

Free-agency is here, so stay locked into BasketballNews.com for all the latest news and rumors.