Lakers free-agent targets: Players who could fit in Los Angeles

The Los Angeles Lakers made the splashiest move during the 2021 NBA Draft, acquiring nine-time All-NBA player and modern-day triple-double savant Russell Westbrook in a blockbuster trade. By shipping out Kyle Kuzma, Kentavious Caldwell-Pope, Montrezl Harrell and the No. 22 overall pick to the Washington Wizards for Westbrook, Los Angeles pushed its chips all-in on a new Hollywood Big Three.

LeBron James, Anthony Davis and Westbrook will bring the entertainment value on the court, but what about the actual basketball fit? It's clunky, to say the least. None of James, Davis or Westbrook are above-average three-point shooters. Cumulatively, the Lakers' Big Three shot 31.3% from deep last season (LeBron at 36.5%, Westbrook at 31.5%, AD at 26.0%). For a team starving for more floor spacing, adding Westbrook clogs the floor even further.

With that said, the Lakers need to retool their roster around the James, Davis, Westbrook Big 3 with sharpshooters. Lots of them. Luckily for Los Angeles, there are plenty of veterans on the market who will not only be intrigued by ring-chasing with a superstar trio, but also a bigger role than other places due to little three-point artillery.

Here are some perimeter-oriented players the Lakers may target when teams can start negotiating with free agents on Monday at 6 p.m. ET.

There may not be a better option for the Lakers than the OG sharpshooter himself. At age 37, Redick is still draining shots from beyond the arc with the best of them. The one thing that's missing from Redick's resume is an NBA championship. Expected to ring-chase with maybe his final contract upcoming, now is the time for Redick to join a strong title contender. Enter Los Angeles, who could potentially offer Redick a starting role alongside Westbrook in the backcourt.

The most obvious fit on the list is LeBron's good friend, and 10-time NBA All-Star, Carmelo Anthony. For years, many have speculated on Anthony eventually joining the Lakers. Now, this offseason seems like the perfect time to make that happen. After being out of the league back in 2018-19, Anthony has reinvented himself, becoming a reliable three-point shooter. Over the past two seasons with the Portland Trail Blazers, Anthony drained 39.9% of his three-point attempts. At age 37, Anthony has been yearning for the opportunity to finally win his first ring. With the Lakers, that dream could soon become reality. Anthony would be able to play alongside James, Davis and Westbrook as a stretch-4, and could also be a key cog in their second unit as well. Look for this marriage to happen, especially if the interest is mutual. 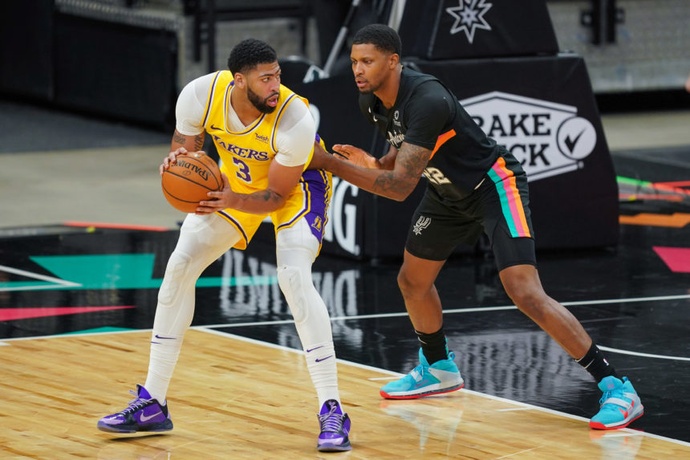 Embracing a full-time bench role over his last two seasons with the San Antonio Spurs, Gay is a great fit for what the Lakers need to win another NBA championship. Gay is a three-level scorer, but one who has improved his deep shot-making over the years. During the 2020-21 campaign, Gay hit 38.1% of his three-pointers, which could be a sign of that number potentially rising with easier opportunities in LA. Gay's bucket-getting ability is a necessity for teams looking to make deep playoff runs, and would be a welcome addition to the Lakers' rotation immediately. Since he's also on the back-end of his career and looking to win the ultimate prize, Gay is another player to watch to take a veteran-minimum deal with the Lakers.

Ellington provides optimum floor-spacing acumen for a Lakers team in desperate need of it. This past season with the Detroit Pistons, Ellington converted on 42.2% of his three-pointers at a high volume (six attempts per game). Turning 34 years old shortly after the 2021-22 season begins, add Ellington to the ever-growing list of veterans on the cheap that would make an instant impact for Los Angeles. Like Redick, Ellington could even become a full-time starter next to Westbrook in the Lakers' backcourt. If Redick signs with the Brooklyn Nets, which has been a rumored destination, Ellington is the next-best name on the free-agent market as an obtainable veteran shooting guard.

[Editor's Note: The Lakers signed Ellington to a one-year deal on Monday evening.]

Since Ennis was playing with the lowly Orlando Magic last season, many may have missed that he shot a career-high 43.3% on three-pointers. Add in Ennis' versatility as a strong wing defender, and he's one of my favorite targets on this list for Los Angeles. Immediately, Ennis would step into the Lakers' rotation as a key cog to their second unit. Although the three-point efficiency jump was on a low volume (2.5 attempts per game), there's no reason to believe why Ennis couldn't repeat that performance with even more wide-open looks coming his way. And to no surprise, Ennis qualifies as a plus-age-30 veteran who could look to ring-chase for a veteran's minimum.

Although he fell out of favor in the Milwaukee Bucks' rotation during their championship run, Forbes was a huge asset as one of the NBA's best floor-spacing sharpshooters. With the Bucks last season, Forbes shot 45.2% on 4.9 three-pointers per game. Throughout his career, Forbes has been a 41.2% shooter from deep. Just imagine the possibilities with Forbes running around the three-point line while James and Westbrook set up endless drive-and-kick opportunities. Forbes will likely command anywhere between $4-7 million annually, and many immediate contenders will be calling for his services. Would Forbes be interested in joining the Lakers' rotation on their $5.9 million mid-level exception? It's a call the Lakers should definitely make once free-agency officially opens.

A 12-year veteran who has proven to be a legit scorer off the bench throughout his career, Mills is a very strong fit for the Lakers as they search for guard depth behind Westbrook. Mills has converted nearly 40% of his three-point opportunities (38.8%), and there's reason to believe career-best numbers could be on the horizon if he were to sign with Los Angeles. Not only would Mills provide three-point shooting acumen, but could run an offense in a pinch — plus create for himself around the basket. The Lakers potentially having Mills and Caruso as their primary backup guards off the bench would be a huge luxury with little cap-space flexibility. Mills on a veteran-minimum deal is another one to watch out for with a win-now veteran rotation player.