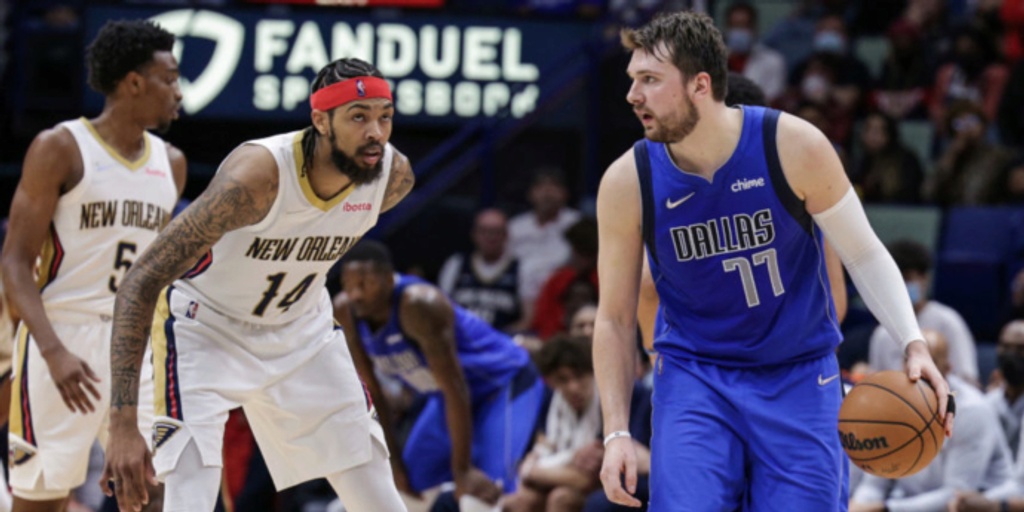 Through all the triple-doubles, buzzer-beaters and three All-Star Game trips in four seasons, Luka Doncic never averaged 40 points over a four-game stretch until the final quartet before the break.

Those games also happened to be the first ones since a trade ended Doncic's European pairing with Kristaps Porzingis that never developed the way the Dallas Mavericks had hoped.

Not that the focus wasn't already on the Slovenian superstar who turns 23 on Monday, but the timing of the 41.5-point-per-game outburst that included Doncic's first 50-point effort made it perfectly clear.

If the Mavericks are going to get past the first round of the playoffs for the first time since winning the franchise's only championship 11 years ago, their point guard will have to dominate.

Nobody knows it better than the point guard from 2011: Jason Kidd, who helped guide a club led by another European star in Dirk Nowitzki.

“Luka’s that type of player that can carry the load, for not just four games but for most of the season,” said Kidd, the first-year Dallas coach. “He’s playing not just at an All-Star but at an MVP level right now, and that’s what we need going into the second half.”

The Mavericks return from the break Friday night at Utah, which is one spot ahead of Dallas as the fourth seed in the Western Conference. Denver is the third team in the current mix for the final spot with home-court advantage in the first round, something else the Mavericks haven't had since winning the title.

A few hours after Porzingis was dealt to Washington in a deal that brought Spencer Dinwiddie and Davis Bertans, Doncic scored 28 points in the first quarter of a 112-105 victory over the Los Angeles Clippers. He finished with a career-high 51.

In a rematch two nights later, Doncic scored 23 of his 45 points in the fourth quarter of a 99-97 loss, the only defeat in the four-game stretch. He had 49 in a victory over New Orleans after missing two late free throws.

“It was just games,” said Doncic, who was busy from 3-point range during the four games, going 22 of 48. “I know everybody talks it was after the trade, after something. It was just games. Sometimes you feel good, sometimes you don't. I just felt good.”

The Clippers and coach Tyronn Lue prefer to focus on making Doncic a scorer because they think he's more dangerous when he's distributing as well.

Indeed, just before the scoring burst started, the franchise leader in triple-doubles had four in a six-game stretch. The 51-point night ended a career-best run of seven consecutive games with double-digit assists because the game was close and Doncic had to keep scoring.

“He showed his ability to go get a bucket when he needs to, day in and day out, while keeping everybody involved,” said Marquese Chriss, a one-time Doncic antagonist in Golden State who became his teammate this season when the Dallas roster was decimated by a COVID-19 outbreak.

“Some people can score but get away from the offense and get away from having their teammates be themselves as well,” Chriss said. “I feel like everybody was able to contribute in the games.”

Since Doncic returned from a career-long 10-game absence because of knee and ankle injuries and a positive COVID-19 test, the Mavericks are 18-6. Defense is a big part of the surge, as is the star guard.

Before the time away, Doncic was criticized over his conditioning and weight, and acknowledged he relaxed too much after helping Slovenia qualify for its first Olympics and reach the semifinals before losing twice at the Tokyo Games last summer. While he made his third consecutive All-Star team, Doncic wasn't voted a starter for the first time.

“I think he was humbled a little bit,” owner Mark Cuban said in an appearance on a local radio station this week. “I think he didn’t like being called out for his weight and other things, and it finally clicked that there’s a level of discipline that’s required.”

The latest scoring flurry from Doncic tops his run in the 2020 playoffs, when his buzzer-beater to even the series in Game 4 against the Los Angeles Clippers was the talk of the playoff bubble. Doncic had two 40-point games and just missed a third in a six-game loss in his postseason debut.

Doncic doesn't figure to keep the 40-point pace going as the Mavericks figure out the new pecking order among scorers without Porzingis. It's worth noting that shooting guard Tim Hardaway Jr. should return for the playoffs after missing at least two months with a broken left foot.

The Mavericks know who's likely to have it going on most nights.