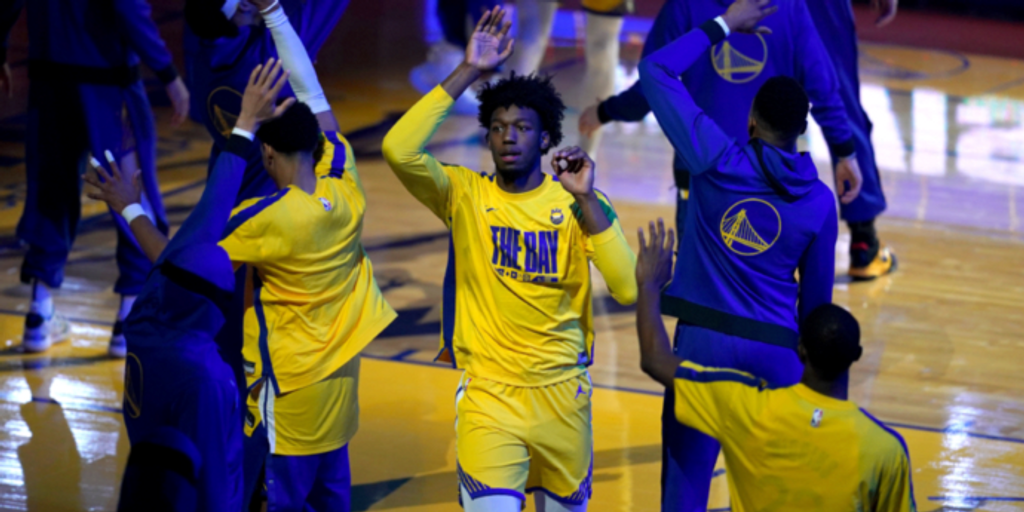 Long-awaited return of James Wiseman will fill Warriors’ only void

When the Golden State Warriors won the right to the second overall pick in the 2020 NBA Draft, the prevailing sentiment was that the rich were getting richer.

And as he nears his 2021-22 season debut, Wiseman may end up being instrumental in determining whether the Warriors can truly hit the jackpot.

According to Dieter Kurtenbach of the Bay Area News Group, Wiseman will return to the lineup for the Warriors on March 1 when the team opens up a four-game road trip in Minnesota. For Golden State head coach Steve Kerr, the second-year big man will probably be a sight for sore eyes.

During his rookie campaign, Wiseman had some flashes of brilliance, but his first stint was cut short after he suffered a torn meniscus last April. Now, about 10 months later, Wiseman will be joining a club that has since seen Steph Curry return to being an MVP-caliber contributor and Klay Thompson return to its lineup looking as strong as ever.

Andrew Wiggins has become an All-Star, while Jordan Poole has become one of the league’s most effective reserves. From Jonathan Kuminga to Gary Payton II to Otto Porter Jr., the Warriors have gotten consistent, high-level production across the board.

But what’s even better for Wiseman is this: He represents what is perhaps the only glaring need on the club — depth up front.

For the sophomore, opportunity knocks.

With Draymond Green still on the shelf due to a nagging back injury, Kerr has gone to smaller lineups, with Kevon Looney remaining the only true 5-man pivoting the paint for the club.

But as serviceable as Looney has been as the team’s starting center, his lack of a scoring punch on the offensive end has been one of the few weaknesses that the team has had. Despite being one of the league’s top defensive teams, the Warriors' relative mediocrity on offense has been apparent in some of the close contests they’ve lost this season.

Fortunately for Golden State, that’s the area where Wiseman has shown the most upside.

And fortunately for him — unlike during his rookie season — he will have the luxury of playing off of the likes of both Curry and Thompson. Wiseman won’t be the focus of any opposing team’s scouting report, and that is what will help him quickly become a difference-maker for the Warriors.

As a rookie, in just 21.4 minutes per game, Wiseman managed to score 11.5 points and grab 5.8 rebounds per contest. More impressive, though, was the fact that he connected on just under 39% of his shots that came from beyond 16 feet of the basket.

It’s hard to imagine him not being the beneficiary of more open looks playing with a relatively healthy club. With his size and athleticism, he will give Kerr a type of big-man weapon that hasn’t been at his disposal during the Warriors’ dynasty run, and that’s with all due respect to Andrew Bogut.

Looney is the only player on the team’s roster to appear in all 59 Warriors games this season, and he’s started each and every one of them. He himself admitted to being a little beat up and he, more than anyone else, was looking forward to the break.

In comes the 20-year-old savior.

-The 5on5 scrimmage
-The procedure in December
-Frustration of rehab
-Weight room work
-Value of patience
-Staying off Social Media
-Hobbies outside of hoops pic.twitter.com/lpYJGagOnz

As always, the Western Conference playoffs will be incredibly competitive. But the Warriors will enter play on Feb. 24 with the league’s top Defensive Rating (104.8) and third-best Net Rating (plus-7.0). With only 23 games remaining on their regular-season schedule, they trail the Phoenix Suns by 6.5 games for the conference’s top seed. It would take a relative collapse on the part of the Suns for them to yield the position to the Warriors, but with Chris Paul set to miss the next 6-to-8 weeks, the possibility can’t be completely dismissed.

In most instances, the most highly-touted young players don’t get drafted into situations where they’ll be flanking future Hall-of-Famers still in their prime or joining rotations with championship aspirations. And when they have in the past, those players haven’t usually been afforded the opportunity to play meaningful minutes during the chase.

Wiseman is original in that sense.

As a prospect, it’s difficult to not be excited by his size and potential, and for the Warriors in particular, he fills one of the few needs on the team’s roster.

Usually, teams that are 42-17 don’t end up adding difference-making pieces with fresh legs this late in the season. Golden State, though, will soon receive that infusion.

Already considered the cream of the West, the rich will indeed get richer.

To the tune of a 7-foot big man with an impressive offensive repertoire, Steph Curry, Steve Kerr and the rest of organization remain hopeful that Wiseman can help them cash in.

After being selected with the No. 2 overall pick less than two years ago, the timing seems just right; he’ll now have every opportunity to make good.