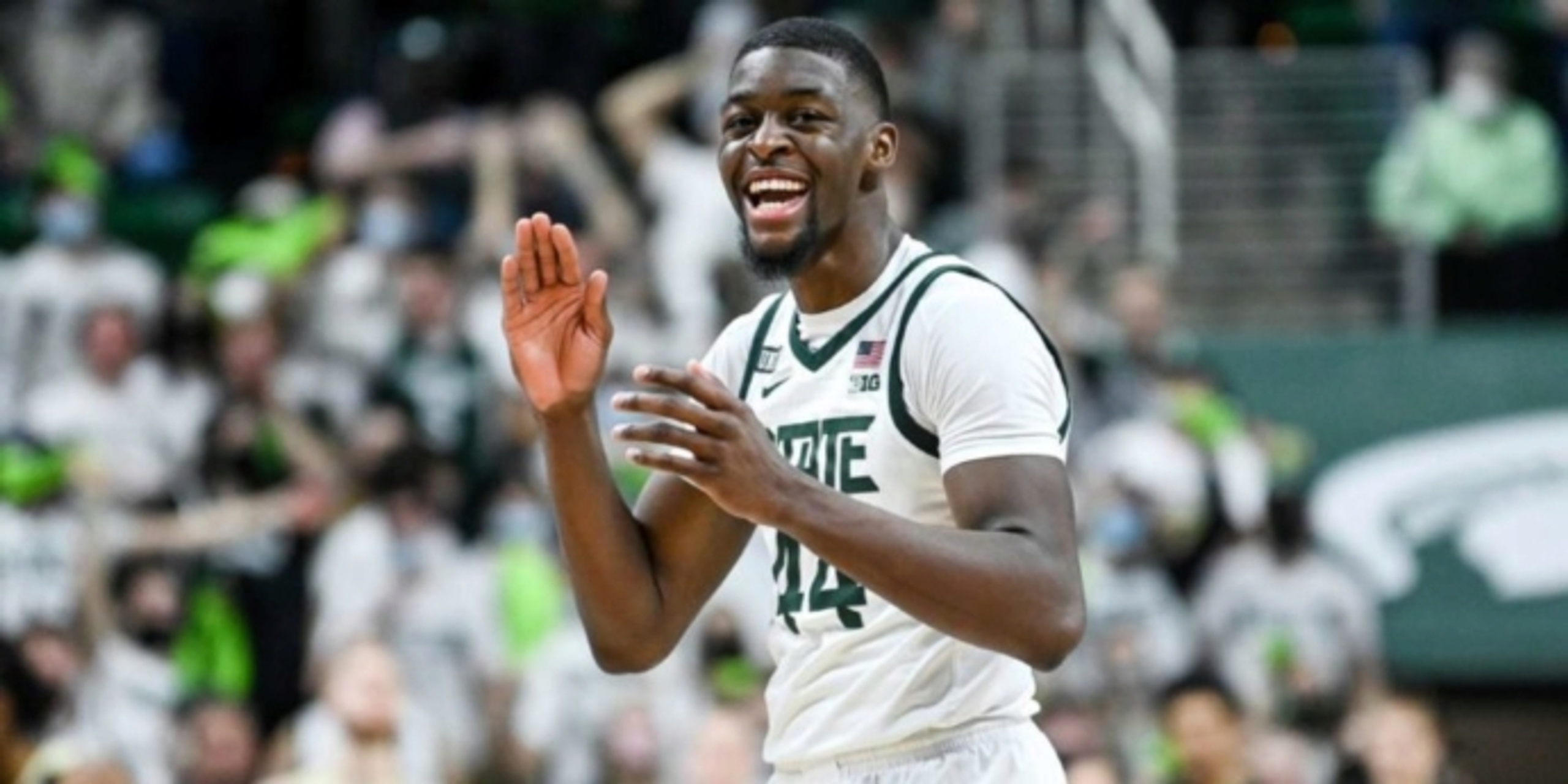 As former Michigan State forward Gabe Brown goes through the NBA pre-draft process, he wants front offices to know one thing: he knows his role, and he's perfectly fine being a 3-and-D player.

"Usually when guys come in, they think they’re going to take the world by storm and [become a star] and get the keys to the team, but that’s not really how it works," Brown told BasketballNews.com. "There are already other players on the team who have paid their dues, and they may be All-Stars or champions. What I’m looking to do is be a 3-and-D guy who looks to put the ball on the floor sometimes, but that’s not always going to be my job. My job is usually going to be locking up guards, defending 1-through-4, [providing] athleticism and being consistent with my shot.”

After spending four years with the Spartans, the 22-year-old has started working out for NBA teams (including the Boston Celtics, Brooklyn Nets, Atlanta Hawks and New York Knicks), and he recently participated in the G League Elite Camp in Chicago.

He has modeled his game after two other older prospects who spent at least four years in college: Phoenix Suns forward Cameron Johnson and Brooklyn Nets wing Joe Harris.

“I try to be myself as much as possible, but the guys that I really do look at are Cam Johnson and Joe Harris," Brown said. "They are guys who have been through four years of college and then made it and were successful in the NBA. And they played around [talented] guys and then worked their way into their role, so those are guys that I really try to pay attention to.”

BasketballNews.com caught up with Brown to discuss his skill set, how much he developed while in college, his experience at the G League Elite Camp, how he fell in love with basketball and more.

Throughout the pre-draft process, everyone talks about age. But there are also benefits to spending four years in college. Do you think staying at Michigan State for four years and gaining that experience helped you?

Gabe Brown: “I just feel like my maturity level is higher than a lot of kids who come in earlier, and that’s due to just being in college for so long and staying for four years. And I have to say: you learn the game more, you develop more when you’re in college for four years. You know how to play NBA basketball when you get done with college, so I feel like my game will truly expand when I get to the next level."

How much have you grown as a player from your first day in college to where you’re at now?

Brown: “It’s been a whole change for me—my maturity level, my work ethic, just everything has changed for me in a lot of positive ways.”

The knock on older prospects is that they sometimes don’t have as much potential or room to grow. What would you say to that and what do you think of your ceiling?

Brown: “I don’t believe that’s true. I believe that I’m just getting started. I just turned 22 years old in March, so I’m still very young. I don’t think I’ve reached any of my potential yet, and I’ve got a lot of time. [Giving me an opportunity] in the NBA is the perfect way to see.”

Which teams have you worked out for so far? And who do you have scheduled?

Brown: “I’ve worked out with the Boston Celtics, Brooklyn Nets, Atlanta Hawks and New York Knicks. And as for upcoming workouts, I basically have the whole league that I have to work out for, so I have about 12-to-14 more NBA workouts upcoming.”

You participated in the G League Elite Camp. How did that go, and what was that experience like?

Brown: “It was very fun to be out there. It was very fun, truly. Not a lot of kids get to be invited to these camps and take them in, and I was one of the kids who got invited to the G League one. It was a great experience. I went out there and I played two good games. I was looking for a call-up, but it’s all good. I mean, my path, my journey is different. It was fun, though. The atmosphere was amazing.”

Which of your skills do you think will best translate to the NBA?

Brown: “My defense, my length, my shooting ability, my size and my athleticism. That will all translate to me being out on the floor on an NBA court.”

Off the court, what are some things you bring to a team?

Brown: “I lead by example with my work ethic. I stay in the gym more and [come back] during the night. That’s what I do. I feel like guys will respect me more just off of the way I work. And then, it’s all about personality. I’m a leader, I love to talk, I love to get guys going and I love to motivate people. That’s no problem with me.”

As you go throughout this pre-draft process, what are some of the things you’re trying to showcase to teams—on and off the court?

Brown: “On the floor, I’m just trying to showcase my whole game—all of the things that I couldn’t [show] at Michigan State or the things that I wasn’t good at but that I really am good at that scouts didn’t really get to see, like putting the ball on the floor, coming off ball screens, making reads, maintaining my consistent shooting level and being in tip-top shape. Off the floor, I just want to show them the person that I am. I’ll always be myself. I’ll always be Gabe Brown.”

I read that growing up, your favorite player was Kobe Bryant.

Brown: “I was a big Kobe fan. Just his mentality and the work ethic… I mean, everybody knows Kobe can score, and he’s got championships, but nobody saw the work he really put in to get there. I think the motivating factor is just his work, what he did off the court, how he motivated guys and got guys going. And he always showed up when it was game time.”

How did you initially fall in love with basketball?

Brown: “It was my father. My dad put a ball in my hands at 3 years old and I haven’t looked back since.”

(Gabe’s father, Charles Brown, passed away in 2016 after suffering a stroke.)

I’m so sorry for your loss. You’ve said that you considered quitting basketball after he passed away, and that it felt like “there was no point in playing anymore… it felt like the game of basketball left me." How did you ultimately decide to continue playing and use basketball to honor him by wearing his No. 44?

Brown: “It was a tough process. I still think about it to this day and it’s never going to leave me. But I had my family behind me and they were totally supportive, and I had my coaches and everybody else being fully supportive. I just decided that I didn’t want to give up on myself and give up on what I accomplished, so [I kept playing]. No. 44 was his number, and all of my brothers wore it, so it was my turn to wear it.”

If an NBA executive asks, “Why should I draft you?” What would be your pitch?

Brown: “I would have to say, 'I’m gonna go hard, I’m gonna give everything that I’ve got and I’m not gonna take the opportunity for granted.'”