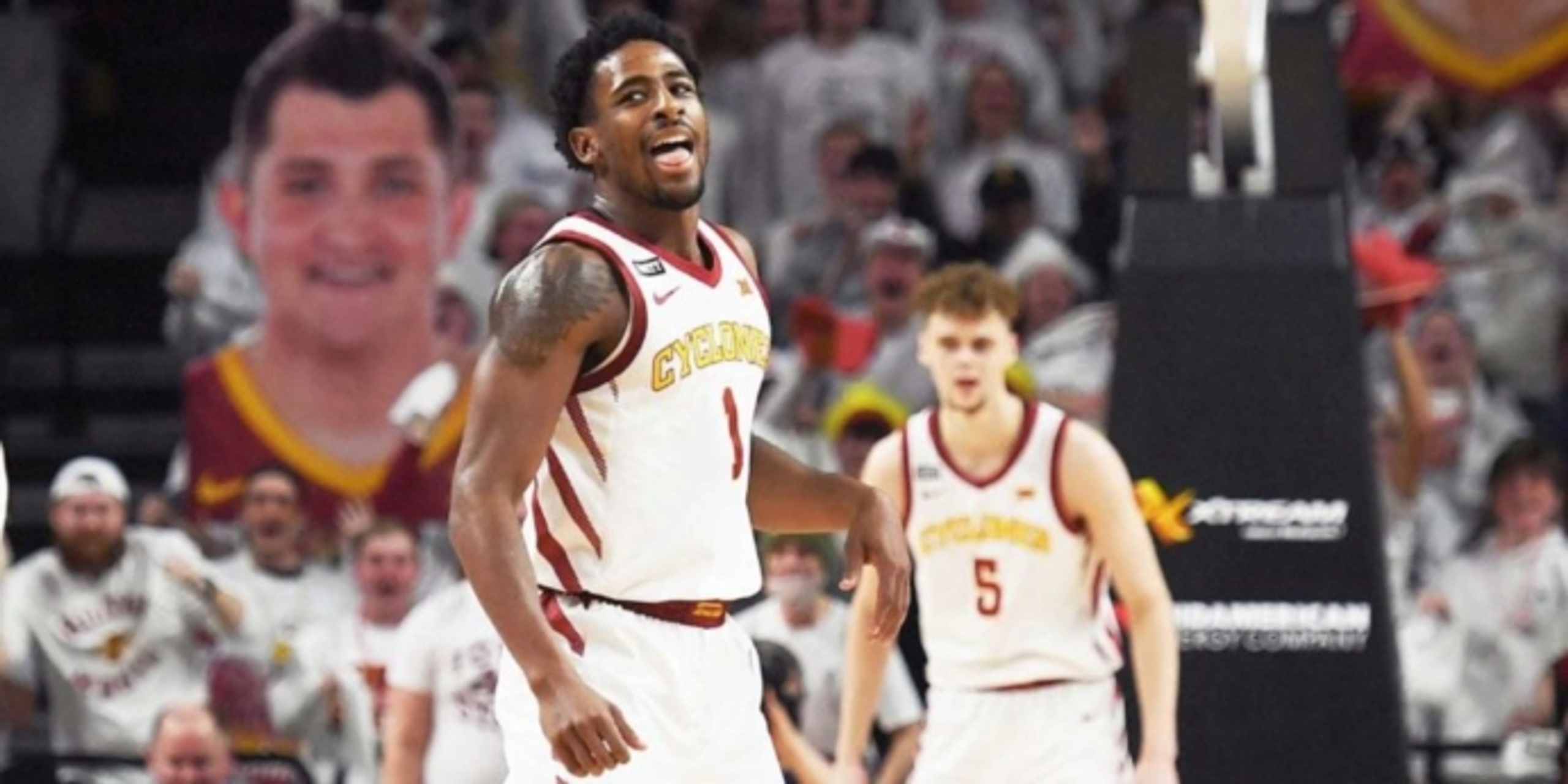 On Dec. 9, 2021, highly-touted 2022 NBA Draft prospect Keegan Murray and his Iowa Hawkeyes were traveling to Ames for an in-state rivalry game. The 6-foot-8, 225-pound forward was leading the nation in scoring with an average of just under 24 points per game (on a scorching 59.3% clip from the field), and the Hawkeyes were averaging over 90 points per contest at that point.

Through rigorous film study, Brockington observed Murray’s favorite spots on the court, where he liked to catch the ball and how he got his buckets. And from the tip, the 6-foot-4, 200-pound guard followed through. He denied post-entry to Murray time and time again, helped the helper and put pressure on the Hawkeyes on the perimeter.

By the end of the night, Brockington outscored and outrebounded Murray while holding him to the worst game of his season by far (9 points on 4-of-17 from the field), while simultaneously delivering the game's most efficient performance with 29 points, 10 rebounds, 2 assists and 2 steals.

“I feel like that was definitely one of my best games of the season. I really came into that game wanting to shut him down,” Brockington told BasketballNews.com in a phone interview. “I went out there and really tried to take away his strengths and mainly speed him up. I feel like he was really good when he was allowed to play at his pace and when guys were giving him space to work and see what was going on on the floor. So, I really came into that game wanting to lock him down on defense. And then, the 29 points, that was a bonus really.”

Unlike Murray, who’s projected to be a lottery pick in most mock drafts (including No. 6 overall in BasketballNews.com’s latest), you surprisingly won’t find Brockington’s name anywhere on those big boards. And no, you won’t find him partaking in this week’s NBA Draft Combine nor the G League Elite Camp. Considering his size at the guard position coupled with his ability to rebound, make high-difficulty shots and, most importantly, defend at a high level, it’s a head-scratcher.

Take into account that Brockington spearheaded a 22-win Iowa State program that won just two games the season before, an NCAA-record turnaround, and it just seems like a downright mistake. So, he’ll just have to prove that he stands out and find other ways to turn heads — just like he did last December.

“I feel like my work ethic allows me to catch guys that a lot of people deem 'better' or would rank higher [than me]," Brockington said. "I feel like I have the intangibles that other people don't. I have athleticism, and I have the dog mentality — somebody who just loves to compete and loves to win and isn't gonna let somebody just walk all over them.

“I love to compete. I attribute it to being from Philly. We just never back down from a challenge. The intangibles, I feel like, set me apart. And then, with my work ethic, all of these things that people say I don't have, I'm working every day and I'm ready to show everybody that I do [have them].”

Having just worked out for the Atlanta Hawks, Brockington’s list of interested teams is growing. According to sources, the Toronto Raptors, Phoenix Suns, Los Angeles Clippers, New Orleans Pelicans, Los Angeles Lakers, Indiana Pacers, Sacramento Kings, Utah Jazz and Brooklyn Nets are lined up next — and he has five other teams who asked to schedule workouts at Tandem’s Pro Day on Friday.

Brockington’s lone season at Iowa State went down as the best of his college career, and he considers it the most fun he had playing basketball at the collegiate level because the roster was brand-new and had something to prove.

As a senior, he averaged 16.9 points and 6.8 rebounds per game, was named to the All-Big 12 First Team and earned the 2021-22 midseason John Wooden award. Boasting the Cyclones’ highest usage rate (27.5%), he took on the most responsibility he had to that point and ran with the opportunity.

Defensively, Brockington attributes much of his success (93.2 Defensive Rating) to the players he had to guard along the way. Starting in the Big 12, a conference he refers to as “ridiculous” in regards to talent, match-ups against Kansas standout Ochai Agbaji and Baylor’s Jeremy Sochan and James Akinjo helped iron sharpen iron. The nights were intense and featured high-level basketball.

This past season, Brockington was adept at cutting off catch-and-drives (0.47 points per possession, per InStat) and defending pick-and-roll ball-handlers (0.54 PPP). It’s something that he believes carried over his time at Penn State, where he spent two seasons prior to transferring.

“We were really big on defense, so it was really about angles over there. And then, going to Iowa State, Coach TJ [Otzelberger] and our whole defensive scheme was non-stop pressure and to get guys to go into our help,” Brockington said. “But I feel like... you can push guys to your help, but it's better to be able to guard somebody and not need the help. I feel like, yeah, I definitely would try to cut guys off so that it's not forcing us to rotate and create long closeouts. Little things like that just help you stay more compact on defense and just stay more locked on your man.

“So at Iowa State, we would drill things like [pick-and-roll defense] — getting over screens, being able to communicate and getting over and under, and just sticking on the ball-handler, making it tough for them. But, I also feel like I can thrive in an all-switching situation because I have strength and I have explosiveness. I feel like when I get caught down in the post, I can front or just make it tough for bigger guys to get easy position. I feel like I can thrive in either system, for sure."

During his two years with the Nittany Lions, he took on different roles and began to blossom under Pat Chambers. Again, there was plenty of talent to face-off against in the Big Ten, such as current Chicago Bulls guard Ayo Dosunmu at Illinois, San Antonio Spurs forward Joe Wieskamp at Iowa, Indiana Pacers guard Duane Washington and future NBA Draft pick Johnny Davis at Wisconsin. Stylistically, Brockington believes the Big Ten’s physicality helped prepare him too.

At Penn State, Brockington reconnected with his longtime friend Lamar Stevens. The now-Cleveland Cavaliers forward performed night-in and night-out for the team, showing Brockington the consistency and hard work it takes to be successful. Stevens has been in his ear throughout the pre-draft process, sharing what needs to be done and how to stick in the league. Brockington appreciates the support and encouragement, and he's taking every bit of that advice.

(Brockington’s collegiate basketball odyssey actually began at St. Bonaventure, the first of three schools he’d attend. Playing for Mark Schmidt for one year, he and the Bonnies had a solid season led by seniors Jaylen Adams and Matt Mobley. Brockington ultimately transferred to Penn State to be closer to home and ended up sitting out a season, by rule, before suiting up).

As far as translatable skills go at the next level, Brockington states that his defense and rebounding top the list, along with his athleticism and ability to get downhill. 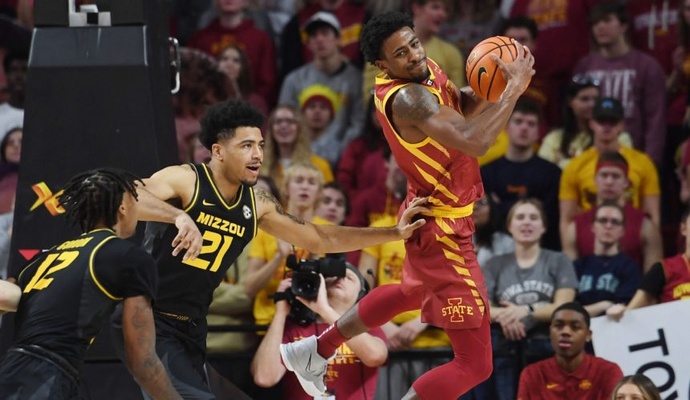 In addition, Brockington takes pride in being well-versed in any kind of role. At St. Bonaventure and early on at Penn State, he did a bit of everything — serving as a spot-up shooter, a slasher, a rebounding specialist and a sixth man. He even played spot minutes off the bench at one point.

At Iowa State, he was a go-to guy, a star player and a leader for the first time in his college career, so opposing defenses threw everything but the kitchen sink at him.

“Against certain teams — Texas comes to mind specifically — [they were], like, face-guarding me. [Texas] Tech would have a guy pressure and they would have dudes sit in gaps and essentially try to force me off of the ball. Seeing double-teams and all of that was new," Brockington said with a laugh. "It was just crazy being guarded like that in college 'cause I'd never had to deal with things like that before. I feel like those things really pushed me to be able to adapt and really try to just make smart decisions."

On the offensive end, Brockington has an appetite for the mid-range. The sly southpaw is able to get to his spots quickly off the ball and fire away with his leaping lefty jumper, and he likes to attack off the catch (with fireworks often following). Though he admits that is the area where he’s most comfortable at the moment, Brockington understands the importance of being a three-level scorer.

“I mean, [the mid-range] is an underappreciated part of the game. But a lot of analytics guys will tell you that it's inefficient, and that's probably true for most guys. That's just not the case with me. I feel like when I take mid-rangers, I create enough space horizontally and vertically to be able to get a clean look off.”

Despite spending five years in college, Brockington is only 22 years old because he graduated from high school early. Possessing that much experience at his age, he considers it an advantage. At the same time, Brockington says age doesn’t have to do with his ability to play the game, pick up new information and improve as a player.

“It hasn't been a typical college journey, but one thing that's remained the same is everywhere I go, I put my head down and work. I went out there, I produced and I was out there trying to win."

For Brockington, growing up in Philadelphia, he’d always attend his father Antoine’s rec-league games and hear stories about him. Antoine was a hell of a pro in his own right, achieving tremendous success overseas after an impressive career at Coppin State, where he won the 1997-98 MEAC Player of the Year award — and Izaiah looked up to him proudly.

Now, as the pre-draft process begins, it’s Izaiah Brockington’s time to carve his own path and make him proud.