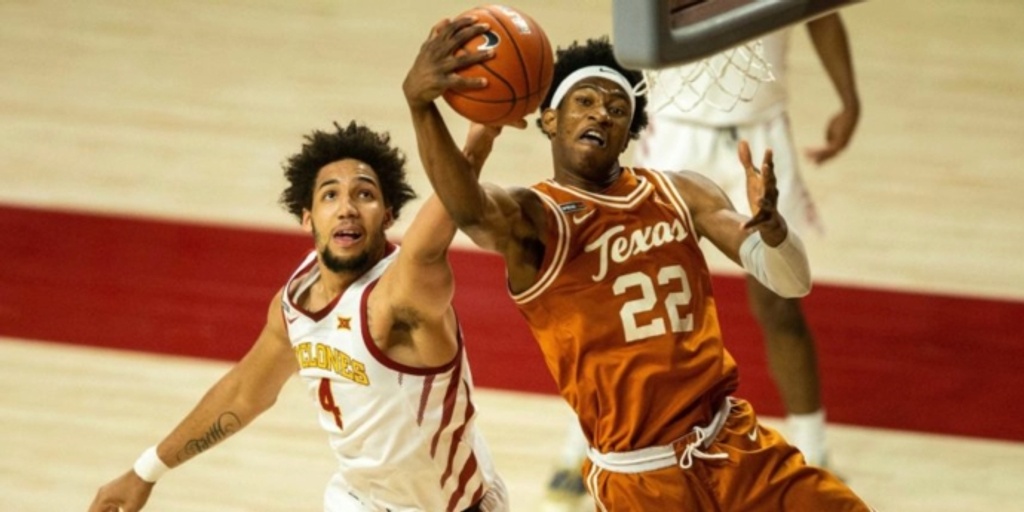 With the 2021 NBA Draft just days away, BasketballNews.com's Lead NBA Draft Analyst Matt Babcock has put together a list of the top available prospects by position. He recently listed the draft's top point guards, shooting guards, small forwards and centers.

Here are the best small forwards in this year's class:

Although he had a disappointing freshman season at Duke (in which he left his team early), Jalen Johnson possesses an intriguing combination of strength, athleticism, and playmaking skills. Considering his abilities as a ball-handler, distributor, and finisher at his size, he’s one of the more talented forwards in this year’s draft class and he has a ton of upside.

At 6-foot-11, Jones teased with his athleticism and offensive tools this past season at Texas. He will need to develop his physical strength and add polish to become a high-level NBA player; however, his long-term ceiling is extremely high. At the end of the lottery, he might be worth the risk.

Due to his length and leaping ability, Isaiah Jackson is a premier rim protector. He will need to add physical strength, but his presence in the interior is felt on both ends with his mobility and explosion. A bit raw on the offensive end, he's flashed decent touch and the ability to play above the rim. Jackson could serve as an effective rim protector, rim runner, and roaming big.

A sniper as a shooter and an effective defender, Trey Murphy III came into his own at Virginia after transferring from Rice. He doesn't excel in creating for himself, but as a movement and spot-up shooter, he can be incredibly valuable to just about any NBA offense. Considering his size, length, mobility, defense, and ability to stretch the floor, Murphy is a viable option in the first round.

Known mostly for his defensive prowess, Usman Garuba causes problems for opponents all over the floor with his length and explosiveness. He is instinctual at the rim, as both a protector and play-finisher. Aside from his positive contributions on the defensive end, his offensive abilities have been somewhat of a concern for some time now. This past season in Spain, Garuba’s three-point shooting improved greatly, providing real hope that his game might translate to the NBA better than initially expected.

Thor is undoubtedly one of the most intriguing prospects in this class. He's long, rangy, and fluid for his size. He also has the ability to shoot the deep ball and protect the rim. Thor is a potential diamond-in-the-rough who could make a great impact at the next level if it clicks. He likely won't be ready to contribute early in his career, but the physical tools and skill set are worth betting on.

Although he isn't the flashiest player in the class, Jeremiah Robinson-Earl projects to be a reliable contributor. He averaged 15.7 points and 8.5 rebounds this past season, showing that he's willing and able to do the little things necessary for team success. He's a strong rebounder, screen-setter and passer, and he has flashed the ability to stretch the floor as well.

Kessler Edwards is a proven shot-maker who excels in both three-point shooting and scoring in the post. He has good size at 6-foot-7 and a knack for doing all the little things well. Edwards is a disciplined and active team defender who can provide a decent amount of switchability. While he doesn't have a ton of upside, he looks to provide solid value on both ends of the floor in versatile roles.

Isaiah Todd is an impressive athlete with good physical tools that he uses to his advantage, making him a difficult assignment for defenders. Todd averaged 12.3 points and 4.9 rebounds in 15 games this past season for the G League Ignite. He has good length at 6-foot-10 and has shown the ability to stretch the floor, as he shot 36.2% from deep. If he is able to improve his decision-making and discipline, Todd could likely tap into his significant potential.

Greg Brown III is arguably the most explosive athlete in the draft. His leaping ability off one or two feet is incredible, which led to many highlight plays at Texas this past season. He has a high motor and a knack for attacking the offensive glass. He has shown flashes of being able to shoot from outside and make plays on the offensive end. However, his basketball IQ and self-awareness as a player seem to be lacking. Considering his level of athleticism, overall physical tools and raw talent, Brown should still be selected somewhere in the first round.

Isaiah Livers is one of the best shooters in this draft, especially off movement. He has NBA size for a wing at 6-foot-6 and he was a career 41.2% three-point shooter at Michigan. He likely won't be relied upon to create much offense at the next level, but his ability to stretch the floor will likely provide him an opportunity.

Hauser projects as a stretch big at the NBA level due to his impressive shot-making ability. He excelled at Virginia shooting off movement and the standstill, and has shown he can hit big-time shots from the mid-range as well as from deep. Hauser is one of the older players in this Draft cycle at 23 years old, but his skillset is one that organizations covet. Look for him to get a good NBA opportunity next season.

Hurt was one of the best three-point shooters in the country last season, knocking dow 44.4% of his 126 attempts. After being ranked No. 12 in the 2019 RSCI, he had an underwhelming freshman season at Duke. As a sophomore, he came into his own as a scorer and showed that he can contribute on the interior as well as the perimeter. He's tough on the glass, has good size, and projects as a stretch four at the NBA level.