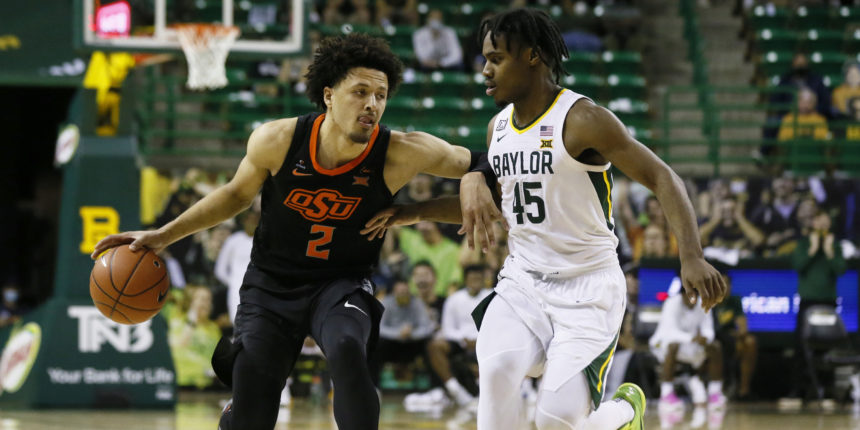 With the 2021 NBA Draft just days away, BasketballNews.com's Lead NBA Draft Analyst Matt Babcock has put together a list of the top available prospects by position.

Here are the best point guards in this year's class:

Widely considered the favorite to go No. 1 overall in the 2021 NBA Draft, Cade Cunningham has very few holes in his game. At 6-foot-8, he can play multiple positions including being a floor general who can carry his team’s offense in crunch time when necessary. He has a tremendous basketball IQ and is improving as a shooter. Although he is not an elite athlete, he is perhaps the safest bet to have a long and successful NBA career of all the players in this year's draft.

Suggs’ intelligence and feel may be the best of any prospect in this draft class. He’s a true point guard on the offensive end who has superior toughness and court presence. He is also a capable defender who has shown glimpses of the two-way star that he could become. If he is able to improve his consistency as a shooter, he will provide high-level value in the NBA for years to come.

Josh Giddey has continued to improve at a rapid rate throughout this season in Australia. While he isn't overly athletic, at 6-foot-8, his court vision and basketball IQ shine through in everything he does on the court. An intelligent initiator with positional size and versatility, Giddey is a valuable asset in today's NBA.

After a memorable season that saw his Baylor Bears win the national championship, no one has helped themselves over the past year as much as Davion Mitchell. An elite, physical, and pesky on-ball defender and a much-improved outside shooter and playmaker, Mitchell has entered the conversation as a possible lottery pick.

One of the best shooters in college basketball this past season - both off of the dribble and from catch-and-shoot opportunities - Jared Butler was a key part of Baylor’s success. In addition to spreading the floor, he showed that he’s an effective playmaker, as he constantly created open looks for his entire team. On the defensive end, he is a pest on the ball, often disrupting ball-handlers creating turnovers. Butler is a highly intelligent player who is impactful on both ends of the floor. From a talent standpoint, he is more than capable of being a solid, reliable guard in the NBA.

Cooper's impact on offense is undeniable. He is the best passer and facilitator in the draft, and he has an ability to collapse defenses and make jaw-dropping passes on the move. He has elite court vision, but he’s also a crafty finisher at the rim. He's undersized and his ability to shoot from deep is a big swing skill, but he's shown that he should be able to run an offense at the next level.

Having vastly improved from his freshman to sophomore season, Tre Mann, a 6-foot-5 combo guard, has solidified himself as one of the better guards in this year’s draft. His footwork, pull-up shooting, creativity, passing, and ability to play on or off the ball make him a hot commodity.

Mostly known for his defensive prowess and frustrating opposing ball-handlers, there is more to McBride's game than just that. He averaged nearly 16.0 points per game while hitting 41% of his three-point attempts this season, giving promise to real two-way impact at the next level. He is a bit undersized for his position, but he's a hard-nosed competitor who makes winning plays.

Nah'shon "Bones" Hyland is a skilled guard who easily has legitimate NBA range as a three-point shooter. In two seasons at VCU, he hit 39.9% of his 331 three-point attempts. He broke out as a sophomore, averaging 19.5 points per game. He lacks the ability to play as a true point guard, but he's a good playmaker who can create looks for both himself and others. If he cleans up his shot selection and defensive discipline, he projects nicely at the next level.

At 6-foot-4 with a powerful frame, David Duke is a lead guard who can score on multiple levels. He plays with a good combination of burst and change-of-pace as he attacks the rim. He was also able to knock down 38.9% of his three-point attempts this past season. Duke's rim finishing and jump shooting will need to be more consistent at the next level, but he has the tools and toughness to carve out a role in the NBA.

Although a bit undersized at 6-foot-1, Marcus Zegarowski excels as a facilitator, playmaker, and shooter. He connected on 42.1% of his three-point attempts this season, while attempting 6.6 per game. He's reliable as a pull-up shooter and is solid as a lead ball-handling facilitator. The former Creighton Bluejay has potential to serve as a solid backup point guard at the next level.

A point guard in high school, DJ Steward earned a spot in the McDonald's All-American Game due to his speed and playmaking ability. At Duke, he was asked to play off-ball more than ever before, averaging 13.0 points and shooting 34.0% from deep. Look for him to play on-ball more at the next level as he continues to improve as both a distributor and shooter.

At 6-foot-3, Daishen Nix is an excellent passer with great vision, and he averaged 8.9 points and 5.1 assists in 16 Bubble games for the G League Ignite this season. He has a powerful frame and has shown the ability to create for his teammates at a high level. He'll need to improve his engagement and technique on defense, but there is a lot to like in Nix as a primary ball-handler.

David Johnson is an intelligent, anticipatory passer on offense, and an instinctual playmaker on defense. Johnson's outside shooting has been streaky throughout his two seasons at Louisville, but he plays with a strong basketball IQ and can provide value on both ends of the floor. He projects well as a defensive-minded, facilitating backup point guard.

Jason Preston was one of the most productive players in the country last season, leading Ohio to the NCAA Tournament. He has a unique ability to facilitate for teammates, while also knocking down 39.0% of his shots from deep. He had a 38.5-inch max vertical at the NBA Combine, and is a viable option for being selected in the 2021 NBA Draft.