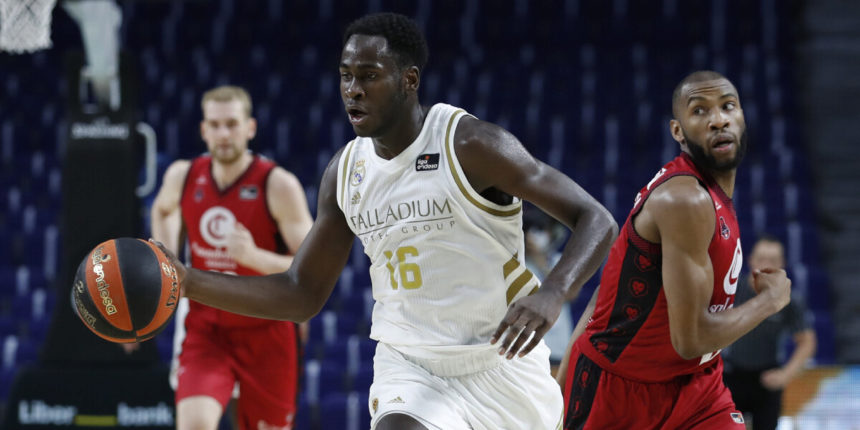 For a few years now, Usman Garuba has been widely projected as a first-round pick and the best international prospect born in the year 2002. He joined Real Madrid when he was only 11 years old, and really came into his own in 2016 when he dominated the 2016 FIBA U16 Europe A Tournament as a 14-year-old, where he averaged 16.3 points, 12.4 rebounds and 2 assists per game.

Listed at 6-foot-8 and 230 pounds, Garuba is a powerful, intelligent, energetic forward who has seen valuable EuroLeague minutes as a teenager, and has continued to progress and develop over the course of this season. Having recently turned 19 years old in March, Garuba is a young prospect whose defensive activity and rebounding continue to stand out as his most projectable skills. He uses his powerful frame, 7-2 wingspan and feel for the game to his advantage, as he’s a tenacious rebounder on both ends. He has also flashed the ability to be a multi-positional defender.

While he’s known most for his physical tools, motor and rim protection potential, his recent notable progression has come as a shooter. Garuba’s ability to shoot the three has long been his swing skill and the primary concern from an evaluation standpoint for scouts. Over the duration of his young career, he’s been inconsistent -- and passive -- as a shooter, which has raised the question of whether or not that part of his game could ever be reliable. I’ve had some conversations with NBA personnel regarding his shooting, and the key point of those conversations has alluded to the inconsistency of his footwork and placement of his off-hand.

Here’s are his three point shooting statistics over the past few seasons:

Although the percentage for this season doesn’t stand out, his performance the last few months has caught my eye.

Since Dec. 1, 2020, Garuba has connected on 24 of 61 attempts from behind the arc (39.3%). His recent success shooting the ball has given me real hope that his value and projection as an offensive player at the next level could be higher than I once thought. It’s also promising to see Garuba’s huge jump in shooting volume, as he’s already tripled his output from the previous season. Garuba has shown this year that he’s willing and able to take open shots, and often contested ones, as well.

In recent film that I’ve watched, it’s evident that Garuba’s been working to improve his jumper. His release still isn’t the quickest, but his pre-shot footwork has become cleaner and his delivery now wastes little motion, and he remains balanced and composed, not rushing into his shots as much as he did early in his career.

Most of his offensive value has come from getting downhill and attacking the rim, or as a cutter because he excels in scoring on the move at the rim. Adding a perimeter game could open up tons of opportunity, both for him and his team’s offense moving forward. With an extended range and growing confidence on offense, paired with his motor and defensive promise, Garuba seems to be trending up.

Keep an eye on Usman Garuba as Real Madrid continues its season, and as we inch closer to the 2021 NBA Draft.