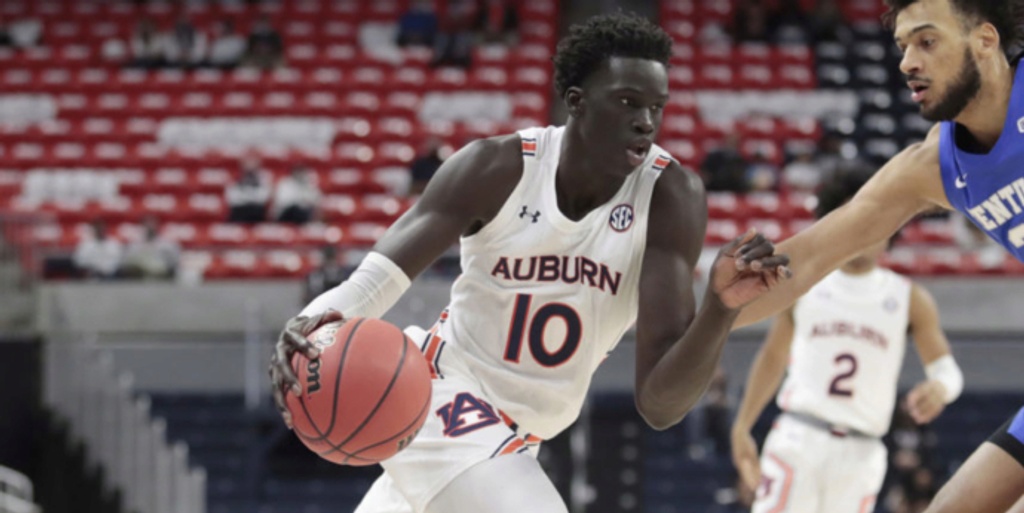 Although I evaluate most of the top prospects while they’re in high school, one prospect that I did not see until he reached the college level this past season was JT Thor of the Auburn Tigers. However, we did have him on our priority watchlist from the get-go, thanks to my colleague Derek Murray, who had seen him while he was in high school:

Coming into the season, Thor was on my radar as a player that had the potential to be one-and-done. I liked his size and he showed flashes of skill while he was in high school. However, in watching Auburn vs. Alabama this past January, that's when I really started to think that Thor could turn pro following his freshman season. In that game, Thor posted 15 points, 9 rebounds, 3 steals and 4 blocks. He created some momentum for himself that seemingly carried through conference play.

In 27 games this past season, Thor averaged 9.4 points, 5.0 rebounds and 1.4 blocks per game for the Tigers. Though those are decent numbers for a true freshman, it is not the typical stat line for a high profile one-and-done NBA prospect. Despite Thor’s modest production, he was able to show his physical tools and raw talent this past season.

At 6-foot-9 with a 7-foot-3 wingspan, Thor moves fluidly and has a natural high skill-level that, albeit unpolished, provides a great foundation. I don’t think anyone felt that Thor was a no-brainer to be in this year’s class, but he has constantly shown enough flashes of talent and upside to emerge as a legitimate prospect for the 2021 NBA Draft.

In early June, Derek and I had the chance to watch Thor work out. We both walked away even more intrigued by Thor as a prospect.

Seeing Thor up close in a workout solidified my thoughts about his long-term potential. His movement is as fluid as you could ask from a 18-year-old kid pushing 6-foot-10, and he really understands how to use his length on both sides of the floor. He has smooth mechanics as a shooter and continues to flash great upside as both a scorer and rim protector.

At the NBA Draft Combine in Chicago, Thor continued to show me more of the same, which piqued my interest. I do not think Thor is ready to contribute at a high level in the NBA right away, but he has the potential to become an athletic, versatile and skilled face-up big who can shoot the ball from outside, rim run, and block shots, which has me excited about his future.

The problem is that there is always risk with players that have a significant amount of untapped potential. The fact of the matter is that, oftentimes, it’s hard to accurately project if, and how, young players will develop.

Thor is certainly rough around the edges as a player, and the uncertainty of his development will likely see him slip past some teams. However, he also might be a diamond in the rough. Currently, in our latest updated 2021 NBA Mock Draft, we have Thor being selected by the Utah Jazz at No. 30.

Will teams regret passing on Thor? Only time will tell.