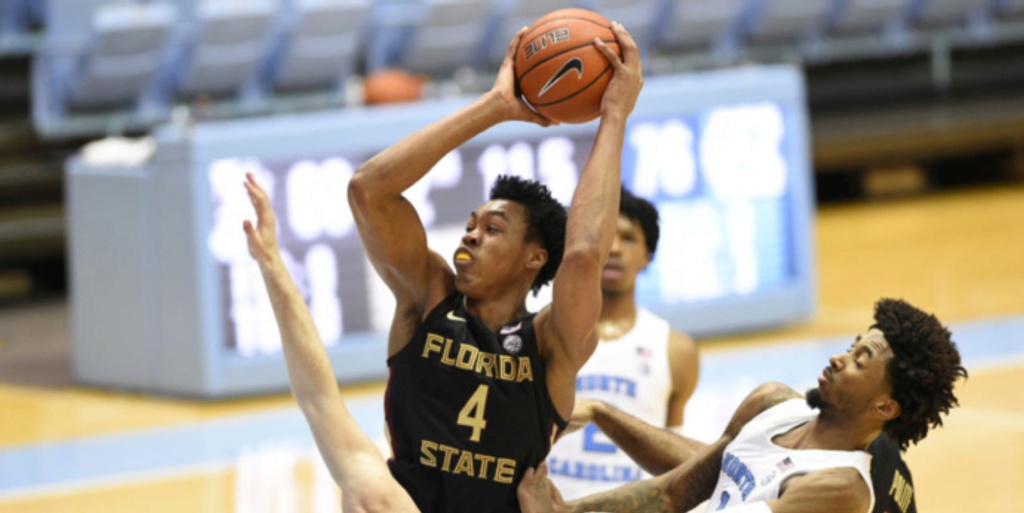 The 2021 NBA Draft is less than three weeks away, so BasketballNews.com is breaking down the best prospects in each conference. Today, we’ll look at ACC players to keep an eye on.

When talking about versatility in this year’s class, you don’t have to look far to get to Scottie Barnes. What makes Barnes so unique as an athletic, 6-foot-8, 225-pound freshman is his high level of impact as a playmaker on the offensive end, with the potential to guard up to five positions on defense. While his size suggests he’ll translate smoothly as a forward to the NBA, he played and defended the guard position over the course of last season. His 4.1 assists per game came from the combination of his very unselfish style of play, the utilization of his height to see over defenses, and effectively navigating ball screens.

On the other side of the ball, his 7-foot-2 wingspan allowed him to get deflections and make opposing players uncomfortable, which created advantages for Florida State. What’s also evident is his communication and effort on defense — two things that are very appealing to NBA decision-makers.

What limits Barnes is his scoring ability, as the numbers and film suggest he was not very effective or comfortable as a shooter. Off the ball, he can play as a cutter, but the percentages are less favorable when out on the perimeter (without him initiating the offense and getting downhill). At his NBA Combine Pro Day, Barnes displayed some improved mechanics and fluidity to his jump shot, so it will be interesting to see how it translates to the next level. Scouts rave about his passion and energy on the court along with his charismatic personality off of it.

Scottie Barnes is projected as the No.6 pick to the OKC Thunder in our latest mock draft.

The Duke Blue Devils continue to attract top-ranked high school prospects, and Jalen Johnson was expected to be the next star to carry the torch for another season of deep tournament runs. Unfortunately, that didn’t happen and his season was cut short by an injury and a decision to leave the team (which was questioned by scouts and fans alike). However, Johnson is still a tantalizing talent with major potential as an athletic, playmaking, combo forward.

From day one, he should be able to provide high-level athleticism, fill the lane in transition and either finish at the rim or find open teammates with his passing ability. He’s also a good ball-handler, which makes him a grab-and-go threat on the defensive boards. Speaking of defense, he has upside as a prospect who can guard all frontcourt positions and has the tools to stay with guards, although he’ll have some work to do before a team should feel comfortable on switches against the NBA’s best guards.

The last few years of Johnson’s career have been questioned by scouts, as he bounced around teams and left college early. Johnson was projected to be a top-six pick at one point, but he could fall out of the lottery if teams feel more confident about other prospects. While teams will want to see how he’s moving post-injury and how well his shot is coming along, the pre-draft interviews could end up being drastically more important for Johnson during these final weeks.

Jalen Johnson is projected as the No. 9 pick to the Sacramento Kings in our latest mock draft.

In every recent draft, teams have been highly valuing 3-and-D prospects because their skill set obviously translates to the NBA and they can immediately contribute in two important areas of today’s NBA. Elite three-point shooters who can also lock down the opposing team's best offensive player are highly coveted. One of the next players in this mold is Trey Murphy III of Virginia. Murphy III is an elite catch-and-shoot three-point shooter who should contribute right away when stationed around the perimeter. On defense, his 6-foot-8, 206-pound frame and a 7-foot wingspan make him a tough on-ball defender who can cover up to four positions.

While Murphy III has mostly flown under the radar this season, the pre-draft process is really exposing how much of a translatable skill set he has and how he can be utilized on the NBA level. Although not all players stick in the NBA, finding a role is half the battle and Trey Murphy III checks the boxes that teams need. Don’t be surprised if his name is called in the first round.

Trey Murphy III is projected as the No. 25 pick to the L.A. Clippers in our latest mock draft.

A high-school teammate of projected No. 1 pick Cade Cunningham and projected lottery pick Scottie Barnes, Day’Ron Sharpe also had some high expectations entering this season with the Tar Heels. Sharpe is a 6-foot-11, 265-pound presence on the interior and he uses that frame to excel as a rebounder, especially on the offensive glass. Scouts love his ability to outwork the opposing team’s big men for 50-50 balls, block shots, and be a play finisher around the rim. Something that jumps out when watching him play is his potential as an interior playmaker that a team could run some inside-out offense through at times.

While Sharpe isn’t a tremendous athlete, his motor and second-jump quickness make up for it. He didn’t stretch the floor during his year at UNC, but he did display some touch during his pro-day shooting drills, providing optimism that he can add that to his game in the years to come.

Day’Ron Sharpe is projected as the No. 33 pick to the Orlando Magic in our latest mock draft.

Although Jalen Johnson didn’t have the opportunity to impact Duke for a full season, D.J. Steward was the other freshman tasked to lead the Blue Devils for Coach K. Steward is a speedy 6-foot-2 combo guard who doesn’t only use speed to create advantages on the floor. As a guard who is slightly undersized, he impressed by showing a quick first step and converting well around the rim on drives in the halfcourt and in transition. His shooting numbers are interesting considering that he shot better off the dribble than in catch-and-shoot situations. Steward shot 81.1% from the free throw line, which suggests his 34.1% from beyond the arc could rise.

Steward’s role at the next level needs some time to solidify. Right away, he projects as a combo guard who may play more off-ball as his playmaking will need some time to develop. However, he also needs to gain more consistency as a spot-up shooter to play off-ball. What could get Steward on the court is his on-ball defense, especially as his body strengthens.

D.J. Steward projects as the No. 48 pick to the Atlanta Hawks in our latest mock draft.

The premium on shooting in the NBA will always benefit any prospect who was a 40%+ volume three-point shooter. Sam Hauser fits that profile; he has good size as a combo forward at 6-foot-8 and he shot nearly 44% from three throughout his collegiate career at Marquette and Virginia. “Big Smooth” has a smooth stroke he displays in shots off the catch and even some flashes off the dribble or using turn-around jumpers in the post. He also played well as a cutter, finding open lanes for easy baskets and making plays for his teammates doing the same.

Hauser is a solid prospect who has the ability to fit within a team’s offense to provide a major floor spacing threat. If the rest of his game is able to adjust to NBA-level size, speed, and athleticism, he’ll be an impactful glue guy.

Sam Hauser is projected as the No. 54 pick to the Indiana Pacers in our latest mock draft.

David Johnson is a talented player who had some intrigue coming into his second season with the Louisville Cardinals. As a lead guard, Johnson makes his impact as a pick-and-roll ball-handler who can make high-IQ plays in the halfcourt. At 6-foot-5, he has elite positional size to defend both guard spots as well as the length to cover ground as a help defender. Although he had struggles shooting the ball from deep his freshman year, he returned as a sophomore and shot a much-improved 38% from three-point range.

Although he doesn’t offer much off-the-dribble creation as a scorer, if Johnson can consistently put pressure on the defense as a passer and scorer from inside and out while also effectively defending opposing backcourts, he’ll find a role in the NBA. He also had a solid showing in the Combine scrimmages that displayed his ability to defend and fill a stat-sheet in various ways.

David Johnson is projected at the No. 56 pick to the Charlotte Hornets in our latest mock draft.

Check out our breakdown of the top 2021 NBA Draft prospects in the Pac-12 and the Big Ten.